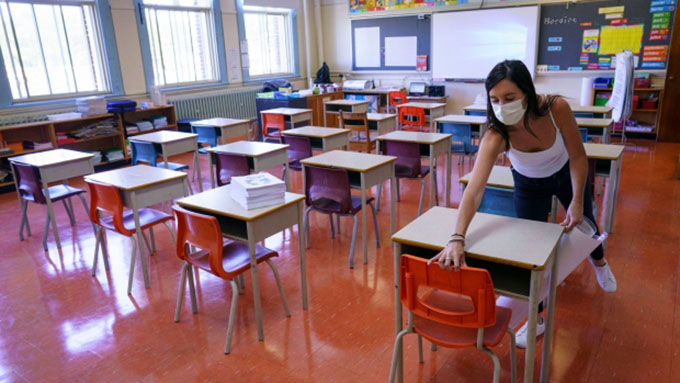 In recent weeks, the incidence of COVID-19 in Spain has increased . In addition, recent scientific evidence shows that minors seem to be infected between a third and a half than adults and that if they are older than 10 years, they are just as contagious as adults . Given this situation, the concern of families and teachers about planning to return to classrooms in the safest possible way has increased.

The issue affects all educational stages, from early childhood education to university. In the case of universities, their representative bodies, in many cases, approved plans during the month of July based mainly on occupational safety protocols for their workers .

The measures set by the communities

To return to classrooms safely, the main thing is that the incidence of the disease is low (for example, less than 25 cases per 100,000 inhabitants in the last 14 days).

Currently, all the autonomous communities far exceed these incidence values. Despite this, the authorities have decided to start the course and have agreed on unified measures for the entire territory .

Among them are some necessary ones, based on scientific evidence, such as the mandatory use of a mask even if a distance greater than 1.5 m is maintained for all students over 6 years of age and for teachers – with more reason, because they will speak more frequently -. It is also recommended to wash your hands on a regular basis and ventilate the classrooms on a frequent basis. In addition, it is encouraged to take classes with the windows open.

However, it will also be mandatory to measure body temperature for students and teachers. This measure has been shown to be of doubtful efficacy , since a significant percentage of those infected, especially if they are minors, may not show fever and, in general, the disease is much milder .

In addition, some autonomous communities (Galicia, Catalonia and Andalusia, for example) propose to carry out PCR tests, despite the fact that the test may be negative because, for example, the viral load is low if the infection is recent .

Finally, it is also recommended to reduce the ratios per classroom, the blendedness and follow the isolation protocols once a case is detected.

The latest scientific evidence shows that in addition to being transmitted by drops or fomites (by contact with surfaces where there is an active virus), the virus can be transmitted by aerosols.

More than 200 experts asked the WHO to include aerosols among the main modes of transmission of COVID-19. The institution listed the new route of transmission as secondary, even though it appears to be relevant in a healthcare setting or isolated, such as a cruise ship .

Despite the fact that the possibilities of contagion in the courtyard, dining room, changing rooms or school entrance should not be neglected, students spend most of their time in classrooms. That is why it is very important to prevent these from becoming high-risk areas.

Transmission by aerosols can be of little relevance in open spaces, unless the safety distance is not respected or there is physical contact. However, in closed spaces such as the classroom, even if the safety distance is respected , this route can represent an important part of the transmission of the disease if the space is not well ventilated or the use of masks is limited.

In short, in addition to the mandatory use of masks and the need for them to be well adjusted , the quality of the air and ventilation , the duration of classes and a low number of students per classroom, not only to reduce transmission but also to facilitate traceability, they have to be factors to take into account when scheduling the next course.

Everyone should wear a mask inside colleges and universities. But how can we lower the concentration of the virus in the air in case someone is infected?

In New York, outdoor teaching was already chosen during successive tuberculosis pandemics at the beginning of the 20th century and it is being promoted from the mayor’s office for the next academic year. By the way, there are very few areas in Spain where the average temperature in autumn and winter is lower than in New York, so the cold should not be an impediment. In this sense, recently several city councils, such as Barcelona , have offered those responsible for regional Education facilities and parks.

If teaching abroad is not feasible, different experts have created a spreadsheet to estimate the probability of transmission of COVID-19 by aerosols based on the local incidence of the epidemic, the number of infected people, the size of the classroom, occupation, duration of class, percentage of people with a mask and type of mask, temperature, humidity ( the virus remains active less time for low relative humidity ) and ventilation and air purification, among others variables.

Regarding ventilation and air purification, we must remember that knowing said quality is not only important as an indicator of virus concentration, but also influences the concentration of students and teachers .

To estimate air quality, we can measure CO medir concentration in a simple and relatively inexpensive way. In fact, the Belgian Government will facilitate the acquisition of CO₂ meters for all classrooms in the country. CO₂ concentration values ​​should be below 800 ppm. From the CO₂ concentration we can calculate the ventilation of the space.

How to improve ventilation

Obviously, the first option is to use natural ventilation to reduce the virus concentration. It is highly recommended to have the windows open, as Belgium is going to impose for the next course.

The ventilation rates of the different teaching spaces range from 0.1-8 ACH ( air changes per hour ) for a primary school to between 2 and 12 ACH for a university classroom . The ACH variable expresses the fraction of initial air that remains in the classroom, a value of 1 means that after one hour 36% of the initial air remains.

If natural ventilation is not sufficient to improve air quality, which is the case in many older buildings, forced ventilation is necessary. Outside air should be used and not recirculated, since the latter seems to be the reason for some of the lights in restaurants . In addition, ventilation devices should have filters installed, at least of the MERV-13 type .

Finally, if the classroom cannot be naturally or mechanically ventilated, it is advisable to install HEPA air purifiers to minimize the risk of transmission, even though they are expensive.

In short, following what is indicated in this guide from the Harvard School of Public Health to ensure the ventilation of classrooms, the ideal is to improve ventilation systems, incorporate air purifiers (or, at least, humidifiers), perform maximum outdoor activities and open doors and windows to achieve at least 5 ACH (air changes per hour) in 100 m² classrooms occupied by 25 students.

The foregoing does not exclude the mandatory use of masks, hand hygiene, regular cleaning of surfaces and material, and maintaining a safety distance to minimize the transmission of SARS-CoV-2.

A recently published study has estimated that the rate of transmission of COVID-19 in 22 summer camps for children under 12 years of age, with monitoring of cases in bubble groups , constant hand hygiene and activity mainly outdoors (although also with indoor activity) was relatively low. From the initial 30 cases of COVID-19, which had contact with 253 children, only 12 secondary infections occurred. This infection rate is almost six times lower than that of the general population.