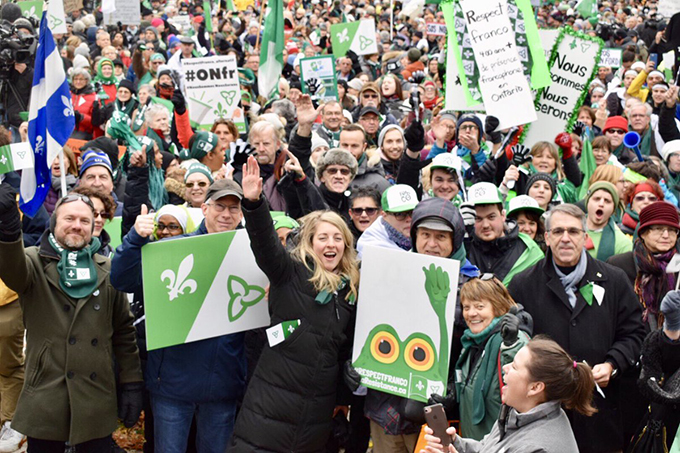 The Government of Ontario’s hasty decision to cancel plans and funding for the Université de l’Ontario français recently generated an outpouring of protests and a surge of solidarity with the university founders, with close to 13,000 signatures being added to one of several online petitions.

In French-speaking media, journalists explored what it could mean for francophones to establish a hub in Toronto and historians were roused to comment about generations of dialogue and advocacy among Franco-Ontarians for French-language education.

So what has become of Université de l’Ontario français? Has the blow, delivered by the Ontario’s government, even after funds were promised during the recent election, totally thwarted the university’s establishment, vision and plans?

In 2017, Université de l’Ontario français was already established by law under Schedule 43 of Bill 177. The university’s first board of governors was appointed in April 2018 and a small team has been in place since December 2017. With a network of some 100 Canadian and international academics and experts, the first wave of academic programs was developed. Yet the process of having programs approved is now on hold.

While funding from the government of Ontario has been suspended for an indefinite period, the crisis has had the merit of introducing Université de l’Ontario français to a large audience.

Judging by multiple offers of collaboration and financial support, the public is in solidarity with empowering the francophone community into post-secondary education.

Recently, the Government of Canada announced $1.9 million in fundingfor the university to establish a foundational francophone hub with its partners.

As one of the researchers and advocates involved in creating this new university, let me share an overview of how Université de l’Ontario français was gradually designed.

In 2013, provincewide consultations about the state of post-secondary education in French-speaking Ontario had built on decades of government reports to identify a priority of establishing a university.

Université de l’Ontario français is rooted in the francophone community of central and southwestern Ontario, which has approximately 250,000 francophones but lacks a dedicated French-language university.

Multiple studies and consultations demonstrated the need and strong demand for such a university in central and southwestern Ontario.

The new university’s charter, on the other hand, specifies that it must “support governance by and for the French-speaking community by conducting the affairs of the University in French.”

In 2017 a planning board for a French-language universityrecommended that it be established in downtown Toronto in order to serve the province’s central and southwestern region and then Ontario’s culturally diverse Francophonie as a whole.

Simultaneously, and continuous with reflecting this local reality, it is a university that aims to be connected with the world.

As such, the board of governors was composed of an equal number of men and women, with independent members reflecting an ethnocultural diversity, different age groups and different skills required to become successfully established.

Focus on competencies for the future

The planning board’s report also examined the competencies needed for the labour market and society of the 21st century, as well as innovative practices in post-secondary education. The board recommended that the university not become, as some would have wanted, a scaled-down version of larger conventional universities.

Rather, it recommended a university that is reflective of its time and one that focuses on the strengths and characteristics of its environment — globalized, multilingual, multicultural and francophone urban. Further desired was being a place that contributes to important modern-day issues such as digital and ecological transition, population mobility and equitable economy.

The planning board consulted with leaders in industry, the public and community sectors in order to better grasp what was expected of today’s graduates.

It examined several institutions so as to get a better idea of possible innovative models, including Université de Hearst and Quest Universityin British Columbia. Inspiration was found in Laval University’s practice of having students choose a study profile emphasizing outcome competencies, Concordia University’s efforts to link the arts, sciences and social sciences, Brock University’s co-op, career and experiential education, and Queen’s University’s “major maps”: a resource that suggests to students possible career outcomes of different types of study.

Planners also looked at U.S. universities (Goucher College and Northern Illinois University), and compelling international schools such as the Free University of Bozen-Bolzano in Italy and Azim Premji University in India.

Taking into account the particularities of the francophone communities that the university intends to serve, the following four program areaswere chosen: studies in human plurality, studies in urban environments, studies in globalized economy and studies in digital cultures.

A team of professors and experts developed these programs in relationship with a teaching and learning approach resting on four principles: being transdisciplinary, supporting inductive and experiential learning and developing key competencies for now and the future.

The first bachelor’s programs in these areas were developed based on an assessment of over 150 programs of study offered in Québec and Ontario in the same fields.

In Toronto’s city centre, the university would bring together just over a dozen community organizations, institutions and businesses for a vital francophone hub of knowledge and innovation — a vibrant, culturally diverse francophone neighbourhood of sorts in Toronto.

In short, Université de l’Ontario français has positioned itself as a 21st-century university.