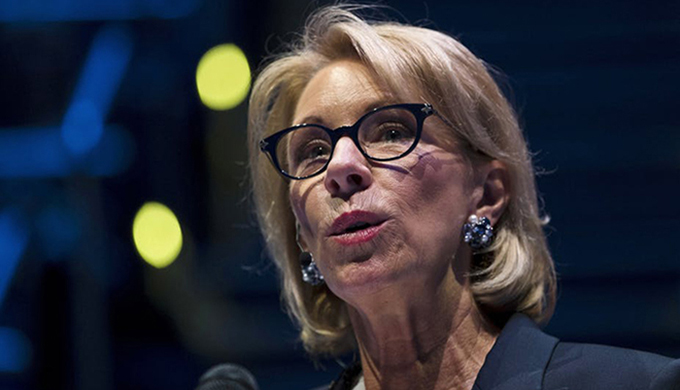 In her resignation letter, Secretary of Education Betsy DeVos explained that her sudden departure from the administration was motivated by President Donald Trump’s incendiary words to the crowd that went on to ransack the U.S. Capitol on Jan. 6.

“There is no mistaking the impact your rhetoric had on the situation,” she declared, “and it is the inflection point for me.”

Interestingly, DeVos has a history of using some rather caustic and divisive language herself. Although she never encouraged or condoned the use of force to achieve political ends, her insulting characterizations of public educators as “sycophant[s] of the ‘system’” and “Chicken Littles” will leave a troubled legacy of their own.

Much like democracy, public education is an enterprise that relies on a basic civic faith that Americans can come together as a nation and in their communities to do worthwhile things that benefit all. Traditionally, the secretary of education plays a key role as a rhetorical leader who brings the country together to face its educational challenges. But that has rarely been the case with DeVos.

As recently as October she used her position to warn that an “unholy mob” of young socialists who “hate freedom” are using a “Marxist playbook” to attack “the family.” Rhetoric like that in her speech to Hillsdale College reflects an affinity for blaming that DeVos shares with her former boss.

As I have warned elsewhere, such routine blaming leaves the impression that any meaningful conversation on an important issue like education will devolve into a war of accusations.

And that can leave not just the nation’s Capitol but also public education defenseless before a tide of extremism.

Although college readiness, access and affordability are more important now than ever – particularly for people of color and those who are low-income – Betsy DeVos sadly did little to address these issues.

Expanding Pell Grants – the major source of federal aid in defraying tuition costs for low-income students – should have been the focus of the Department of Education to ensure more people can afford college. The same is true of the growing crisis of college debt, which now stands at a record US$1.7 trillion and counting.

While it was up to Congress to reauthorize the Higher Education Act – a federal law that regulates federal student aid, among other things, and effectively funds higher education – passage wasn’t a priority for the leadership in the department, and it didn’t happen. This was particularly troubling in light of the fact that state funding for higher education has declined by 18% in the last two decades.

Also, instead of a focus on the divisive issues of charter schools, choice schools and vouchers, the nation’s schools needed a laser-like focus on teaching. This is especially true when it comes to recruiting and retaining good teachers. But here, too, the Department of Education under DeVos’ leadership played little to no role. In fact, DeVos pushed back on efforts to provide teachers with needed professional development.

The Department of Education also fell short in terms of how it dealt with the COVID-19 pandemic. In spite of the escalating rate of hospitalizations and deaths, no issue was as important to America’s future – in my opinion – as its long-term impact on education. After months of school being largely online, K-12 students were projected to start the 2020-21 school year with significant losses in reading and math. I believe the Department of Education’s support for remote learning was minimal at best, based on conversations I’ve had with school superintendents throughout the nation.

It was a total disaster for poor children. More than 1 in 4 children experience food insecurity, and children in those homes similarly lack online access.

When Donald Trump was elected in 2016, there was little doubt that he would appoint a secretary of education who would support private school vouchers, oppose teacher unions and be reluctant to enforce civil rights statutes. That agenda is consistent with every Republican administration going back to Ronald Reagan. Why, then, did Betsy DeVos become “the most unpopular person in our government”?

What set her tenure apart was not what she did – it’s that she personified those policies.

Unlike her predecessors, DeVos had no relevant experience in public education. She was never a governor or state legislator like Lamar Alexander, or a legal scholar of education like Shirley Hufstedler, a K-12 teacher and school administrator like Terrel H. Bell or a university professor like William Bennett.

Also unlike her predecessors, she never attended public school herself, nor did she send her children to public schools.

Instead, she made her mark as a political donor and philanthropist. Her advocacy for private school vouchers culminated in her founding of the American Federation for Children in 2010.

Upon taking office, she embarked on a “Rethink Schools” tour. Almost 40% of the schools she visited were private. “Even when DeVos has visited public schools, she has tended to bypass traditional neighborhood schools, instead making stops at charter schools and other schools of choice,” The Washington Post noted in 2017.

In short, DeVos stood out because she embraced the role of privatization advocate – a role she never relinquished. She made no pretense about this advocacy. For her, all that’s required for schooling to be considered “public education” is public funding and use by the public, meaning that private schools can provide “public” education. DeVos, from the moment of her appointment, became a powerful symbol. That, more than any action she took while in office, set her apart.

Betsy DeVos made it clear in her confirmation hearings that she believed that public schools were not “working for the students that are assigned to them,” while she refused to answer direct questions about whether she intended to work to privatize public schools.

In her four-year tenure as secretary of education, it could be said that her biggest achievement was making the role of the U.S. Department of Education less prominent, and, similar to Donald Trump, undoing that which was done during Barack Obama’s tenure. DeVos made no bones about her dedication to school choice programs, attempting to include $400 million in the 2018 budget, which Congress rejected. She later argued that some of the funding in the Coronavirus Aid, Relief, and Economic Security Act – better known as the CARES Act – intended for public schools should be designated for private schools.

Her administration dramatically slowed the approval of Public Service Loan Forgiveness, which forgives federally subsidized student loans after a period of 10 years for public servants: that is, people who work for governmental agencies or for nonprofit organizations. As well, she curtailed borrower defense practices meant to protect consumers from predatory lending from for-profit colleges that might close before students earn a degree. She also scaled back the TEACH Grant program, which gave future teachers federal money for college if they agreed to teach for a length of time in a high-need area.

While many of these actions have noticeably impacted educational policy, almost all of them can be overturned quickly in a new administration through direct administrative action. Few, if any, of DeVos’ school choice plans were codified and passed into law, making her legacy one of controversy and little action.

One of the great questions at the start of Betsy Devos’ tenure was whether she would enforce the federal education law signed by President Barack Obama at the end of his second term. Four years later, we know the answer: She did not try to undermine the federal testing regime instituted by the Every Student Succeeds Act of 2015.

At her contentious confirmation hearing in January 2017, Sen. Maggie Hassan, a New Hampshire Democrat, asked DeVos if she thought Congress took the right approach in preserving federal guardrails in education. One of these was the requirement that states test students annually in grades 3-8 and once in high school in reading and math. DeVos replied: “I believe that Congress made great strides in returning the responsibility for education primarily to states and localities, where it belongs.”

Former Sen. Al Franken, a Minnesota Democrat, for one, was not sure whether DeVos really supported or understood the testing requirements of the law. After listening to her apparently struggle to explain the difference between testing for proficiency or growth, Franken replied: “It surprises me that you don’t know this issue.” Every Democratic senator, and two Republicans, voted against her nomination. DeVos became secretary only because Vice President Mike Pence cast the deciding vote. Before the vote, Franken said: “It was the most embarrassing confirmation hearing that I have ever seen.”

Senate Democrats, it turns out, did not need to worry about DeVos’ commitment to federal testing requirements.

In the spring of 2019, the U.S. Department of Education warned Arizona that it could lose $340 million in federal education funds. Why? Because their state education plan did not use a single test for all high school students in the state. Arizona wanted to offer school districts a “menu of assessments,” but the Trump team rejected that plan.

Miguel Cardona, President-elect Joe Biden’s choice for secretary of education, has reaffirmed his commitment to federally mandated standardized testing as a tool of equity. Ultimately, DeVos’ reign at the Department of Education will not have changed the testing regime between the Obama and Biden administrations.