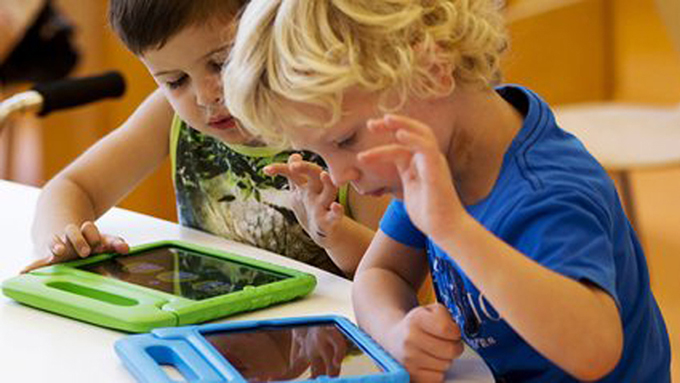 Young children learn through play. That’s why it’s the basis for early education in the UK, the US, Canada, Australia and many other countries around the world.

But with more and more young children now spending a lot of time in front of screens, a big question for many parents is whether time spent on touchscreens is good or bad for a child’s play and development.

Data shows British three- and four-year-olds spend around four hours a day on screen time – including at least one hour on games. And one worry is that screen time leads to poor outcomes for children.

But that said, some research shows touchscreens have direct benefits for play itself. A studythat followed a group of six preschoolers in their homes – covering a total of 17 hours of video footage – found the children showed 15 different types of play when interacting with touchscreen apps. They communicated, explored, and imagined, among other types of play. This suggests using touchscreen apps is play itself.

The children in the study also used apps as the basis for traditional play – for instance, by acting out the Netflix children’s series Paw Patrol in the real world. Research has also shown how apps can benefit preschoolers with Autism Spectrum Disorder. A study following four children found after playing with an app that encouraged pretend play, three of these children increased how much they pretended to be characters when playing with actual toys. This suggests apps could be used to teach children how to play more generally

Experimental research also shows playing with apps can have positive benefits on learning. One study showed how a group of four- to six-year-olds played with the Tower of Hanoi task on a touchscreen app. This task involves figuring out how to move a stack of rings from one rod to another without ever putting a larger ring on a smaller ring. After children played the task on the touchscreen app, they were then able to solve the problem with a physical version of the task without any additional time needed. This shows how children can learn through play on a touchscreen app, and transfer that learning to the real world.

Another study found that when preschoolers were given maths and language apps they enjoyed engaging with, their scores on standardised maths and language tests improved. This shows that playing with engaging and fun apps can help children learn some of the fundamentals at school. Even two-year-olds can learn language through apps, with researchfinding young children learn new words through Skype, but not television.

It seems, then, the relationship between touchscreen apps and play is complex. On the one hand, perhaps playing with apps will displace traditional play, leading to lower levels of activity in young children. But on the other hand, based on the research to date, it seems playing with apps could actually encourage play and learning – provided the apps have appropriate content for this function.

That said, the research in this area is still limited, so our lab is now running studies to find out whether apps show benefits or limitations to children’s play. Anyone around the world with a one- to three-year-old can participate in our longitudinal online survey. And it is hoped that by collecting this data over time, we can not only see if there is a relationship between touchscreens and play, but we can also find out if touchscreen use predicts children’s play long term.

We are also running lab studies in Bristol, England, to see whether playing with touchscreen apps makes two- and three-year-olds more or less likely to play later on – and whether children can learn to play from apps. Parents can find more information and sign up here.

So, for any parents out there who are wondering how to handle screen time with their young children, based on the current research, I would say choose app content that looks like it will help your child play or learn, but be wary of letting your children play with apps for too long, particularly near bed time.

Author Bio: Elena Hoicka is a Senior Lecturer in Developmental Psychology at the University of Bristol