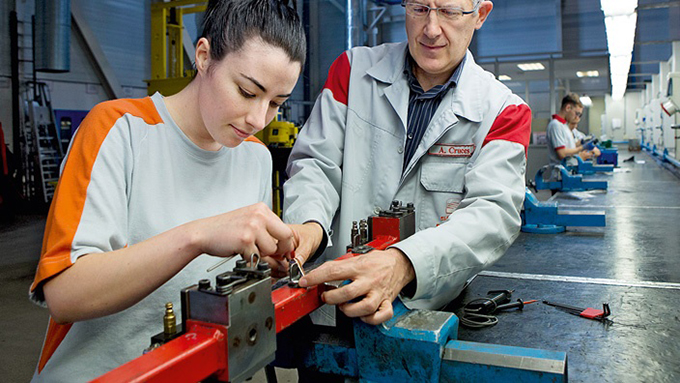 It really is amazing how whatever Trump says is twisted by the media. I apologize for piling on here by doing some twisting as well in the title, though I’ll at least concede he has the right of it. The article I’ll be quoting from gives no such quarter, presenting only those who disagree, and “accidentally” forgetting to indicate why Trump might well have a point:

Both my title and the article’s are a little misleading. The article clarifies quickly enough:

President Trump loves vocational training. Community colleges? Not so much.

There’s a big misconception by the public, which lumps vocational training and community colleges together. Doubtless this is due to the deliberate misleading by our leaders in higher ed.

Vocational training is worthy enough—training people for actual jobs by giving them actual skills. Schools specializing in this exist, but quite commonly community colleges offer vocational training as a sideshow to the pseudo-academics. Trump is right to distinguish between the two, because these schools often obfuscate what they’re doing so that most can’t tell the difference.

It’s very common for these schools to wheel out that one success story from the vocational part of the school, then neglect to mention that the vast majority of what goes on on campus has nothing to do with vocational training. In my own blog, I’ve highlighted many schools where 90% of the academic coursework is 9th grade (or so) material, sucking up taxpayer money for “college” material which is nothing of the sort and, more importantly, isn’t training the students for anything at all, much less a profitable occupation.

Let me state clearly: 90% of community college isn’t college. This percentage comes up every time I look at a school’s course offerings. The Poo-Bah will point out, correctly, that their “electrician certification program” produces ten graduates a year, he’ll neglect to mention the thousand or more students taking “Elementary Math” courses with content literally no different than what’s going on in the primary school down the road (and I do mean literally, because I’ve taught the course and compared with a friend teaching in that primary school).

Because of this fraud, we have weird quirks, where the most common college grade is an A, and yet schools’ on-time graduation rates are abysmal, with 0.6% (i.e., close to 1 student in 200) considered pretty decent.

This contradiction exists not because students are bad, mind you…it’s because the business model is fraud. They’re not students, they’re not there to graduate…they are there for the checks, and the people running the schools know it.

Just because there is some legitimate jobs training occurring on campus doesn’t change this simple fact.

But back to the article, which quotes Trump:

“But he’ll never be a student, nor did he want that kind of learning, that kind of whatever you want to call it,” Trump said. “So we need vocational schools. Now, they call them, a lot of times, community colleges. I don’t think it’s an accurate definition.”

Again, this is correct. There’s a big push for community colleges to change their name and call themselves universities. They’re not doing this because of their vocational programs. They’re doing it because the big, easy money is in “academic” programs. Let me explain way.
See, vocational training is expensive. You need to hire people that really know what they’re doing, and you’ll have to pay them more than what they could make with those useful job skills, to put up with collegiate working conditions. You’ll also often have to shell out real money for actual training tools—you’re not teaching electricians without an electrical shop, for example. Finally, the graduates of a vocational program have to have actual skills. Classes must be kept small so that students don’t fall through the cracks, and the instructor can see with his own eyes he’s passing people with legitimate skills. You can’t graduate fake electricians without the local community realizing it, very quickly…and that would be a problem for the school.

On the other hand, academic programs have a HYUGE (to use Trump’s phonetics) profit margin. Hiring a gender studies teacher is cheap, very cheap, because that’s just not a skill which has any market value (assuming gender studies is a skill). It takes no money for instructional materials, relatively speaking: just a projector so that the instructor can run the content-free PowerPoint slideshows. Class sizes can be gigantic, because nobody cares if a student gets through the course without learning anything. You can totally graduate fake Gender Studies majors because, again, nobody cares if the graduate is any good at it.

So our community colleges turn away from the hard and noble mission of job training, and go for the low hanging fruit of bogus academics. I doubt Trump knows the precise details I’ve outlined above (and the statistics I cite are all publicly available)…but he’s still right, even if it’s coincidental.

“I would welcome an opportunity to speak with the president about the wealth and breadth of programs and services our 1,200 community colleges provide annually to millions of individuals,” J. Noah Brown, the president and CEO of the Association of Community College Trustees, said in a statement Thursday.

Hey, CEO Brown? The statistics are publicly available because you collect them. These schools are sucking in Federal money, so Federal strings are attached, which means the schools collect and publish the data.

I’m sure CEO Brown will ignore what he knows to be true, and instead point at the little vocational programs that indeed represent the top of what community colleges offer, hoping Trump never learns of the huge mountain of rubbish hiding under those programs.

Ivanka Trump said the administration was focused on expanding alternatives to four-year degrees, including apprenticeships.

Yes, do that, please…I humbly ask the gentle reader to look at the want ads of the paper and see how much demand there is for electricians, mechanics, computer repairmen, and other people with skills, and compare that to the demand for gender studies, even though the latter course is now mandatory on campuses (I could address at this point how gender studies isn’t even academic, and explain the immense fraud of accreditation which allows this to happen, but I don’t want to digress too much here). Genders Studies is mandatory, so why not make computer repair and other important life skills mandatory?

Seriously, right now our community college graduates graduate with the knowledge of 45 genders and how everything is racist, because courses on those topics are mandatory. Would our community colleges be held in such low esteem if, instead, they had mandatory coursework on computer repair and car repair mandatory instead? If you can make non-academic coursework like gender studies mandatory, then, yes, you could make car repair courses mandatory as well. The gentle reader should consider carefully why the latter courses are mandatory, to see I have the right of things here.

The article then goes on to trash Trump regarding his support on campus among the students, assuring us that the polls say only a small percentage of students are Republican anyway or even like Trump . I won’t waste time on this aspect of the article, beyond reminding the gentle reader how well those polls predicted Trump’s support in the last election.

For the most part, the comments section dogpile on Trump (the site I’m quoting from is read mostly by faculty, who are indeed primarily Left-leaning), although one commentor points out, much as I have, the statistics regarding community colleges are abysmal:

David Curts • a day ago
Community colleges would be banned if they were private with their ridiculous outcomes, usually ranging around 8% graduation rates, only a little over 30% transfer rate, and 0% employment rates. Any other form of education including kindergarten would have been banned years ago if they consistently had such poor outcomes. It just shows how government protects its own by allowing public institutions to thrive when they perform so poorly.

If home owners knew that they directly pay for these terribly performing schools they’d be livid.

The above person is disregarded, but those stats, I again point out, are public knowledge (although I suspect the 0% employment rate is a typo). And, yes, any public school with outcomes like these would be a disgrace, even though it’s considered typical community college “success.”