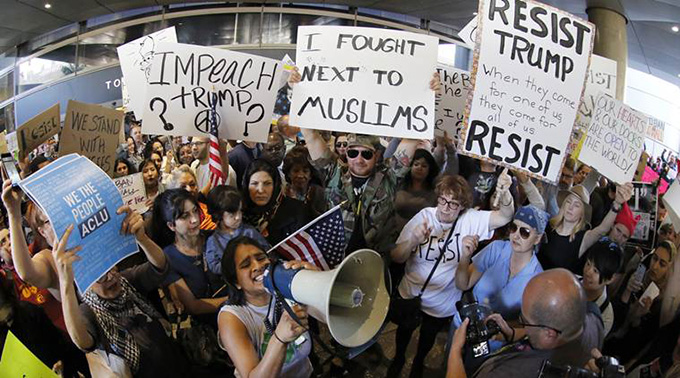 Forty-eight prominent US university presidents have written to Donald Trump urging him to rescind his controversial executive order, introduced on 27 January, which bars immigrants and non-immigrant visitors from seven Muslim-majority countries from entering the US.

Since the order was signed, US universities and universities around the world have condemned Mr Trump, describing the travel ban as “hateful”, “misguided” and “harmful”.

The letter, and details of all signatories, are reproduced in full below.

We write as presidents of leading American colleges and universities to urge you to rectify or rescind the recent executive order closing our country’s borders to immigrants and others from seven majority-Muslim countries and to refugees from throughout the world. If left in place, the order threatens both American higher education and the defining principles of our country.

The order specifically prevents talented, law-abiding students and scholars from the affected regions from reaching our campuses. American higher education has benefited tremendously from this country’s long history of embracing immigrants from around the world. Their innovations and scholarship have enhanced American learning, added to our prosperity, and enriched our culture. Many who have returned to their own countries have taken with them the values that are the lifeblood of our democracy. America’s educational, scientific, economic, and artistic leadership depends upon our continued ability to attract the extraordinary people who for many generations have come to this country in search of freedom and a better life.

This action unfairly targets seven predominantly Muslim countries in a manner inconsistent with America’s best principles and greatest traditions. We welcome outstanding Muslim students and scholars from the United States and abroad, including the many who come from the seven affected countries. Their vibrant contributions to our institutions and our country exemplify the value of the religious diversity that has been a hallmark of American freedom since this country’s founding. The American dream depends on continued fidelity to that value.

We recognize and respect the need to protect America’s security. The vetting procedures already in place are rigorous. Improvements to them should be based on evidence, calibrated to real risks, and consistent with constitutional principle.

Throughout its history America has been a land of opportunity and a beacon of freedom in the world. It has attracted talented people to our shores and inspired people around the globe. This executive order is dimming the lamp of liberty and staining the country’s reputation. We respectfully urge you to rectify the damage done by this order.