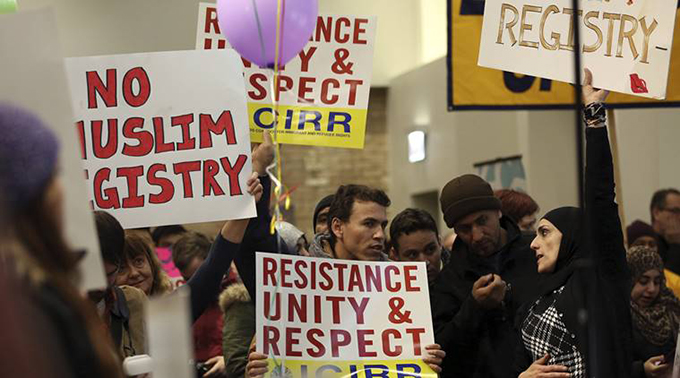 International enrolments at colleges and universities have been a major boost to the US economy in recent years, and have been crucial to ensuring the financial stability of many higher education institutions.

According to international education trade association Nafsa, international students also contributed $36.9 billion in economic activity in the US in 2016-17, supporting more than 450,000 jobs.

The number of international students, however, started to flatten in 2016. And in many states it is on the decline.

Moreover, the enrolment data in 2016-2017 support the notion that the current administration’s proposed travel ban and the rhetoric behind it are contributing to the downward trend. A preliminary survey of 500 colleges and universities by the Institute of International Education estimated an average 7 per cent decline in fall 2017, with nearly half the campuses reporting declines. Another survey by the American Association of Collegiate Registrars and Admissions Officers shows that international student numbers from some countries in the Middle East were down by almost 40 per cent last year. In particular, there have been large decreases in international students at many schools in the Midwest.

It is only recently, however, that our nation has focused on these dual negative trends in both domestic and international enrolments in higher education.

US colleges and universities are facing increasing competition from other English-speaking universities in the UK, Canada and Australia. In many cases their tuition costs are lower and the quality of foreign universities has improved. For example, the Times Higher Education World University Ranking for 2018 shows the University of Oxford in the top spot, with Cambridge ranked second. European institutions now occupy three of the top 10 spots and half the top 200 places in these rankings.

The current administration’s policies on immigration (particularly when it comes to approval of visas) have made it more challenging to be an international student – or prospective international student – at educational institutions across our nation. And future enforcement measures that may follow, as well as the anti-immigrant rhetoric in Washington DC in general, have created a climate of fear. Thus, this political uncertainly coupled with the increased competition abroad is likely to further reduce international demand for US education.

This is even more problematic given the fact that more than half of the foreign-born founders of US technology companies originally came to the US to study engineering and computer science. Foreign nationals already account for more than half of all US doctoral degrees. This additional “bonus” has not been factored into our nation’s political dialogue and the potential future loss to our economy.

California continues to be the most popular state for international students because of its excellent universities, great weather and geographic attractions. The state has also become the epicentre of creativity for the entertainment, media, technology and fashion industries.

Apart from the financial benefits, gender and ethnic diversity provides a fundamental benefit to a university education in the US, and the social impact of international students has been invaluable in this regard. The culture of college campuses has been strengthened by their diversity of opinion and innovative spirit.

It is critically important to provide a welcoming and supportive campus climate for these students who may have travelled – far less lived – abroad for the first time.