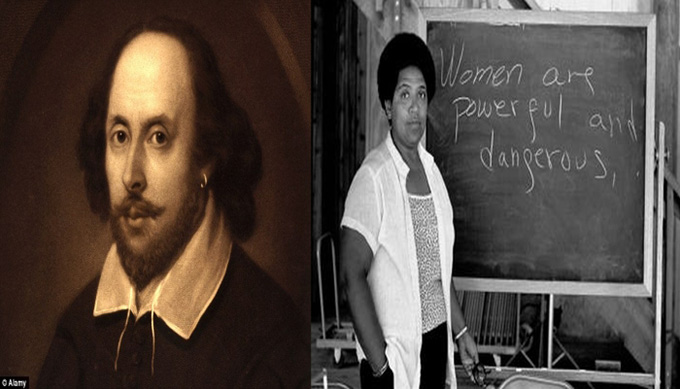 The dementation of higher education is in real time. From one eyeblink to the next, it seems one more thing happens to debase higher education. So we have Shakespeare being taken down, and a new author, Lorde, in his place. Before moving on to the latest slip into the abyss, I reckon I’d best answer the question that’s on most reader’s minds right now: “Who is Lorde?”

I grant summarizing one’s life in a sentence is no easy task, but one of these things is not like the other here. It’s easy to see that being a writer, feminist, womanist (for those not in the know, a “womanist” is basically a feminist that specializes in black women), and civil rights activist can all be noble things, but why is “lesbian” even remotely on the same level as these other activities? I guess I shouldn’t pass judgement, but I hope when my life is summarized, what I’ve done, or not done, with my genitals merits no mention at all. More accurately, I hope to have done so many good things that genital-related activity has no chance of making into that one sentence summary. Whoever Lorde was, her memory is demeaned by this description.

Anyway, a weird thing happened at the University of Pennsylvania:

The blackest thing ever happened on the campus of the University of Pennsylvania: A group of students recently removed a picture of William Shakespeare and replaced it with one of Audre Lorde.

This really strikes me as an outrage. I’m not denigrating Lorde’s accomplishments here. Heck, I can’t denigrate her accomplishments, because I don’t know them. I suspect the vast majority of my readers are unfamiliar with her work, hence my need to mention what Wikipedia had to say.

I remember as a child being told how degenerate the USSR was, how they quickly changed the city name of St. Petersburg to Leningrad, abandoning their history by dictatorial fiat. With the breaking of the iron grip of the USSR, the city voted to revert back to St. Petersburg, generations later.

I know the gray in my hair gives me a powerful reluctance and perhaps even a loathing of change but I don’t think my irritation here is simply grumpiness on my part.

For example, I’ll consider changing everything with regard to my major field of study. My area of specialization is statistics, and I’m quite aware that using a statistics as a method for making decisions is about one step past cracking open a goat and studying its entrails. The only reason we use statistics like this is because we don’t have anything better. Despite my resistance to change, once we have something better, I’ll happily support the abandoning of statistics as a means for decision making.

The change from Shakespeare to Lorde, on the other hand, I find myself resisting on more than just principle.

Is Lorde really better than Shakespeare, or is this simply yet another Marxist-type fiat where we’re abandoning history in favor of some fad. Shakespeare clearly has major influence on our civilization today, the English language is loaded with idiom that would not exist without him. I don’t suppose Shakespeare will be forever (insofar as nothing is), but it just seems like his replacement should be someone most people have heard of.

Removing The Bard and replacing him with a famous Lesbian (I’m going with the flow here) was a student initiated action. The department, the scholars, could use this as a teachable moment, explaining why Shakespeare was placed in a prominent position, and could concede that Lorde’s picture should be given a position as well, commensurate with her achievements.

No chance of that:

Esty [department Chair], who declined to be interviewed, said in an email to the Daily Pennsylvanian, “Students removed the Shakespeare portrait and delivered it to my office as a way of affirming their commitment to a more inclusive mission for the English department.”
Esty added that the image of Lorde will remain until the department reaches a decision about what to do with the space.
I know, one must pick battles to fight, but I sure don’t like the precedent here. Should students really be the ones to decide who, and more importantly, whose work, should form the basis of an education? Shouldn’t someone at the department have enough wisdom to say “Hey, let’s just have both pictures up?” Again, I find myself worrying about this. Why must the “old” things be utterly destroyed, to be replaced by the new fad? Is not even the possibility of sharing a spotlight on the table?

I’ve heard it said that our campuses are under the control of insane Marxists (at the risk of repeating myself), and I can’t help but see a parallel between the Shakespeare/Lorde debacle and St. Petersburg/Leningrad. Am I truly alone in seeing how this will play out? Don’t English faculty members know a bit of history?

I seem to be in a small minority here, as the comments section of the article are far more supportive of this action than not.

The department caved to student demand here, of course, because they feel that’s the best way to get more students. I do wish they would consider the bigger picture. What’s going to happen when graduates from this English department are able to spout how lesbians are wonderful, but know nothing of literature? Isn’t that going to be a bit of a problem?

Just one more reason why my daughter, who scored perfect on the English portion of her ACT, will not be going to U Penn.

–from a different comments section.

As always, the student loan scam is a big part of what happened here. In the olden days, students went off to college, but were supported by the parents. The parents held great interest in seeing to it that the students were getting a good education. The university was interested in making sure it was offering a good education, and so represented more conservative values, to satisfy those parents. You didn’t just toss works with centuries of established value behind them for whatever current fad was popular with the kids.

But now it’s the kids who check the box qualifying them for student loans, and so it’s the kids that our universities now must satisfy. The kids don’t want Shakespeare, they want someone with the right skin color, who uses her genitals a certain way. This is hardly the first time I’ve covered this sort of inanity in my blog, and as long as the student loan scam exists, it won’t be the last.