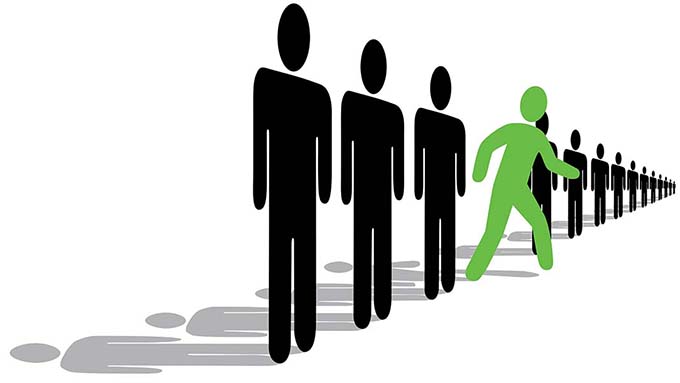 Universities across the world have been congratulating themselves on their overnight switch to online teaching and learning as the pandemic bit. Many have cited it as evidence that universities can be a lot more agile than people give them credit for.

Yet has the digital switchover really been as successful or “overnight” as university leaders would have us believe?

Student and staff satisfaction has differed wildly from institution to institution, but many reports show an overall decline in satisfaction with teaching and learning across the sector. And, in the UK, many students have felt short-changed and have demanded fee reductions.

So what went wrong? Of course, this was an unprecedented situation and thus mistakes and missteps were bound to happen, especially given the lack of clarity from the government. However, the modes of digital adoption taken by the majority of higher education institutions in the years preceding the pandemic may well have made the situation a whole lot more difficult.

Throughout the first two decades of the 21st century, there was a huge amount of investment in modernising the UK’s higher education sector. National initiatives driven by the government and agencies such as Jisc, the Quality Assurance Agency, and Advance HE and its forerunners have long pushed for digital transformation. Of course, a wholesale move to online teaching was never the goal, and some notable changes were implemented, such as the now almost ubiquitous use of virtual learning environments. Yet, for the most part, the learning from these programmes was isolated in small projects and pilots. All those millions of pounds and thousands of papers, reports and policy briefings counted for little when it came to providing remote learning through the unfolding crisis.

Why? Because when it came to effective digital pedagogy, universities left it to the early adopters.

The traditional model of technological adoption, developed by the American sociologist Everett Rogers, suggests that following a period of innovation, early adopters – those with a keen interest in technology and a desire to experiment – will pick up new ideas and technologies and start to play with them. Then, as technologies become proven, most of the population follow in adopting them, albeit at different rates.

Many universities assumed that a similar dynamic would play out regarding digital pedagogy. Institutions placed the exciting work of early adopters on a pedestal and naively expected a trickle-down effect whereby even the “laggards” would ultimately follow in their footsteps.

However, the jump from early adoption to a more wholesale use of technology is a large one at the best of times. In the technology world, it is often referred to as a chasm (see graphic below). And within higher education this chasm is widened further by both the high stakes of getting things wrong – the negative consequences for students’ education – and what we might call digital imposter syndrome.

Like standard impostor syndrome, this phenomenon is characterised by often unfounded feelings of self-doubt, inadequacy or lack of knowledge. During the pandemic, it was greatly enhanced for many academics by the media, which pushed a relentlessly negative narrative around students’ satisfaction with online university teaching – as well as by a lack of access to support due to working from home. However, it might have been less pronounced if universities had adopted a more inclusive approach to digital development from the start. Constant talk of innovation and demonstration of highly skilled digital teaching by early adopters can keep technology at arm’s length from the rest of the university, making it feel too avant-garde and difficult to learn.

As institutions across the country are looking to what they might learn from the pandemic, and especially in relation to the role that digital might play in the future, it is going to be important to examine how institutional transformation takes place, and where that is led from. It is also important to note that while the academic community has for the most part risen to the challenge of teaching online, this is not equivalent to crossing the chasm to confidence, and desire, in using digital in future practice. 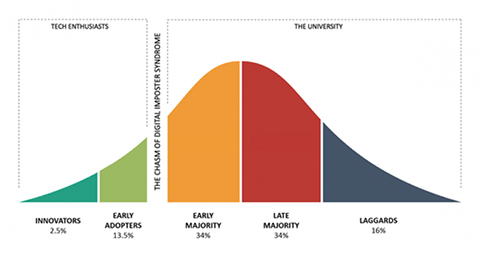 Instead of relying on individual innovators and early adopters to bring people along, we need a whole-institution approach that supports people to try technologies in ways that will not have a detrimental effect on students or cause humiliation if they go wrong. Within this, we need to allow space for department-level experimentation, growth and communities of practice. We need to build relationships that do more than follow up on experimental moments but also harness mentoring and collaborative working to explore what might work better next time – pedagogically as well as technologically (even if the answer is to go back to an analogue approach).

Pointing to early adopters and saying “be more like them” doesn’t work for most people. If universities are to effectively build on what has been learned during the past year, they need to approach it as collectives of equals. They need to work from a common desire to improve students’ education, allowing themselves the space to get things wrong and to learn the lessons together, as a community. Heroes or ambassadors will only distract from that common purpose.

Author Bio: Doug Specht is a Senior Lecturer and Director of Teaching, Learning and Quality Assurance at the University of Westminster’s School of Media and Communication.