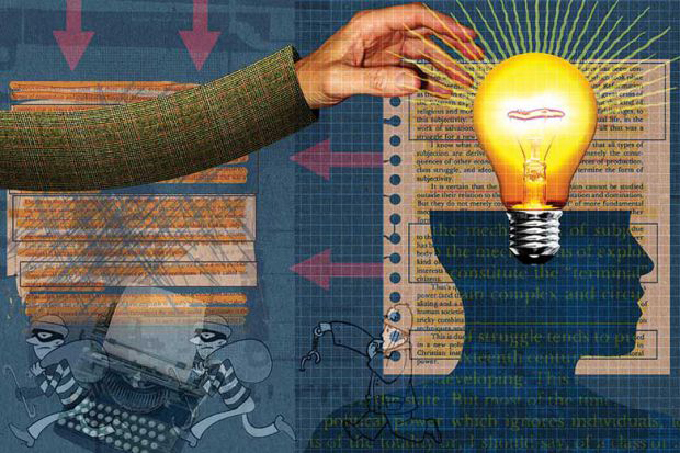 “Antonio Vivaldi did not write 600 concerti, but the same concerto 600 times.”

This witticism, which has been ascribed – possibly apocryphally – to the 20th-century Italian composer Luigi Dallapicolla, could also be applied, with a few factual tweaks, to Vivaldi’s contemporary, Johann Sebastian Bach.

Bach not only reused his own material through the process of parody but also repurposed the music of others – including Vivaldi’s. But that does nothing to prevent his being revered as one of the greatest composers.

Comedians are not expected to write all their own raw material either, and their writers are not laughed out of town when they repurpose jokes that are already out there. Nor are politicians in the habit of writing their own speeches, but nobody complains when they fail to credit their actual authors.

And yet in academic circles, all these examples would count as plagiarism. Indeed, politicians in some countries, such as Germany and Spain, are regularly condemned for having allegedly committed plagiarism in their PhD theses.

At first glance, these differing standards may seem odd, suggesting that perhaps academia’s standards of originality are too high. But if any walk of life has its standards right, it is academia. It is their inconsistent implementation that is the problem.

In academia, people are judged primarily on the basis of their output, which is most frequently in written form. It is, therefore, imperative that credit for the generation of that product be apportioned appropriately.

The US Federal Research Misconduct Policy defines plagiarism as “the appropriation of another’s ideas, processes, results, or words without giving appropriate credit”. So it is a violation to copy or to use a slightly modified version of another’s words without attribution – where attribution means not only citing the source of the text but also explicitly (by means of quotation marks or offsetting) indicating exactly which words are being reproduced. After all, academics could produce a much greater volume of writing if they didn’t have to actually craft their own text.

In many forms of publication, however, direct quotation is not permitted. In fact, in those formats there is normally no reason to quote directly. Paraphrasing forces authors to synthesise the material that they are citing into a structure that is directly relevant to their readers.

An example is scientific review articles. These do not present original research, but rather are supposed to present an original critique of the published literature. In practice, however, there are a growing number of examples of review articles that are little more than glorified bibliographies, in which quotations from the abstracts of the reviewed papers are strung together without providing readers with any indication that the words they are reading are not those of the review’s authors. Such text recycling is straightforward plagiarism.

A more serious kind of academic plagiarism is the abuse of peer review. Reviewers are provided with privileged information on the condition that they will not share it with others and will not use it to advance their own scholarly activities. But readers of published articles often recognise duplicated texts, or may have strong reason to suspect that results described have been reproduced or materially influenced by a manuscript of their own that the author was asked to review.

Such behaviour is unfair and promotes the wrong concept of the route to academic success. Yet while students are held to account for plagiarism, academics rarely are. One major reason is that journal editors, the first line of defence in the battle against plagiarism, are highly reluctant to penalise plagiarism. Sometimes they excuse it on the basis of some numerical analysis provided by plagiarism software. But the databases used by the software are incomplete, and the programs can be deceived by small changes in spelling or syntax.

Moreover, the standard outputs of some software reports often define plagiarism solely in terms of substantial textual overlap with just one other text. It is perverse for an editor to accede to this definition and to fall back on the data from such programs even when provided with direct evidence of multiple identical or nearly identical sentences or even paragraphs from two or more texts.

Another major issue is that people often confuse “fair use” provisions with rules on plagiarism. You can infringe copyright without plagiarising, by quoting too extensively. Conversely, you can be within your “fair use” rights and still commit plagiarism if you don’t acknowledge the source of the text you are reproducing.

As for self-plagiarism, journals explicitly state that authors must not recycle their own writing – and certainly not without proper citation. And with all due respect to Bach, it is not fair to those who follow the rules and write novel material each time for others to be able to publish a mosaic of their past writings as a new article.

The current incentive system rewards those who publish often. If there is no penalty for regurgitating previously published material, then we have a formula for undermining originality and creativity and honouring laziness and intellectual theft. And that can’t be music to any fair-minded person’s ears.

Author Bio: David A. Sanders is an associate professor in the department of biological sciences at Purdue University.