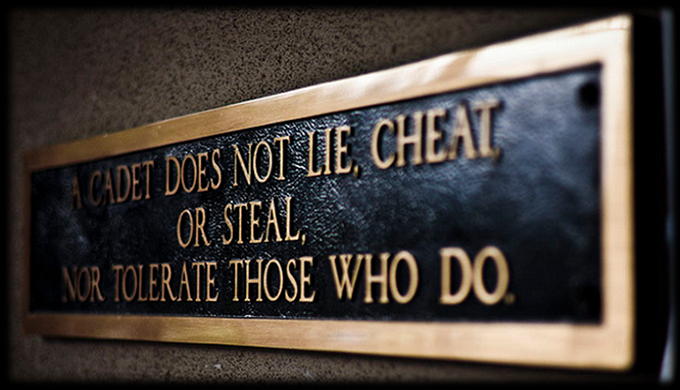 I’m looking over an open letter from a faculty who has retired from West Point, detailing how the school is corrupt on every level now.

One thing he’s pointed out is how the Honor Code at the school is, well, no longer being honored. Why?

To make matters worse, the senior leadership at West Point actively discourages staff and faculty from reporting honor violations. l was unfortunate enough to experience this first hand during my first tour on the faculty, when the Commandant of Cadets called my office phone and proceeded to berate me in the most vulgar and obscene language for over ten minutes because I had reported a cadet who lied to me…

When your bosses punish you for having integrity, for trying to follow the rules you are told you need to follow, it’s pretty demoralizing. In higher ed, you can lose your job or get a pay cut for daring to catch a cheating student. Faculty figure out early on that trying to enforce any standard at all is detrimental to your career. We all get that memo at some point.

Apparently, at West Point you don’t get a memo telling you to have no integrity, you get a 10 minute chewing out by a Commandant. I concede this is a little different, but the end result is the same: your boss’ job, as near as any faculty can tell, is to eliminate all standards in pursuit of the goal, whether it be butts-in-seats or producing graduates.

Just recently a cadet openly and obviously plagiarized his History research paper, and his civilian professor reported it. The evidence was overwhelming-there was not the slightest question of his guilt, yet the cadet was not found. The professor, and indeed all the faculty who knew of the case, were completely demoralized. This is the new norm for the cadet honor system. In fact, there is now an addition to the honor system (the Willful Admission Process) which essentially guarantees that if a cadet admits a violation, then separation is not even a possibility.

Much as I’ve identified in higher ed…admin won’t get rid of the cheaters. Other students catch up to this, honest, and thus does cheating spread throughout the campus.

Academic standards are also nonexistent. I believe this trend started approximately ten years ago, and it has continued to get worse. West Point has stated standards for academic expectations and performance, but they are ignored. Cadets routinely fail multiple classes and they are not separated at the end-of-semester Academic Boards. Their professors recommend “Definitely Separate,” but those recommendations are totally disregarded

There really was a time when failing students were removed from campus, but that time has long since passed in most of higher ed, and the professor here claims it passed around 10 years ago at West Point.
I’m not a jerk, I want people to succeed. In higher education, trapping people in college for 6 to 10 years while racking up insane amounts of debt only to get a worthless degree is not helping them, it is, in fact, hurting them far worse than if they were simply allowed to fail, leaving college to pursue a goal they’re more willing to work towards.

At West Point, keeping students who clearly have no business leading our military might not lead to massive student debt…but it’s still evil. Do we really want the guys operating our multi-million dollar weapons and nuclear bombs to be people who had to take the “press the red button to kill millions of people” course half a dozen times before passing?

I exaggerate, but it’s pure insanity that our West Point graduates are now people that need many attempts to “get it right.” In the military, you can’t count on getting second/third/fourth/fifth/sixth/seventh chances, but that’s what we have now.

…If a cadet fails a course, the instructor is blamed, so instructors are incentivized to pass everyone…

–blamed by WHO? Have I ever found a retired faculty not reporting this?

And, I assure the gentle reader, the reason academic standards are nonexistent at West Point are the same as for why they are nonexistent on many campuses. The leadership tells faculty over and over again to reduce standards…or else. We get the message, or we’re replaced with someone who does get the message. I repeat the key quote here:

…If a cadet fails a course, the instructor is blamed, so instructors are incentivized to pass everyone.
It’s not complicated, and either way, standards are annihilated.

The plebe American History course has been revamped to focus completely on race and on the narrative that America is founded solely on a history of racial oppression. Cadets derisively call it the “I Hate America Course.”

It’s very clear that Leftism has infested West Point, and that this infestation is, as always, killing the host. It’s a pretty huge flag that a course is a joke when the students are pointing and laughing at it. Too bad the leadership doesn’t care that the school is a joke.

I could not believe I was even looking at a West Point cadet. However, if a staff or faculty member attempts to correct the cadet in question, that staff/faculty member is sure to be reprimanded for “harassing cadets.”

The above is in reference to a slouching, t-shirt-wearing tattoo’ed cadet loitering on campus. And the faculty there get into trouble for trying to maintain some decorum.

Meanwhile, faculty on non-military campuses are constantly terrified of performing micro-aggressions against students. We really need to ask questions about what happened to higher ed, so that when this system collapses, we’ll know what not to do when we rebuild it.

That brings me to another point: cadets’ versions of stories are always valued more highly by senior leaders than those of commissioned officers on the staff and faculty. It is as if West Point’s senior leaders believe their job is to “protect” cadets from the staff and faculty at all costs. This might explain why the faculty’s recommendations are ignored at the Academic Boards, why honor violations are ignored (and commissioned officers are verbally abused for bringing them to light), and why cadets always “win” when it comes to conduct and disciplinary issues.

The above I believe hints at the core problem: educators no longer have any control over education. If I accuse a student of something, I can accept the burden is on me to justify and provide evidence for the accusation. That’s reasonable.

What is unreasonable is our campuses are filled with administrators, and they’re all there to protect the student, and they all have power over me. If I just had to convince another faculty of my reasons for removing a student, well, I’d be dealing with someone who actually knows something about education, and it would just be one person who cares about education making the decision…it would be a fair enough system, but that’s not how it works.

Instead, I have to convince an assistant Dean, a Dean, a Vice Provost, a Provost, a Chancellor, and probably three or four other bureaucrats who’ve never taught a class in their life, quite possibly have no education, and whose job it is to protect the student from faculty.

It seems that the Academy’s senior leaders are intimidated by cadets.

Yeah, no kidding. Admin are intimidated by students on many campuses, I even use the same word, “intimidated,” to describe the relationship…we need to ask questions about how this happened.

I come to one part of the letter where I must disagree:

Conduct and behavior that would never be tolerated at a civilian university is common among cadets, and it is supported and defended by the Academy’s senior leaders in an apparent and misguided effort to attract more applicants…

The retired professor is very, very, wrong here, but it’s simple ignorance on his part. He simply is unaware of how bad things are at a “civilian university.” I’ve documented quite a bit of it in my blog, especially misguided efforts to attract ever more students (I’ve used the phrase “growth uber alles” to describe the behavior for a reason).

The letter goes on for quite a bit, but the key takeaway is the hopelessness, which, sadly, is quite justified.

All I can do at this testimony (which rings so perfectly true to what my eyeballs have seen, many times) is shake my head, and be saddened that, indeed, West Point is corrupted.