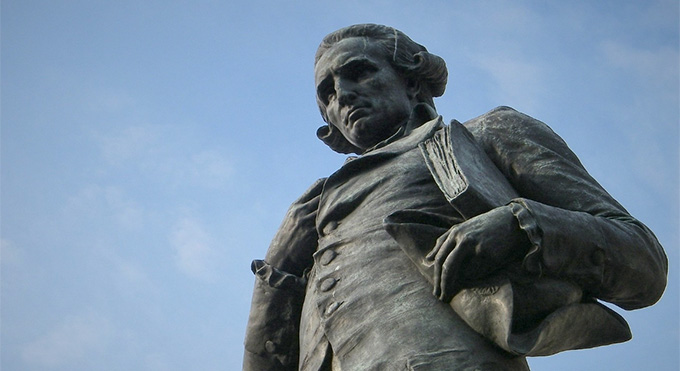 When one reads a great philosopher, even if he has been dead for more than two centuries, one has the strange feeling of reading one of our contemporaries, of hearing a voice so strong and so strong that it still speaks to us. This is the case when one examines the major texts that Nicolas de Condorcet (1743-1794) left us on the school and the teaching.

In the XVIII th  century, when paid little interest in the intellectual formation of girls, Enlightenment mathematician, politician during the French Revolution, was positioned precursor. In his Memoirs on Public Education (1791), he defends the idea that girls and boys should have access to the same instruction, because truth, universal in nature, is due to all.

Moreover, women will be able to exercise their rights serenely only if they too are invited to the table of knowledge, he explains in The Admission of Women to Freedom of the City , 1790). It’s not just about allowing girls to study the same programs as boys, but already, to create mixed classes:

“Since the instruction must be generally the same, the teaching must be common, and entrusted to the same master who can be chosen indifferently in one or the other sex” (“First Memoir”).

In advance of its time, Condorcet raises debates about the school that still animate our time, from the constitution of a base of fundamental knowledge to the question of school competition, through a guarantor of programs. Travel in an educational thought of a surprising modernity.

The revolutionary period saw the clash of the public education, whose emblematic figure is precisely Condorcet, and the advocates of a national education, represented in particular by Rabaut Saint-Etienne and Lepeletier de Saint-Fargeau . To instruct or to educate, these two orientations are posited as irreconcilable.

The instruction aims at transmitting knowledge and cultivating reason; education, it has the task of transmitting not only “truths of fact and calculation” but also “political, moral and religious opinions” (First memory).

Condorcet rejects the educational orientation because, if education liberates by the intrinsic virtues of knowledge, education, on the other hand, is model and domestic. Education is also a parental prerogative. And to arrogate this, not only the school is misguided in its mission, but it also undermines the legitimate rights of parents. To the family the duty to educate, to school that of educating and enlightening.

It is therefore necessary to “make the popular reason” while ensuring that differences in knowledge do not lead to relations of subordination. The task of the school is then to dispense basic knowledge , a true common foundation of skills before the time.

For this knowledge, derived from the available scientific knowledge, must obey, as Catherine Kintzler ( Condorcet, Public Education and the Birth of the Citizen ) has shown, two original epistemological principles. A principle of sufficiency: their control guarantees intellectual autonomy.

“Primary schools teach what is necessary for each individual to lead himself and to enjoy the fullness of his rights” (Report on Public Education, 1792).

And a principle of openness: these knowledges open up on other, more elaborate knowledge, which enables the mind that has sufficient intellectual vivacity to reach the heights of knowledge.

The basic knowledge are not rudimentary knowledge that would have a practical value, they are also the first knowledge of knowledge. Knowledge organized in a progressive way, which makes it possible to reconcile a legal requirement – the free exercise of its rights – and a societal requirement – to have an elite worthy of the name.

Such is the tour de force of Condorcet: to reconcile legal equality between men and differentiated access to science. Elementary knowledge makes it possible to form a common reason while preserving the diversity of talents.

A competition to avoid

The school must then promote an emulation whose strength is the desire to be loved and recognized for its qualities. Emulation that turns its back on the permanent desire to always want to be the best:

The habit of wanting to be the first is a ridicule or a misfortune for the person to whom it is contracted, and a real calamity for those whom fate condemns to live with him. ( First memory ) »

The former resident of the Reims Jesuits denounces the pedagogy of his masters who have continued to cultivate rivalry and competition. In these , no study without classification, no learning without reward. Dispute, public exercise, award ceremony, creation of academies …

Condorcet joins on this point what Rousseau said in L’Emile  :

“It is very strange,” the Genevan philosopher was already sorry, “that since we have been involved in raising children, we have not imagined any other instrument to lead them except emulation, jealousy, envy. vanity, greed, vile fear, all the most dangerous passions […] and most likely to corrupt the soul. “(” Emile or Education, “Book II).

The emulation that Condorcet praises, the fruit of a school that knows how to welcome everyone so that we can learn together, owes nothing to this arrogant pride that drives us to want to be above the others. It only aims at one thing: to earn the esteem and the trust of its peers. The school always thinks the next day and

“Human life is not a struggle in which rivals vie for prizes; it is a journey that brothers make in common, and where each employing his strength, is rewarded by the sweets of reciprocal benevolence, by the enjoyment attached to the feeling of having deserved recognition or esteem “. (Condorcet, “First memory”)

Independence of the school

If the primary condition of any instruction is to teach only truths, then “the establishments which the public authorities devote to it must be as independent as possible of any political authority” ( Report on Public Education ) . In the April 1792 report, Condorcet proposes to found a national science and arts society whose mission would be to guarantee the scientific quality of programs and to write textbooks.

The only legitimate authority that the school is entitled to admit is the scientific authority. For by submitting to scholarly authority, the school finally submits only to itself, as a place of knowledge and science. The school must be protected from all forms of pressure (family, clerical, ideological …) so that it can deploy its project that is none other than the love of truth and Enlightenment.

If the school must transmit emancipatory knowledge, it must still be able to do so, that is to say in complete freedom. To be a place of instruction, preserved and independent as it is dedicated to the emancipation of all men, such is the definition that Condorcet could give to the school.