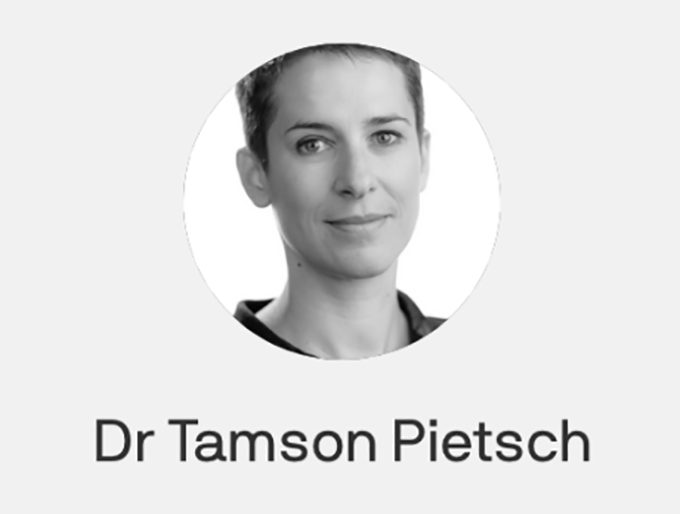 I’ve been thinking a lot lately about expertise and its history and the ways that academics like me deploy it to underpin our knowledge and authority claims.

This is my current bio, taken from my UTS website: 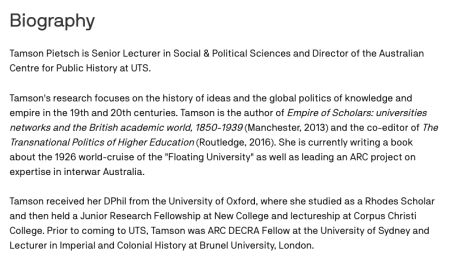 I send versions of this bio to conferences and academic journals and reproduce it in thousands of conversations. It follows a pretty defined formula, beginning with my name (often also given with pre-noms), my position in a hierarchy and my employing institution. It then proceeds to mobilise my publications in order to establish my authority and field of expertise, complete with the sanction of academic publishers and grant-making bodies. At the end come more references to credentialising institutions that stand as further markers of status and serve as evidence of my international formation and legibility.

It is a bio that is geared towards establishing my standing as a professional and as an expert, who is fluent in a language of specialised knowledge that is portable, authoritative and objective.

And this language does work. Since the early part of the twentieth century university credentialed expertise has extended its reach into more and more knowledge domains,  underpinning the technocratic forms of rule-making that have shaped our societies, political systems and economies. Today it continues to be my passport to speak in academic and professional contexts across the world.

When you look at it, my academic bio says very little about me. Although it obliquely speaks to some episodes in my life that were hugely important to me (my time at Oxford for example), it says little about where I come from and the forces and belongings that fashioned me. It does not reveal my values, my obligations or my commitments, and it speaks in only the most minimal terms about where I live, why I do what I do, and how that is connected to the community in which I make my home. The only thing to which it holds me accountable is the world of trans-local expertise and the institutions that retail in it.

Reading Bruno Latour’s recent book Down to Earth: Politics in the new Climate Regime* has mobilised me to try something quite different and unfamiliar. He ends his book by introducing himself and describing “where he would like to land”. In the process he turns on its head the usual formula for performing academic credentials to re-situate himself in a place and a set of values, hopes and solidarities.

So, following Latour, I’ve attempted to write a different kind of academic biography, one that locates me as a part of an historical process of formation (familial, settler colonial, religious), points to the ground I call home, foregrounds my commitments and my values, and understands my institutional location as the outcome of these commitments.

In short, it makes me political. But it also makes me a person who is much more than a brain on a stick.

It was, I confess, deeply uncomfortable to write, and probably it’s still a work in progress. Stripping away the apparatus of status built up over nearly twenty years (eek) of life in universities, made me feel vulnerable and exposed.

But I think that, really, is the point. In speaking about where I stand, I make myself available. And from there grows the possibility of relationships with both others and with places, and of common action. And goodness knows, that is what the world is going to need a lot more of as we find a way to live together in our common home.

Author Bio: Tamson Pietsch was born and grew up in Adelaide on the lands of the Kaurna people, as part of Australia’s German Lutheran community, and now makes her home in Sydney. She believes that the ways we make sense of who we are and how we got here helps to shape the societies we are striving to build. Tamson is committed to the roles that universities and other cultural institutions play as homes of this meaning-making. This commitment has been shaped by experiences and relationships made in academic and civic institutions in Adelaide, Melbourne, Oxford and London. It is a commitment that underpins Tamson’s work as an historian of higher education and ideas, and as Director of the Australian Centre for Public History at the University of Technology Sydney.