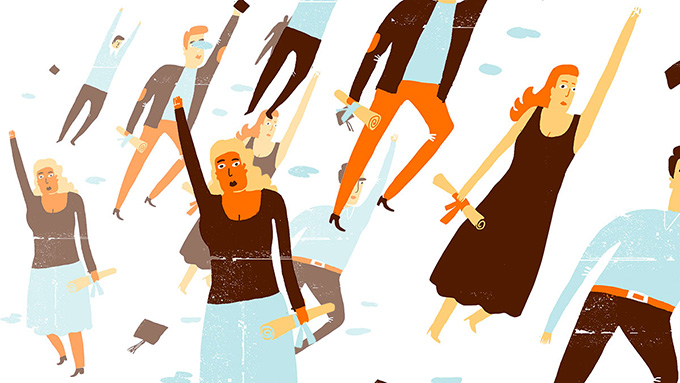 In France, several professions in direct contact with the coronavirus pandemic are highly feminized. On the front line in the face of the virus, in hospitals, nursing homes, patients’ homes, pharmacies, etc. you can find: nurses (87% of women, according to DARES ), nursing assistants s (91%), maintenance agents (70%), pharmacy assistants (89%) , pharmacists (73%) … Other professions, non-medical but everything also feminized, are also confronted daily with the virus: cashiers (79%) , teachers (67%), home helpers (97%) …

The differences in professional integration between women and men have been described for a long time, but they are highlighted in the situation we are currently experiencing. They take the name of “glass walls” or horizontal segregation and correspond to the concentration of women in certain sectors of activity.

They are therefore in the majority in the education, health and social action sectors (68.8% women), as well as in services to individuals (67.5%). Precisely the sectors where the stability of employment is the least and where the wages are the lowest.

They are also concentrated in fewer professional families than men. Thus, in France , 12 of the 87 professional families group together more than half of the jobs held by women, while men are distributed in a much more diversified manner within these families. The share of “mixed” jobs (ie jobs for which the proportion of each sex is between 40 and 60%) remains low: 16% according to the Economic, Social and Environmental Council .

This diversity increases with the diploma and is more important in the public sector. Among these mixed professions, we find, for example, administrative and financial executives, civil service executives, banking and insurance executives, commercial attachés, or executives and higher intellectual professions and, in connection with greater academic success for girls.

How to explain that this situation persists, despite numerous laws (for example, Roudy law, 1983; Génisson law, 2001; law on equal pay of 2006; law on substantive equality between women and men of 2014) and systems (defender of rights, high council for gender equality . dedicated to making it evolve?

For Maruani (2003) , the sex of the person who holds a particular type of job constitutes a lasting marker of the representation of the job. Because of this gendered division of labor, a categorization into “male occupation” and “female occupation” is constructed. According to Pierre Bourdieu (1998) , while the professions of men are considered as “real professions”, those of women are evaluated less favorably and are perceived as professions in which women can express their “natural” dispositions.

Thus, women often exercise professions whose content would be perceived as extending the activities and know-how acquired in the domestic sphere . For Vouillot (2014) , women are, according to this prism, seen as ideal candidates for jobs requiring patience and understanding, calm while men are supposed to match the jobs requiring physical strength, aggressiveness or authority.

According to this representation, if the professions exercised by the majority of women are perceived only as the reproduction of what they do in the personal sphere, if it is implicitly considered that they do not need specific skills to exercise these trades, this may have an impact on the recognition of their qualifications. This lesser recognition of their qualifications can lead to a lower valuation of the jobs they occupy and ultimately explain why wage differences persist, inherited from the professional classifications that were constructed previously.

Here we touch on the link that exists between social asymmetry (professional insertions, different salaries, etc.) and cognitive asymmetry  : information is not treated in the same way depending on whether it concerns a woman or a man; the representations we have of personality traits, qualities… of individuals are influenced by our stereotypes.

Stereotypes and how they work have long been studied by psychologists. The term was introduced by Walter Lippmann in 1922, to evoke images in our heads, simplified descriptive categories by which we seek to situate others or groups of individuals. Stereotypes are thus made up of a set of beliefs about the traits that are supposed to characterize members of a social group. They are socially shared because they are conveyed and maintained by the social environment. They influence our relationships with others and are likely to modify our judgments towards members of a social group. They would also have an ideological function of justifying or legitimizing the asymmetric status of groups in the social structure and are eventually integrated, assimilated by the very people who suffer the consequences.

Moreover, the content of stereotypes is based on two fundamental dimensions, relatively independent and called “Big Two” . In the model of Abele, Uchronski, Suitner and Wojeciszke , the first dimension takes the name of communality and the second of agentism.

Communality would be the tendency of a person to maintain his integration into a community, to establish intimate relationships with others, to put his individual needs in the background to the common needs and to take care of others.

Agentism would manifest itself through differentiation, control, self-affirmation. It would be the tendency of a person to be independent, autonomous, to control his environment, to assert, protect and extend the self. For these authors, the agentic qualities (for example, ambition, independence, domination) would be beneficial to the individual who possesses them, while the communal qualities (like, for example, politeness, honesty, kindness, kindness ) would be for people interacting with that individual.

Moreover, if we refer to the theory of social roles proposed by Eagly , the division of labor could be the fundamental cause of gender stereotypes. The more frequent participation in the paid labor force and the greater occupation of command roles have given rise to the commonly accepted idea that men possess agentic characteristics, as do women’s domestic responsibilities and the fact that they occupy positions of power. employee roles in the service of others have induced the idea that women hold communal characteristics. We are therefore in a vicious circle, in which stereotypes influence career choices, recruitments … and, in return, the image of a gendered labor market confirms and reinforces gender stereotypes.

Several avenues could be considered and could guide political action:

Will the current crisis and the highlighting of these essential, but long hidden, jobs make it possible to change this social dynamic? Or is it a transient effect? If the latest opinion polls have shown that almost all of the people questioned have a very positive image of nurses, will the gendered image of the profession be less so in a few months? Will the health Ségur and the planned salary enhancement induce greater diversity in the choice of orientation towards the health sectors? For the moment, it is too early to measure the effects, even if the current crisis seems to have strengthened the vocation of certain young people for these sectors

Author Bio: Sabine de Bosscher is a Lecturer in Occupational Psychology at the University of Lille