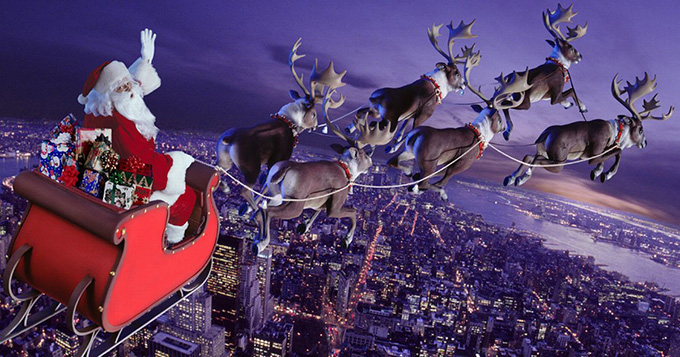 The end of the year holiday season has arrived, with all the myths that go with it, foremost of which is of course Santa Claus. It was around this time that children are told the story of an eternal man, who dwells at the North Pole, knows what every child wants all around the world, drives a sleigh pulled by flying reindeer and enter homes through the fireplace – a fireplace that most children do not!

Given the multiple absurdities and contradictions of this story, it is surprising that children, even very young, buy into it. However, research in my lab shows that 83% of 5 year olds think Santa is a real person. How is this explained?

An advantage of evolution?

At the base of this paradox is a fundamental question about the young child, considered as an intrinsically credulous being, as opposed to what one would define as a rational being.

In an essay published in 1995, famous author and scholar Richard Dawkins claimed that children are inclined to believe almost anything they are told. He even suggested that it would be an advantage gained during evolution.

He illustrated it very convincingly by taking the example of a young child living near a swamp infested with alligators. He argued that the skeptical child – who would critically assess his parents’ advice telling him not to go swimming in this swamp – is much less likely to survive than the one who recklessly follows his recommendations. his parents.

This way of seeing young children as gullible be is quite widely shared, including by the philosopher of the XVIII th  century Thomas Reid , and specialists in developmental psychology, which ensure that children are strongly inclined to trust that people tell them.

Not that different from adults?

Yet research in my lab shows that children are rational and thoughtful consumers of information . In fact, they use the same tools as adults to assess what to believe and what not to believe.

So what are these tools and how do we know that children have them? Let’s focus on three of them. The first is the attention paid to the context in which the information fits. The second is the tendency to evaluate new information against the prior knowledge available. The third is the ability to assess the expertise of other people.

Let us first look at what is contextual. Say you read an article about a new species of fish, which we’ll call “supernumeraries,” in two very different situations. In the first case, your doctor is very late and you stay in the waiting room reading a copy of National Geographic , the official magazine of a scientific society.

In the other case, you come across an account of this discovery while leafing through the National Enquirer , an American tabloid distributed in supermarkets, while standing in line at the grocery store.

This is roughly the type of situation that we have tried to reproduce with children . We discussed with them the subject of these animals they had never heard of. With some we shared the news by putting it in a fantastic frame, telling them that dragons or ghosts collect these fish. With the others, we evoked the “nicknames” taking a scientific context, where they would be used by doctors or scientists.

Children, as young as four, were more inclined to say that “nicknames” really existed when they heard about them in a scientific context rather than in a fantasy context.

Good use of expertise

One of the main ways we as adults learn new things is to hear about them from others. Imagine hearing about a new species of fish from a marine biologist – rather than your neighbor who mostly likes to talk about alien stories. Your assessment of the expertise and reliability of these sources will or will not consolidate your belief in the reality of this fish.

In another research, we introduced the children to new species of animals, sometimes plausible (like a fish living in the ocean), sometimes incredible (for example a fish living on the moon), or improbable (such a big fish. than a car). Then we gave them the choice of either checking for themselves that the species exists or asking someone. They were also made to listen to the reports of a zookeeper, for the role of the expert, or of a chef (in the role of the non-expert character).

We have found that children believe in plausible species and reject incredible species. They made their decision by comparing the new information to their prior knowledge. For unlikely animals – ones that might exist but were rare or strange – children were much more likely to believe when the zookeeper claimed they existed than when the chef did.

In other words, children call on their expertise, just like adults.

If children are so smart, why then do they believe in Santa Claus?

The reason is simple: their parents and many other people go to great lengths to maintain the myth of Santa Claus. A recent study estimated that 84% of parents take their child to meet two Santa lookalikes at least during the holiday season.

“The Elf on the Shelf” – initially an album about these elves who check to see if the children are good and tell Santa Claus – is now a multi-million dollar franchise. And there are postal services that provide personalized responses to children’s letters.

Why do we feel compelled to put in so much effort? Why does Uncle Jack insist on going up to the roof on Christmas Eve and ringing some bells?

Simply because children are far from thoughtless and don’t believe everything they are told. We adults must therefore multiply the evidence: the bells on the roof, the Santas alive at the mall, the half-eaten carrot on Christmas morning.

The indices evaluated by children

Given all of these efforts, it would be almost irrational of children not to believe in Santa Claus. By adhering to the myth, they are in fact exercising their scientific thinking skills.

First, they assess their sources of information. As a project in my laboratory shows, they trust an adult more easily than a child to judge what is real or not.

Then, to rule on the existence of Santa Claus, they refer to a number of evidence, such as the empty glass of milk and the cookies found half-eaten on Christmas morning. Regarding other fantastic beings, like Halloween witches, children use similar clues to support their beliefs.

Finally, as their comprehension skills grow, children dwell on some of the absurd points of the Santa Claus myth: how a portly man can descend into a narrow chimney, how animals could they? steal…

Some parents wonder if they are harming their children by relaying the belief in Santa Claus to them. Philosophers and bloggers have put forward a number of arguments against the perpetuation of a “lie”, some claiming that this could induce a permanent distrust of parents and other authorities.

So what to do?

There is no evidence that belief in Santa Claus can significantly affect children’s trust in their parents. On the other hand, not only do they have all the tools they need to find out the truth, but taking an interest in Santa Claus can also give them a chance to practice these abilities.

So, if you think it is fun for you and your family to invite the figure of Santa Claus to accompany you during the holidays, you should not hesitate. Your children will do well. And maybe they will even learn something.

Author Bio: Jacqueline D. Woolley is Professor and Department of Psychology Chair at the University of Texas at Austin