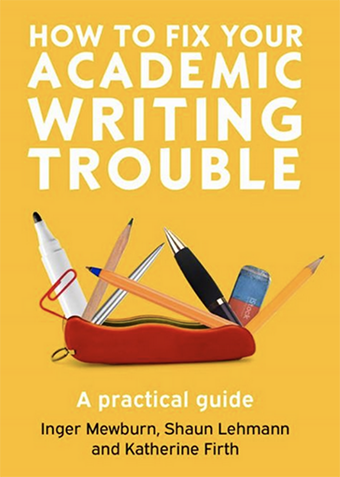 “Your academic writing trouble and how to fix it” was born of our frustration at reading the strange comments supervisors sometimes write on thesis drafts. Sometimes academic feedback makes even less sense than the text that inspired it. In this book we work backwards from these hard to interpret supervisor comments to tell you want we think your reader is complaining about how how to fix it. Writing Trouble will be a swiss army knife of a book, containing a range of strategies and tactics for fixing academic writing that is good, but not yet great.

Our publisher has been relaxed about us sharing our work in progress on our blogs and the process has really helped us make the book better – so thank you!. Parts of this post on hedging language will end up in chapter six: “Uncritical! How to make writing that persuades”. We are currently in the final (more boring) part of editing the book. This segment is the rough first draft I wrote some time ago. Katherine is currently working on expanding and polishing it up, so we welcome your feedback! If you’re interested in knowing more about the book before we publish, you can sign up for our writing trouble mailing list.

We are also collecting examples of hard to understand feedback to illustrate the book – if you’d like to share feedback you have received we are collecting them here. We hope to be able to offer people who donate text a discount on their purchase – stay tuned!

Sometimes writers get feedback encouraging them to be more assertive, like “I don’t hear your voice” or “yes, but what is youropinion?”. When you get this kind of feedback, your reader is frustrated because you are not ‘taking a stand’ in your writing. Taking a stand means making an argument for – or against – something.

While academic writers need to take a position in their writing, they must be careful not to over claim, especially when putting forward a theory to explain the observed evidence. Knowing exactly how much you know and don’t know about something – and how to write in a way that your reader understands your level of certainty – is fundamental to being an academic, which is why skilful academic writers know exactly how to employ ‘hedging language’. Being precise is one of the most, if not the most, important of the academic values and we must be as precise about our uncertainty as we are about everything else. Hedging language is tentative: words and phrases like might, maybe, sort of, I think, possiblyand so on. These terms help us modify strong claims without losing valuable nuance.

Sometimes we see writing advice that suggests writers get rid of hedging language to avoid sounding ‘wishy washy’, but remember – when it comes to writing you are at a painful, middle-class dinner party. It is vital that you do not conflate ‘taking a stand’ with ‘writing forcefully’.

Just as yelling louder will not help you win a fight with your family member at a Sunday dinner, getting rid of hedging language to look more confident will not endear you to your academic reader. People not trained in academic ways of thinking can find the use of hedging language extremely frustrating to read. However, we are dealing with hard core notions of truth, and certainty, here – we must therefore be careful. With the possible exception of maths (in particular, maths proofs), all research is, to some extent, tentative. Hedging language introduces intentional vagueness to avoid sending clear signals to your reader.

You might be thinking – “but early in this book you told me I should avoid vagueness – now you are telling me to introduce it deliberately? What gives?!”. We know it sounds contradictory, but when you write academically you must bear in mind that you are communicating withinacademia, not just communicating about what you found out. Going with the idea that academic writing is a form of fencing or a passive agressive middle class dinner party, there are (largely hidden) rules around how you can express our interpretations of data.

Hedging helps us be intentionally vague so that the reader is forced to ‘read between the lines’ about what we think about a data. When we use hedging language we must balance between what we see in the data we are writing about, and the world from which we extracted the data. One motivation for doing this, according to Hyland (1998), is to “seek self-protection from negative consequences of poor judgment”.

Here’s a silly, totally made up example: imagine you have been taking photos of the night sky and have noticed there are more stars than there should be. You could form a theory that the extra stars are UFOs, but, if you want to be taken seriously in academic, you’d want to be very careful about how you write about this theory because, well – most people don’t believe in UFOs. The incautious student would write something like this:

The word “are” signals that there is a direct correspondence between the data and the theory. It’s highly likely that an academic reader would just put a line through this sentence and write “rubbish”. If instead, you want to draw your reader into your theory while shielding yourself from ridicule you could write something like this:

“One possible interpretation of the data shown in the tables and images above is the existence of UFOs or other, unexpected stellar artifact”

This sentence is top notch hedging in action. We have actually said something faintly ridiculous (that UFOs exist), but we have left the reader unsure of whether we believe the statement either. We included a classic hedge word (possible) at the start of the sentence and then threw in a modifier (or) at the end.

In our UFO example, hedging language functions to distance ourselves from the proposition so we don’t entirely ‘own it’. It’s a bit like putting something on the table and backing away, then pointing at the item and asking the reader what they think it is, rather than telling them what you reckon. Hedges rely strongly on context to make sense – and reader will subjectively interpret them. In a strange way, hedging language helps us collaborate with our readers to find collective meaning.

The use of hedging language is connected to how we make knowledge within communities. Academia is profoundly hierarchical and it is important to bear this in mind when you want to disagree with anyone else’s theories, interpretations or evidence. We use hedging to signal to the reader that we are cautious, careful researchers who pay due attention to the accepted ideas and theories in our field, not cranks. Rarely is academic writing confrontational; the clever academic writer strives for an air of humbleness when they disagree with anyone.

Cultivating the right degree of academic humbleness is a matter of careful word choice, including careful use of hedges. This is one of the many reasons academic writing is accused of being obtuse, but it’s sadly unavoidable when you are a student and need someone to approve of your work. Hedging language is, therefore, a vital part of any researcher’s writing toolkit. Hedging language helps us indicate the precise degree of uncertainty we feel about a finding, fact or idea.