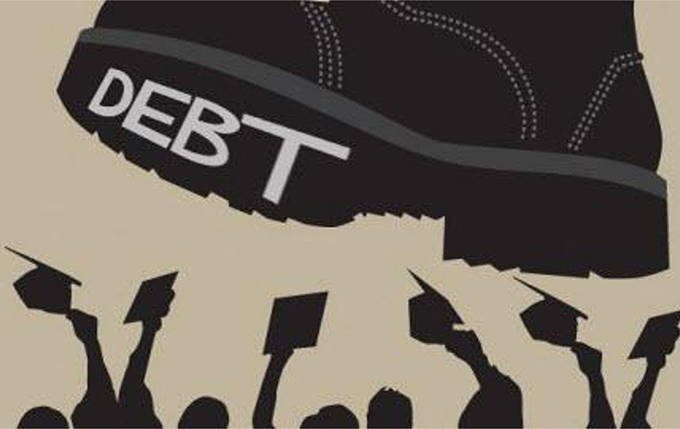 YouTube is such a fine resource for learning things. It’s only drawback (beyond the way how it supports pedophilia and censors counter-narrative views) is the one common to any learning tool: if you don’t know what you should know, you’re unlikely to learn it. Today I’ll highlight a couple stories which strike me as fairly typical.

A Single Death is a Tragedy; a Million Deaths is a Statistic
–attributed to Stalin.

Student loan debt in this country is now around $1.5 trillion. When I started this blog 5 years ago, it was under a trillion dollars, but it can only head up, because these loans, in many cases, simply cannot be paid back. Trouble is, numbers this large are just statistics, they don’t register for most people.

YouTube to the rescue, as it has individual testimonials, “single deaths” of people from student loan debt. I want to highlight a few, because what we’re doing to our next generation with these debts is positively criminal…though in today’s generally lawless society (at least for those at the top), no charges will ever be filed.

My first story is from an art student who ran up over $100,000 in student loan debt.

“It was my lack of experience, and my naivety, that put me in this position…”

In order for a student to qualify for student loans, the student must go to an accredited school. Accredited schools certify, in writing, that they will act with integrity…but many accredited schools regularly exploit lack of experience and naivety in kids as they come out of high school, signing them up for a mountain of debt.

So, yes, there are those who point and laugh at this art student for foolishly getting so much debt for an art degree…but I find this as unsettling as pointing and laughing at a baby for crying when an adult rips candy from the baby’s hands.

The above is how many get smashed by student loans. After they get their bachelor’s and see that there’s not much available, they go back to grad school. Now, yes, at this point perhaps the schools are no longer taking advantage of kids right out of high school but we still have a problem. The schools know full well they’re offering graduate degrees in fields that can’t pay back what they’re charging, as only the schools are hiring those graduate degrees (and moreover the schools flood the market with people for these scarce jobs)…they set the pay, you see. There’s an obvious conflict of interest here as the schools once again knowingly engage in hurtful behavior.

By 2011, she graduated with over $90,000 in debt, got another job and started making payments. Trouble was, the payments were too much based on what the school was paying her, so she asked for help.

“…I got in an IBR repayment plan…”

Most student loans are in default, or would be if they were being honestly accounted. One trick is “IBR” repayment, “Income Based Repayment,” which lowers your payments based on your income. There are many variations on IBR, but they all screw you. Even if you’re not being paid much, you’re making payments, so it’s all good, right? Nope:

Yes, you’re making payments, but you’re not covering the interest, so your loan goes up, now there’s more principal on the loan, so you owe more interest you can’t pay. It’s a death spiral. She didn’t know what she was signing up for.

She had no idea how she was being screwed, but she’s not alone, there are 40,000,000 people with student loans now. Many of them are being tricked into this abyss.

She’s already figured out her job as a professor will never pay back the system that indebted her to become a professor, and she’s learned, too late, that even though she’ll be effectively bankrupt forever, she can’t clear her student loan through bankruptcy, even though she was taken advantage of every step of the way to her mountain of student loan debt.

I assure the gentle reader, this particular student is very far from alone. She has some good advice, too late to help herself with it…but I doubt any prospective student will ever hear her words of wisdom freely available on YouTube, because how would they find her?

My next student accrued over $200,000 in debt, again getting suckered into the “go get a graduate degree” trap.

“…at the community college it was like, here, take this free money…I was not fiscally wise…”

So many kids are cheated like this in community college, it’s pathetic. Some 28% of students with loan debt don’t even know it. How could that possibly happen in a system acting with integrity? Doing the math that means well over 10,000,000 of our kids with student loan debt had no idea they signed up for it until after school. The vast majority of community colleges should be shut down, plain and simple.

She immediately went back to grad school, spending another 6 years getting her Ph.D. She didn’t have to make payments while in grad school, and thought that was great…but once again the interest on that loan simply compounded.

When she finishes paying this off (if she does), she’ll have paid over $750,000 for this loan. The actual cost to the school for educating her was probably around $10,000. How is this not exploitative? She wasn’t dealing with a sketchy fly-by-night loan place, either:

“…this is Sally Mae. They just got handed billions of dollars!”

It really is demented how our country’s system creates money from nothing, and uses it to enslave, rather than help, the citizens. I sure look forward to a time when I’m not so alone in wondering why we have such an evil system.

“…work in a field where I make nothing…”

I again point out: the schools charging so much for graduate degrees know they’re trapping the students into a deadly system, because they know how much professors will make.

“…how ridiculous higher education has become…”

Well, at least she learned something in her ordeal. Too bad finding these types of videos is too tough to expect kids to see them before stumbling onto campus.

“…the thing that makes me the saddest…I wanted to be a parent….the more we make the more we pay in student loans.”

She’s now heading towards her late 30s, and is doomed. By the time she pays off that debt, assuming she can, she’ll be close to 60. So, theoretically, at the age of 60, she’ll be able to afford to have a child. Higher education didn’t just enslave her, they’ve effectively sterilized a generation, and in many cases they’re taking the most intelligent of our population out of the gene pool.

“…they sell you this dream world with no intention of following up.”

The schools have a very bloody hand in the carnage they’ve wreaked on a whole generation. I shouldn’t be alone in seeing that higher education has a real problem here.

More importantly, I shouldn’t be alone in seeing how to fix it: end the student loan scam.