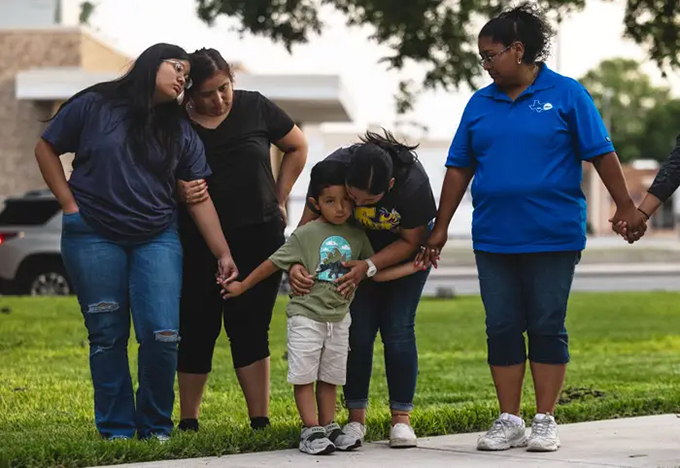 At least 19 children and two adults were killed when a teenage gunman shot them at a Texas elementary school on May 24, 2022 – the latest mass shooting in a country in which such incidents have become common.

A lot remains unknown about the attack at Robb Elementary School in Uvalde, a small, predominantly Latino town in South Texas. Police have not as yet revealed a possible motive behind the attack, in which the 18-year-old went classroom to classroom dressed in body armor and carrying two military-style rifles, according to reports.

As the graph below shows, the frequency of school shootings in the U.S. has increased dramatically over the last few years. 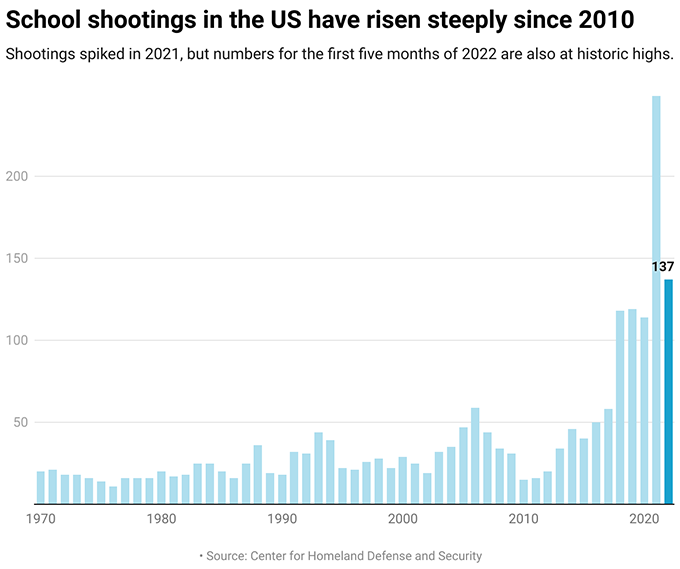 1. School shootings are at a record high

The attack at Robb Elementary School was, according to the data, the 137th school shooting to take place in the U.S. so far this year. In 2021, there were 249 school shootings – by far the worst year on record.

James Densley, of Metropolitan State University, and Hamline University’s Jillian Peterson log such incidents in a database of U.S. mass shootings. It has helped them build a profile of the typical school shooting suspect – some of which appears to apply to the suspect in the latest massacre, such as his age and gender. In general, school shooters overwhelmingly tend to be current or former students of the school they attack. And they are “almost always” in a crisis of some sort prior to the incident, as evidenced by changes in their behavior. Suspects are also often inspired by other school shooters, which could go some way in explaining the rapid growth in such attacks in recent years. 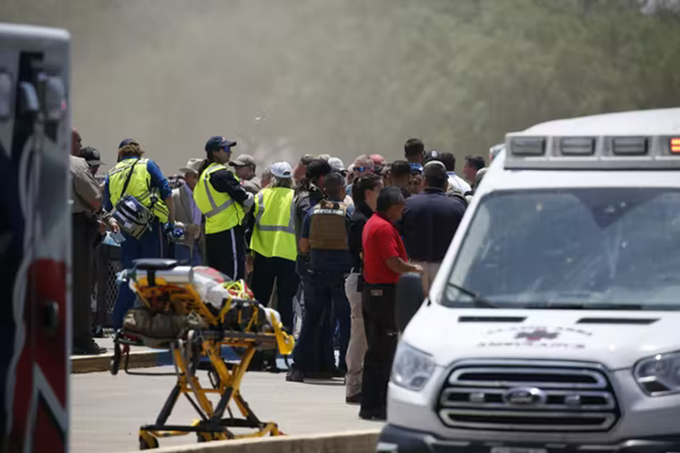 Densley and Peterson write that the “overwhelming number of shootings and shooting threats” have left schools struggling to respond, resulting in a patchwork of different measures that have failed to slow the frequency of attacks across the states. The two scholars contrast this local response to school shooting in the U.S. to the national legislative action taken in countries such as the U.K., Finland and Germany, concluding: “School shootings are not inevitable. They’re preventable. But practitioners and policymakers must act quickly because each school shooting feeds the cycle for the next one, causing harm far beyond that which is measured in lives lost.”

While some of the traits that make up a “typical” U.S. school shooter may appear in those living in other countries, too, there is one area in which the U.S. stands alone – access to guns.

The suspect in the Robb Elementary School reportedly bought his military-style rifles shortly after his 18th birthday. That he was able to do so apparently with ease is likely due to the lax gun control laws in place in Texas, where the alleged shooter lived, and in the U.S. That lack of substantive regulation has led to an ever-increasing number of firearms in the hands of U.S. residents – a trend that has only accelerated in recent years, as University of Michigan’s Patrick Carter and Marc A. Zimmerman and Rebeccah Sokol of Wayne State University note.

“Since the onset of the public health crisis, firearm sales have spiked. Many of these firearms have ended up in households with teenage children, increasing the risk of accidental or intentional injury or fatalities, or death by suicide,” they write. It also makes it easier for would-be school shooters to get their hands on firearms that left unsecured around the house.

“Most school shooters obtain the firearm from home. And the number of guns within reach of high school-age teenagers has increased during the pandemic,” they write.

In response to the killings in Texas, calls for stronger gun control laws are already being made, including by President Joe Biden in his speech the night of the shooting. But as evidenced by the lack of meaningful political action after the Sandy Hook massacre, in which 20 children and six school staff members were killed, the chances of getting anything through Congress appear slim.

This is despite polling that shows that a majority of Americans actually support stronger gun laws such as a ban on assault weapons.

So why doesn’t the government do what the people want? Harry Wilson, a professor of public affairs at Roanoke College, has a three-part answer.

First, the United States is not a direct democracy and, as such, citizens do not make decisions themselves, Wilson writes. Instead, the power to make laws lies in the hands of their elected representatives in Congress. But “the composition and rules of Congress are also crucial, especially in the Senate,” he writes, “where each state has two votes. This allocation of senators disproportionately represents the interests of less populous states.”

Secondly, “polling and public opinion are not as straightforward as they seem. Focusing on only one or two poll questions can distort the public’s views regarding gun control,” says Wilson.

And finally, the influence of voters and interest groups acts as a counterbalance to popular opinion.

“Gun owners are more likely than non-owners to vote based on the issue of gun control, to have contacted an elected official about gun rights, and to have contributed money to an organization that takes a position on gun control,” writes Wilson.

Meanwhile lobbying groups representing huge membership, like the NRA, put further pressure on elected representatives. “Elected officials want votes. There is no doubt that money is essential for political campaigns, but votes, not money or polls, are what determine elections. If a group can supply votes, then it has power,” writes Wilson.