Gender equity in academic science may seem like a pipe dream, with the percentage of scientific leadership positions held by women in institutions a mere 5-20%

However, new data from science societies – the professional associations that bring researchers of a particular speciality together – tell a different story.

Published today, research from my colleagues and I shows that globally, women make up about 33% of zoological society boards, and about 25% of executive positions (presidents, vice presidents, treasurers and secretaries).

While still short of equality, this represents a trend in the right direction. And we can take some lessons from some of the finer points of our analysis to address gender equity in science leadership more broadly.

To that end, we’ve created a Gender Equality Checklist for scientists to apply in their own professional operations. A few easy examples:

Scientific societies are organisations with a goal of advancing scientific knowledge through grants, conferences, and journal publications. They also help to unite geographically distant researchers within a field, and provide mentors or role models for early-career academics. Perhaps most importantly, societies provide opportunities for networking, both formally and informally.

Using quantitative models, we tried to pinpoint potential predictors of gender ratios across more than 200 societies in the field of zoology. We found that older, larger societies were more male-biased.

But we also saw one of the most important factors in predicting whether women held leadership positions in a society was simply a visible statement of diversity, inclusivity or anti-discrimination.

While it may make intuitive sense that a society that states its valuation of equality does have a more balanced representation of men and women, it’s nice to see this idea supported by empirical data.

Regardless, our finding that the number of female executives can be predicted by the number of female board members shows that each affirmative action is likely to be additive, all accumulating towards the end goal of equality. Our evidence suggests that values expressed by a society often reflect – or influence – its membership.

Interestingly, our study also revealed that the geographic location of a society’s headquarters also affected female leadership. Australasia had the highest percentage of female board members and executives (around 43%), followed closely by North America (38-42%) while Asia lagged behind all other continents at 18-22%. 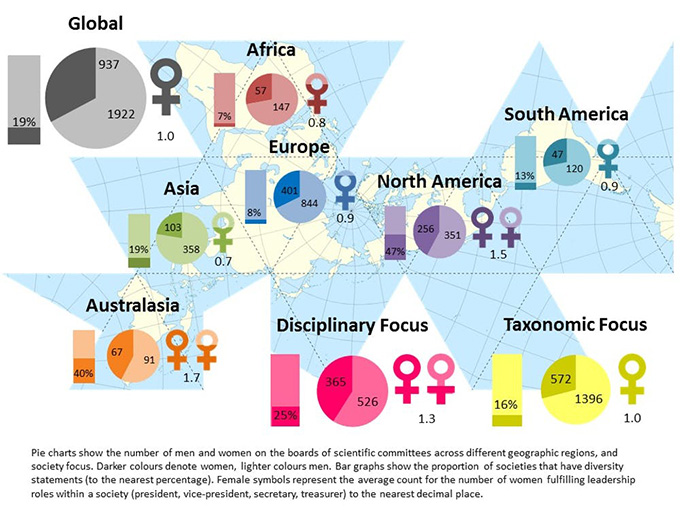 There are no lack of studies bemoaning the state of women in science. Not many, however, allow insight into positive or negative factors that contribute to equality (especially quantitatively, with the data and numbers that scientists love to see).

In this study, we wanted not only to report on the state of affairs, but also to increase our understanding about the characteristics of societies that promote women in science, and identify actionable steps that societies can take to help reach equality.

Published in the paper, our Gender Equality Checklist does just that: it can be brought to any Annual General Meeting (AGM) to help societies evaluate their own values and courses of action to help promote diversity and equality within their own field.

Along with other actions such as keeping demographic data and offering mentorship opportunities, these steps forward can help create a much more inclusive, safe and thus productive and efficient scientific network or body.

The importance of gender equality in science

I’m a behavioural ecologist, with the benefit of having amazing female (and feminist male) mentors – both past and present – throughout my career.

One thing I am asked (more often than I should be, I think) is: why do we care about gender equality in science?

If the intrinsic values of equality, removal of subconscious bias or simply the human right to educational opportunity isn’t enough, consider the evidence.

Various studies have shown that more diverse and gender-balanced organisations (in science and elsewhere) are more innovative, productive, efficient and personally satisfying to members or employees. It seems like a no-brainer that we should be aiming for this kind of culture in science.

Scientific societies may, at first glance, appear to play a small role in the life of an academic: we pay our membership fees, attend a conference or two, and encourage our students to apply for small societal grants.

However, the role of the scientific society in the pursuit of gender equality in science and related fields is likely bigger than we have previously thought (if we have thought about it at all).

These boards make publishing and funding decisions, contribute to advocacy, and provide a platform for mentoring and networking across generations and nationalities. Their importance should not be underestimated.

The seemingly sluggish rate of improvement for women in science can tend to inspire hopelessness. This is symptomatic of institutional culture, with staff turnovers and bureaucracy in general being slow processes, some taking decades to visibly change.

However, scientific societies give us hope. The young membership, frequency of elections and more relaxed networks that used to contribute to a reputation of an “old boys’ club” feel of societies may now be positive influences on female promotion.

Here, behind the scenes, we may find more opportunity for rapid change in the right cultural environment.

Author Bio: Dominique Potvin is a Lecturer in Animal Ecology at the University of the Sunshine Coast