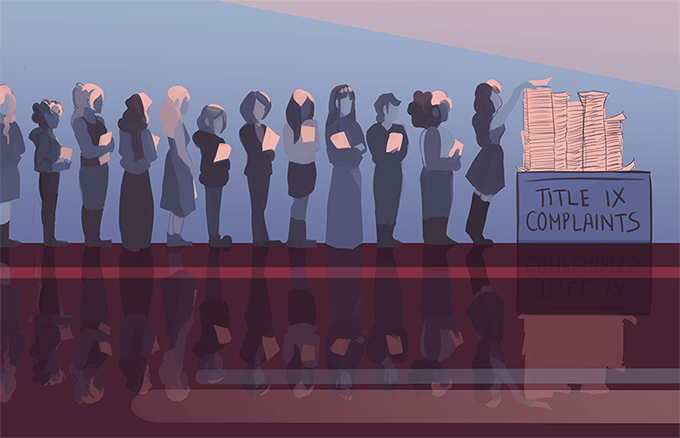 I remember when I was a big fan of the ACLU, as they would defend the underdog, some deplorable guy who, even if I didn’t like whatever he said, I still felt he should have a defense from an organization skilled in protecting the rights all citizens of this country have.

Those days seems to be over, as the ACLU really seems to be converged, taken over by Leftists who now feel only the people who think rightly deserve protection. Heck, they’ve pretty much declared they no longer care about defending civil liberties, at least not if gets in the way of their ideology.

I’ve written many times before how Title IX has turned into yet another weapon the Left uses to destroy faculty and students on campus who do not adhere to Leftist values (basically anyone to the right of Chairman Mao is fair game). Particularly vile is how a male, when accused of sexual wrongdoing by a female, can’t really defend himself, because he has so few rights. Yes, I know this happens to some extent off campus (Hi Justice Kavanaugh! Isn’t it odd how the witnesses who recanted their testimony won’t be charged with anything, despite the clear harm they’ve done to his family), but how the kangaroo campus court system handles these things is over-the-top.

Betsy DeVos recently proposed, among many other things, giving rights to those accused under Title IX. That sounds like the kind of thing the old ACLU would approve…but what of today’s converged ACLU?

INSANE: ACLU Now Opposes Accused Students Having So Many Rights, All To Bash Trump

Trump Derangement Syndrome (TDS) is a real thing, I have some friends with it, so filled with hatred of the man they can interpret nothing he does in a positive way, and readily believe any accusation made against him, even with a media well established as being miserly at best with the truth regarding Trump.

So, while ordinarily the ACLU would want rights given to the accused, the fact that Trump’s representative is asking for such means they have no choice but to oppose, or so the headline says. What kind of reforms are we talking here?

The Title IX reforms, as David French aptly describes at National Review, requires colleges to end their kangaroo courts when it comes to sexual assault…The new rules require colleges to permit cross-examination of witnesses including the accuser by attorneys for the accused, and stops universities from allowing evidence from those who refuse cross-examination. Furthermore, the new Title IX regulations allow the accused to see the evidence given against them – and yes, there were schools that prohibited the accused from even knowing the nature of the accusations against them.

Having personally been involved with a kangaroo court where evidence submitted by the accused was systematically destroyed, and then the accused was convicted because he couldn’t prove his innocence, I assure the gentle reader the above really is how many of our campus court systems are run.

Gee whiz, none of the above sounds particularly unreasonable. Additionally, the definition of “sexual harassment” was tightened up, because it was clear the very loose definition was being abused by Title IX fiefdoms on campus.

Surely the ACLU isn’t against putting at least some due process into the court system here? Allow me to edit their official statement:

…We strongly oppose it…inappropriately favoring the accused and letting schools ignore their responsibility under Title IX to respond promptly and fairly to complaints of sexual violence.

Hey, I concede the rights the accused have definitely slowed down the wheels of justice, but to snarl at every change as bad, even granting the accused the right to know what he’s accused of, strikes me at plenty deranged.

Since I’m citing a decent news site, they allow comments, and one bears further discussion:

So the ACLU just came out as opposed to “Innocent until proven guilty”? Wow!

Why are rapes being investigated by Gender Studies professors and not the police?

Yes, the ACLU does seem to have put itself in a funny position here.

Why are rapes being investigated by Gender Studies professors? It’s a good question, and the answer involves quirks in our laws which grant our campuses (the older ones) considerable autonomy in how alleged crimes are investigated and punished. Yes, admin could pass over their power to the local police/legal system, but that would cut into their power…it’s not gonna happen.

I also feel the need to point out that the kangaroo system for investigating rapes is often the same system used for investigating “improper” behavior by faculty (note carefully: espousing views to the right of Chairman Mao would be improper on many campuses). One the other hand, wildly inappropriate behavior by admin gets such a pass that they seldom even make it to the campus court system.

As a gratuitous kick, I also point out this is all paid for by the student loan scam.