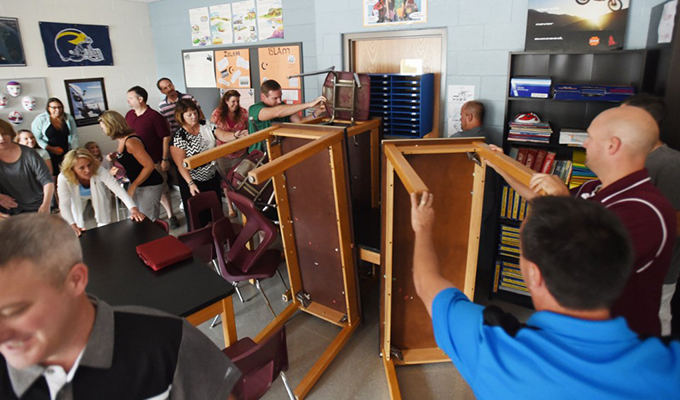 Recent school shootings and the March for Our Lives rallies held in cities around the world on March 24 have rekindled debates over how to keep students safe.

“The notion of ‘it can’t happen here’ is no longer a notion,” said Sheriff Tim Cameron of St. Mary’s County, Maryland after a student opened fire on March 20 at Great Mills High School, killing one student and injuring another.

Increasingly, schools are turning to active shooter drills and videos to prepare students and staff to face a gunman. As a sociologist who studies the social impacts of security strategies, I am concerned about the unintended ethical and political consequences of these exercises.

All students deserve safe learning environments. Yet training kids to take responsibility for their own survival while treating gun violence as inevitable may make schools – even those that are never the site of a shooting – feel unsafe. Effects like this need to be weighed against the potential benefits of active shooter training to ensure that measures to protect students do not cause unintended harm.

By 2013, over two-thirds of public schools in the U.S. used lockdown drills to prepare for an active shooter. In these exercises, students huddle in classrooms to practice waiting for help from police and SWAT teams.

Lockdown and “run, hide, fight” active shooter drills are designed to habituate students and staff to an active shooter situation. However, some schools have faced criticism for using overly realistic simulations. For example, when officers armed with rifles burst into a Florida school for an unannounced drill, parents were outraged.

Training materials designed for teachers, like a computer simulationproduced by the Department of Homeland Security, may partially shield children from seeing scary scenarios. However, even when schools focus their trainings on teachers, drills remind students of the possibility that they will face a shooter. A video created by the Santa Ana Unified School District tells teachers to develop a “run, hide, fight” plan and urges them, “Communicate these plans to students. Rehearse, practice, and drill each plan on a regular basis.”

By having students practice responding to a pretend emergency, school administrators hope they will respond the same way to a real one. However, training exercises that instill fear may have negative effects on students. Research shows that exposure to neighborhood violence alters kids’ cognitive performance, affecting how quickly and accurately they respond to cues on a computer screen. If simulated or anticipated violence has similar impacts on kids’ cognition, it could impact their classroom performance.

In addition, moral lessons are hidden within the “run, hide, fight” model. Training videos built on this model are full of underlying messages about the right thing to do during a shooting.

Run: “Encourage others to leave with you, but don’t let them slow you down,” says a training video promoted by the Department of Homeland Security for schools and workplaces.

Hide: In a video published by the Oregon Trail School District, a teacher explains, “We’re gonna push some stuff against the door. That’s called a barricade. We’re gonna barricade the door so nobody can get in.”

Fight: A training video produced by Stanford University advises, “Fire extinguishers are great as weapons and as a chemical spray. Coffee cups, laptops, books – anything you can do to increase your odds of survival is a good tactic.”

Students and teachers are led to reimagine their learning environment as they rehearse the “run, hide, fight” strategy. To plan escape routes, they must picture classrooms and hallways as potential crime scenes. To prioritize their own survival, they must close the door to the shooter and the injured, putting to rest moral questions about leaving others to die. They must do away with the ideal that schools are weapon-free zones and spot classroom objects to wield in battle.

Social scientists know that the strategies people use to protect themselves shape their social lives, regardless of whether they work. Carrying a gunfor protection, for example, bears on a person’s identity, political views and social ties even if they never use it. Women who take self-defense classes likewise report feeling newly empowered afterwards, even if they have never been threatened.

While the “run, hide, fight” response is modeled on strategies law enforcement teams have used effectively, there is little evidence as to whether or not it will work to minimize harm in school shootings. In the recent Parkland, Florida shooting, it seems the shooter designed his attack with the school’s emergency drills in mind.

Whether or not active shooter training works, however, it is likely to shape the way students and teachers think and act at school and beyond. Schools play a large role in the formation of political views. When kids learn to plan for school shootings the same way they plan for fires, earthquakes and tornadoes – inevitable events beyond their control – how will it affect how they vote, organize or lead in the future?

Will it impact their trust in public schools, police, the government or each other?

Nobody wants to feel powerless in the face of an attacker, and one casualty from a school shooting is too many. Parents, educators and students naturally seek to do everything possible to limit the harm these tragedies cause. Yet, active shooter training strategies have consequences that communities need to consider. Knowledge is power, but maybe books shouldn’t be weapons. I argue that the hidden lessons of active shooter training need to be openly debated before they are unintentionally ingrained in an entire generation of students.

Author Bio: Devon Magliozzi is a Ph.D. Candidate in Sociology at Stanford University