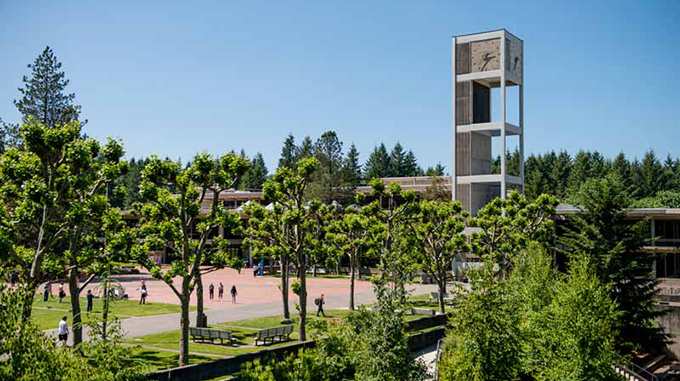 (Alternate Title: Race Riots At Evergreen Cost 20% Of Student Base)

One of the clearest signs of a school’s convergence, takeover by Social Justice Warriors (SJW), is the race riots. More accurately, it is the response to riots that gives the situation away. The normal response to student rioters is to eject the rioters from the school, while at converged schools, the response is to yield to all rioter demands…which only promotes more riots.

Now, certainly, sometimes there are justifiable reasons to riot or at least protest, but the demands of SJWs at our schools are demands which further destroy the education at the school. More diversity hires, for example, are demanded, and the school loads up on these useless administrators, whose only job is to provoke the students into causing more riots…it’s a death spiral.

When a school becomes converged, the only quick solution is bulldozers. This, of course, is never on the table, and instead the school can only die a slow death as future students realize a school with incessant riots and no education is a poor choice to attend at all, much less for $30,000 or more a year.

I’ve covered Mizzou’s slow death already, but, on the off chance a gentle reader thinks this is a mere fluke, I now turn my attention to Evergreen State college, which became famous for its riots last year.

Now, this is a publicly funded school, and that means every penny of the budget is already spent a year in advance…a loss of this many students is basically a complete disaster since the budget is based on future student enrollment. Administration at every school I’ve been at has assured me a sudden 10% drop in enrollment will lead to a school closing its doors. I’m sure this isn’t a perfectly accurate characterization…but the loss of so many students is still a bad thing.

“… it spurred an anonymous call for Bridges’ resignation by way of flyers recently inserted into faculty mailboxes declaring “Please Resign,” among other disparaging comments…”

It’s quite infuriating how these public institutions operate. Their business model is “find suckers who want free checks,” and when they “somehow” manage to get growth, the administrative caste grows, and awards itself huge bonuses for its clever “leadership.” On the other hand, if the school doesn’t grow, faculty take it on the chin; there’s never any talk of eliminating a few administrative positions, except, of course, “anonymously” by faculty who have no power to make this reasonable decision.

Even if the Poo Bah here resigns for his horrible management, he’ll still get a 7 figure golden parachute.

I should mention here that, according to the Wiki, the number of administrators at Evergreen grotesquely outnumbers faculty. They have over 550 admin, and the school estimates around 3100 students next semester. Using the enrollment projections, I feel the issue deserves some large font, gratuitous capitalization, and excessive exclamation points as well:

Evergreen Has MORE THAN 1 Administrator For Every SIX Students!!!!!!!!

Time and again we’re smacked in the face with how little money there is for our schools. Time and again this lack of money is used as justification for courses with hundreds of students in the class, as well as skyrocketing tuition.

Imagine if instead of spending all the money on administrators, a school focused on hiring faculty. How attractive this school would be if it advertised that its largest class size was 6! Parents would be breaking down the door to get their kids into such a school, especially a publicly funded one. Instead, we get triple digit class sizes and faculty who report to a dozen or more different overseers.

The student loan scam has covered our campuses with money…but little of it goes to education, as Evergreen and many other schools demonstrate.

I grant even if Evergreen used the money wisely and kept their class sizes to 6, they’d still have trouble attracting students because of the race riots, but I really feel the need to harp on just how obnoxious it is that so much money is being wasted on the administrative caste. Each admin makes 2 to 20 times as much as faculty, incidentally. A fair assessment of the money pouring into higher ed today reveals we could probably have class sizes of three and schools (at least the ones with government support) could still be profitable at current tuition.

Realistically, we should just return tuition to sane levels, and go back to class sizes in the teens, but I digress.

Adding insult to grievous injury is the extraordinary incompetence of the administrators. Faced with such a disaster of falling enrollment, how are they responding?

This “Mizzou Effect” is a known factor among college leaders, and the official said Evergreen has been in contact with University of Missouri to learn from their experience.

How incompetent do you need to be to not figure out that “race riots” and “no education” could be factors in falling enrollments? Whatever level of incompetence that is, compound it exponentially for a thousand years to get to the point where going to a dying school to ask them for advice on what to do is a good decision. For what it’s worth, I gave Mizzou some obvious advice, but they won’t follow it. Instead, Mizzou will double down on their sportsball programs, and use their empty dorms to rent out as hotel rooms for the games. They’ve forgotten they’re supposed to be a [email protected] school.

I submit that Evergreen also has forgotten it’s supposed to be about education. We can establish this by taking a look at Evergreen’s ideas to address their problem of race riots and lack of education:

…the enrollment decrease will likely plateau and the college will in the coming years grow its ranks again.

The first part of the administrative plan to fix their problem is “insane optimism and simply make up numbers for future enrollment.” This is pretty idiotic: our higher education system is massively overbuilt, so prospective students have many places to choose from. Even if education is terrible at other schools, the whole “but no race riots” is still going to make Evergreen a tough sell over any other school.

Evergreen is “doubling down on efforts to recruit older, non traditional students, as opposed to straight from high school.” This demographic includes adults outside of traditional college age, as well as returning-to-college students.

Uh, if the kids right out of high school aren’t stupid enough to go to Evergreen, why would the adults be so easily suckered? Already, around 80% of US citizens go to higher education at some point, so there’s not much room there for growth in scraping up the remaining 20% of the population. The 20% not going now are probably too intelligent or simply incapable of going under any circumstances, after all (I’ll politely ignore the possibility that the 20% not going to college includes much of the lower end of intelligence…).

To that end, Evergreen officials have developed a mass marketing campaign…

Evergreen hopes blowing money on marketing will address the issues of race riots and no education? Does anyone else think we’re not exactly getting our money’s worth for this legion of administrators?

And that’s where Evergreen’s ideas end as far as how to address falling enrollments due to race riots and lack of education. I really should emphasize I’m hardly alone in seeing what the problem is, as a former employee of Evergreen says much the same:

“A fix, if even possible after the damage already done, will come only be returning Evergreen to its roots as a college steeped in the concept of open inquiry inherent in a true liberal arts education,”

This option won’t be on the table, as only faculty could accomplish the above. At many schools, admin outnumber faculty by a huge margin and strangle out any possibility of using education to improve a school’s chances.

If the public only understood how much of their tax dollars are being wasted at schools like this, I believe my easy solution, bulldozers, would be enacted quite quickly.

Instead, we’ll get to watch this school die a slow death; it might be a few years, it might be a decade, but it’s inevitable. I imagine at some point I’ll get the amusement of watching the school have only one faculty member (but still over 500 administrators!) teaching all 300 remaining students in one class on the last semester before the school finally closes its doors.