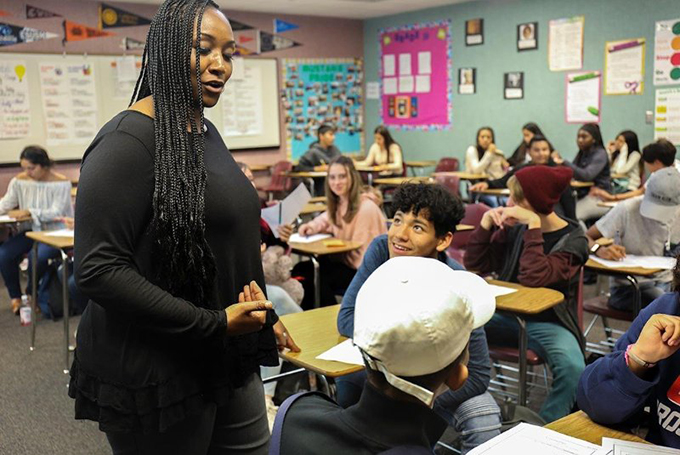 Education Secretary Betsy DeVos wants to get rid of an Obama-era policy that sought to end racial disparities in school suspensions and expulsions. Statistics show those disparities mean black students are four times more likely to be suspended than white students and two-thirds of black males will be suspended at some point during their K-12 careers.

Even if DeVos does scrap the policy that sought to end racial disparities, schools can still end the disparities on their own.

To do that, schools must first rethink the way they carry out school discipline. Instead of kicking students out, schools can take a positive youth development approach.

The young people and school leaders who spoke with my team and me at the Boston University-based Center for Promise recently for “Disciplined and Disconnected,” called for the same approach.

I study ways to create conditions children and adolescents need to thrive academically and socially, and as employees and citizens. The Center for Promise, which I head, is a research center for America’s Promise Alliance, a nonprofit that convenes people and organizations to help young people thrive.

Just as prior research has shown, the young people we spoke with stressed the need for school teachers and staff to get to know them and the reasons behind their behaviors. As one student in our study said, “All you got to do is to get suspended one time and you’re labeled. I see it, like they follow the same kids around, like everybody knows, ‘Hey, those are the bad kids…‘ Every time something happen, they either go to them or they [c]ome to me and [my friend] and be like, ‘You know what happened?’”

School leaders spoke about the need to change the cultural norms in schools from punitive to positive. As one school administrator in our study stated, “For us, it’s about keeping kids in school, keeping kids connected. Because we all know the research: the more connected a kid is, the better they do.”

That kind of change, however, is less likely if a school safety commission headed by DeVos has its way. The commission wants to scrap the Obama-era guidance that asked schools to keep track of racial disparities in school discipline. Without such guidance to raise awareness of how exclusionary discipline is implemented, research suggests that schools will disproportionately punish students of color.

The school safety commission headed by DeVos was formed in response to the Parkland school shooting. There is no data to suggest that students of color are more likely to perpetrate school shootings, especially mass school shootings. Still, the commission seems to believe getting rid of the Obama-era policy memo meant to reduce racial disparities in school suspensions and expulsions will somehow reduce school violence, which is its primary charge.

At first blush, this seems to make little sense, but here’s how their thinking goes: Earlier this year, conservative leaders called for Secretary DeVos to rescind the Obama-era memo. They argued that it has made schools less safe by keeping dangerous students in school.

But experience and research shows that kids with problematic behavior don’t have to be removed from school to keep schools safe. Instead, there are very promising and proven alternatives that can lead to safer schools, improved behaviors for individual students, and more positive school climates. My research shows the key is to make sure these alternatives are implemented with the right support for teachers and school administrators.

Exclusionary disciplinary practices – that is, suspensions and expulsions – on the other hand, can create divisions between students and teachers. They also place educational attainment further out of reach for students of color and students with disabilities, who are suspended more frequently than other students.

Indeed, the consequences of being suspended extend far beyond missing a few days of school. A 2014 study from the Everyone Graduates Center at Johns Hopkins University found that a single suspension doubles the odds that a student would drop out of school.

Alternatives to kicking kids out

Fortunately, more schools have begun to implement practices that may actually improve student behavior without removing students from the classroom. These are practices that could begin to give teachers hope that there are effective tools to maintain productive learning environments, even amid recent district-wide bans on suspensions, such as in Los Angeles and Philadelphia. In these districts, teachers are pushing back against these bans because they are not being given enough professional development and school resources to effectively implement effective, alternative practices. Armed with the right tools, proper training, and school administration buy-in, schools can confidently begin to move away from using the blunt instrument of suspension in favor of practices that engage all students in safe, supportive and healthy learning environments.

At their core, these practices help schools rethink discipline by rethinking young people: from problems to be remediated to assets to be supported. Punishment is not seen as separate from the rest of the learning environment, but as part of the overall school climate. Two illustrative examples are restorative practices and the Building Assets, Reducing Risks program, or BARR.

Restorative practices, often referred to as restorative justice, involves getting school teachers, staff and students together to identify and understand the harm done. These approaches are meant to resolve the impacts of the behavior on other students and the broader school through appropriate reparations or reconciliations. They also involve the repair of any relationships that have been disrupted. California, Colorado, Pennsylvania and individual districts throughout the country have implemented restorative practices.

Teachers can still remove students from classrooms for dangerous behaviors when using restorative justice. However, the removal is not a punishment, but rather a first step in understanding the reasons for the behavior and helping the student understand the impact of their behavior on themselves and others.

Significant focus is placed on how the student brought back to class after the issues have been resolved. Studies have found that restorative justice leads to improved student-teacher relationships, improved student behavior, and a reduction in suspensions, particularly for students of color.

In Denver, for instance, where restorative justice had been introduced in 2003, suspension rates for black students fell from 17.61 percent in the 2006-2007 school year to 10.42 percent six years later.

Since disciplinary alternatives are part of the learning experience, the impacts should go beyond suspension rates and should consider the learning environment for all students in a school. In Denver, students attending schools that have done a good job implementing restorative practices show improved rates of attendance and courses passed.

A more proactive approach, the Building Assets, Reducing Risks, or BARR program, focuses on building relationships between students and teachers that include mutual trust, respect and understanding of their respective lives — not on creating punitive policies. Developed at one high school outside Minneapolis, BARR is currently in 84 schools throughout the country.

BARR programs create structured activities for students and teachers to build positive relationships and set aside time for teachers to reflect on their students. BARR programs also call for continuous data collection on student strengths – such as motivation, empathy and social competence – and challenges faced by students – such as homelessness, learning differences and food instability.