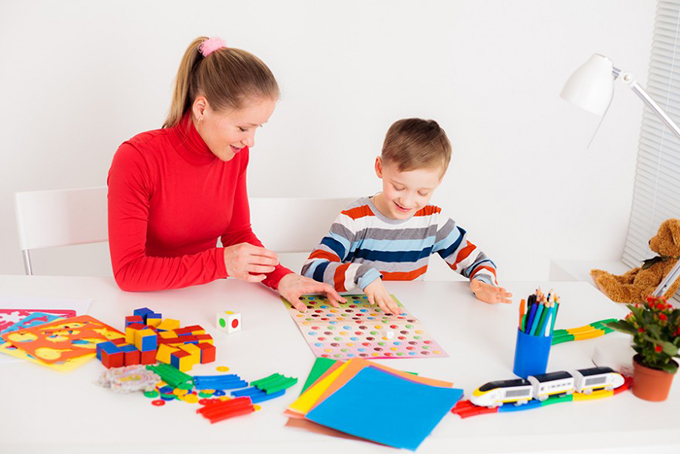 The lives of children in XXI th  century is very different – and more complex, add some – that she could be in previous eras. But, if there is one thing that does not change, it is good that children love to play and that this activity remains one of the most effective ways for them to learn during the first years of their lives.

In the scenarios they develop, children are imaginative, creative, problematic and problem-solving in motivating contexts that make sense to them. While quality early childhood programs are increasingly reserving time for free play sessions , parents are also determined to go in this direction, by focusing on various educational games.

That said, who has never seen a child having fun with the packaging of the gift that we just made him, rather than the game that is there? And the baby boomers remember those bits of wood they were turning into magic wands and old sheets that they were collecting to create sets.

So this embarrassment of choice, characteristic of XXI th  century, can he go with the belief that the game is by definition “educational”? Catalogs and websites urge parents to take an interest in these games, which would be beneficial for the cognitive development of their child and supposedly respect their creativity .

There is generally no evidence to support these kinds of allegations and it turns out that these games, which are very expensive, are often limited in scope, unless the parents help their children to use them properly. In many cases, they are linked to franchises (Disney, Pixar) that are primarily concerned with promoting their products more than whether they have educational value.

Take the example of this online magazine presenting the fourteen most effective games to stimulate the brain of toddlers, develop their skills and their reasoning. Among them, there is a caterpillar with a string to pull , presented as a game “stimulating for the imagination, able to entertain children for hours.” Without saying more, however, about the possible scenarios, beyond wandering this caterpillar.

Another example is the puzzle of the robot , designed in a good-quality, colorful wood, which pretends to teach children to associate images – from three simple shapes. It is very likely that this goal is achieved, but the price to pay for this result is a bit high.

The educational value of games is essentially the interaction of parents with their children, their questions, information they can pass on robots or caterpillars – in this case – and the consideration they will awaken, to from there, for the real insects, presented as part of their daily environment.

The awards gaming “Games of the Year” provide an overview of the games that are considered the best in the industry. During the “Toy of the Year Awards” (ndlr: awarded in the United States, “Toy Oscars”, in a way), GoldieBlox and its loom were awarded in 2014 in two of the fifteen categories, those of ” “Public Choice” and “Educational Game of the Year” – a game designed to “help children develop specific knowledge or skills”.

It is also a pleasant surprise to see that the game’s publishing company aims to “inspire the next generation of female engineers”. Here is what we read on his site:

The prize also included a separate category for boys, another for girls, which was awarded respectively to an ugly and nasty Moi figurine and to rainbow loom elastic bands (also offered by GoldieBlox). The first is taken from a film franchise, it does not offer many other opportunities for children to replay scenes with characters already defined characters.

Thus, while there are inspiring societies in support of feminism, there is also an overabundance of franchise-related games that not only maintain the traditional roles of both sexes, but also set limits to the creativity of the child. They can not therefore be considered as educational.

Parents and educators must not believe that it is enough to offer a game to the child so that learning can be done spontaneously. The role of adults in the game environment is crucial.

It is important to realize that younger children need time to explore the world and to play, and to understand that accompanying them in these activities is not only an opportunity to communicate in a more sympathetic context. It is also a stepping stone to help them express themselves better and understand their environment better.

Many parents seem to buy games and educational materials to entertain and educate their children, while occupying them while they spend time on other activities. It can work when it comes to quality games, of course. But do not forget that moments of shared games are opportunities to guide your child in his explorations and to give him a vocabulary that he can use in other contexts.

Play is part of the role of parents who want to provide the best possible learning environment for their children. They can arouse their curiosity from the youngest by asking them a series of simple questions: “What is it? What does the character do? What color is it? “Can you show me …” “Can you tell me how much …? They should also ask questions like, “What do you think will happen if …? “,” Can you think of another way to build / open / create …? “

Such interactions not only allow children to identify and situate things, but also put them in situations where they can think, suggest and test ideas without risk.

As we approach Christmas, the biggest season of buying toys of the year, parents also cultivate their own creativity, relearn to play, and most importantly, support their children’s discoveries in the future. not hesitating to ask them questions during the activities. The educational potential of games depends more on how they are used than on the label on their packaging.