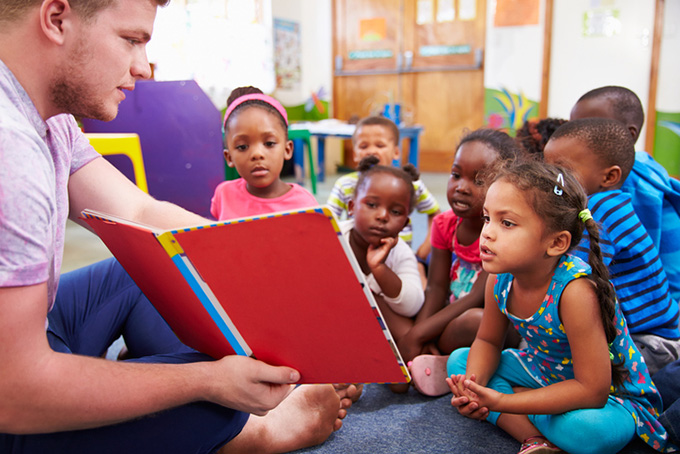 The mix of professions is changing slowly and is first observed in the executive professions and highly qualified people; thus, 20% of engineers and technical company managers were women in 2008.

Contrary to this movement, the early childhood sector remains highly feminized, with only 2% to 4% of men in crèche and 10% in kindergarten. This is also the case for the service sector, as well as low-skilled jobs falling under the care, cure, clean triptych , ie the professions of personal service, care and housekeeping.

Despite the European objectives in favor of greater professional diversity, the entry of men into kindergarten or crèche therefore remains discreet and deserves our attention if we want to understand the brakes and obstacles. Among these, we must reckon with the weight of a patriarchal heritage , assigning women to the role of mothering and men to remunerative occupations and power.

Many are satisfied with this state of affairs considering that it is in the order of things, by which we mean in the established order of genres where each sex should be in an unequal place which would be defined by tradition and nature.

Others want a society that is more open to complementarity between the sexes, understood as an asset in the gendered division of labor within mixed professional collectives: the “natural” qualities of each and everyone enriching the collective, men being able to bring their tastes and skills in computers or in certain sports activities for example, and women deploy their mothering skills.

In the name of the egalitarian principle and with reference to human rights , the right to freedom and democracy, still others seek to invent a new society, where the distinction between men and women is no longer a valid benchmark for distinguishing types of tasks or workstations.

As we can see, the relevance of the question is not self-evident for everyone and the way to establish its aim is not always shared with regard to the principle of equality.

While professional diversity in all sectors is encouraged by public policies and considered as a lever for advancing gender equality, the aim here is to assess whether these men working in a feminized sector, early childhood in this case, lean more towards an egalitarian belief. This survey is part of a large research program, MIXPRIM .

The results of our survey are based on the analysis of 75 biographical interviews conducted with men working in nursery or kindergarten. Their sociological profile reveals plural masculinities, less confined to injunctions to virility. Their family socialization was open enough to allow them to move towards early childhood.

For the youngest, who immediately chose a training course to access these professions, this is a way of succeeding. For older people who have reconverted, this sector represents a way out of more typically “male” trades, considered harder and more competitive, such as construction, commerce or engineering. They say they find a haven of peace there, a childlike universe where they appreciate the human relationship and the “care”.

Given these characteristics which are more open to the progress of equality between the sexes, and because of a very favorable national and European political context, one could expect to observe a real evolution in the attitudes and discourse of these men. If this is partly true, their ways of experiencing work situations remain prisoners of gender stereotypes. For example, it is not uncommon to still encounter derogatory judgments such as: “A nativity scene is a nest of vipers! When you’re a man, all these little things go over your head. »

Moreover, the masculine horizon is that of the “natural” complementarity between the sexes: their reflection unfolds from very split representations of gender conceived in the dichotomous mode of man/woman. Physical strength, the manifestations of authority are often called upon as so many natural assets of men: “The fact that he is a male director can make things easier with the parents because here he is a man, he can to be mean “.

Representations shared by their female colleagues who welcome them with open arms: “During a replacement in a crèche, I was told: a man at last! You will be able to shout very loudly to make the children calm down. “The balance between the sexes represents an ideal to achieve: “In my class, it’s a bit like a couple, we reproduce the family model dad-mom. »

This also makes it possible to justify the entry of men into these professions according to a posture of repair of what would be harmful to children, such as single-parent families. A debonair paternalism that does not prevent these men from saying they are in favor of equality between the sexes and from being steeped in good intentions. “We as men, we have this role of regulator, let’s say”; “Diversity avoids the stories of good wives. With a man we laugh more. »

Thus, men promote diversity but they do so on the basis of complementarity and not of equality, in other words they have an interest in demonstrating that they bring specifically masculine skills and “qualities” that early childhood needs.

They benefit from good opportunities to rapidly access managerial positions, thus reproducing the gendered hierarchy of higher statuses for men. This is what Christine L. Williams of the University of Texas calls “the glass escalator” as opposed to the “glass ceiling” which blocks the ascending careers of women towards positions of responsibility.

Without institutional support or specific team training, they explore with their female colleagues, as helpless as they are, a new mixed universe of work with old frameworks of thought, and try to tinker with a professional practice still subject to social gender roles. As a result, this policy of diversity is not conducive to the development of professional equality.

As long as men enter crèche and kindergarten convinced that they bring specifically masculine skills and “qualities” that early childhood needs, education will remain stuck in the difference between the sexes within teams and as model referred to young children.

On the contrary, they should, like their female colleagues, be trained to be part of the heritage of the long pedagogical history of early childhood forged by the pioneers, in particular Pauline de Kergomard and Maria Montessori. And in the same way as women, contribute to an egalitarian education. In short, opening up early childhood to men is a good thing, but on the condition that it is accompanied by a solid training program in gender studies.

Author Bio: Sophie Devineau is University Professor in Sociology at the University of Rouen Normandy