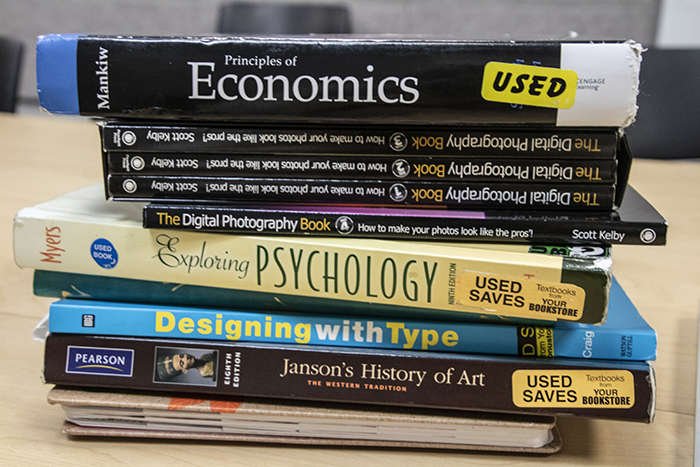 For some time now we have been observing a kind of renewal wave in education with emerging proposals that would turn classrooms and schools upside down, turning them into something almost unrecognizable. And, in parallel, we are seeing how digital technology has come to supplant the analog in many facets of life, also in education.

All this could predict, without more, that the textbook, not only in print, would be living its last rales, as an outdated, obsolete object, typical of other times: something old-fashioned. Deleting the book would seem like a triumph of pedagogical renewal. But there is something else.

In 2018, each non-university student spent 98 euros on textbooks, 12% less than in 2011, according to figures from the National Association of Publishers of books and teaching materials (ANELE). In the same period, the number of copies published had fallen more than 25%, especially those of Primary Education, which had been reduced by 35%, where the expenditure per student was highest (116 euros).

The data is more devastating for the sector when it is found that the textbook takes more than a third of the total turnover of books in Spain, an accurate 33%. On the other hand, in France , the figure is much lower: only 11% of the turnover corresponds to the school book.

And as for the digital book, which does not stop growing in the number of new titles every year, its weight in billing is just over 3% of all textbooks.

What is unquestionable is that in 2011 the sales of textbooks in Spain provided 868 million euros and that in 2018 it was reduced by 8.5%. Reasons would not be lacking, then, to fear the disappearance of the textbook, especially by authors, publishers, distributors and booksellers, as well as proofreaders, consultants and a long list of professionals. In short, if it was sold so much, it worked for something. 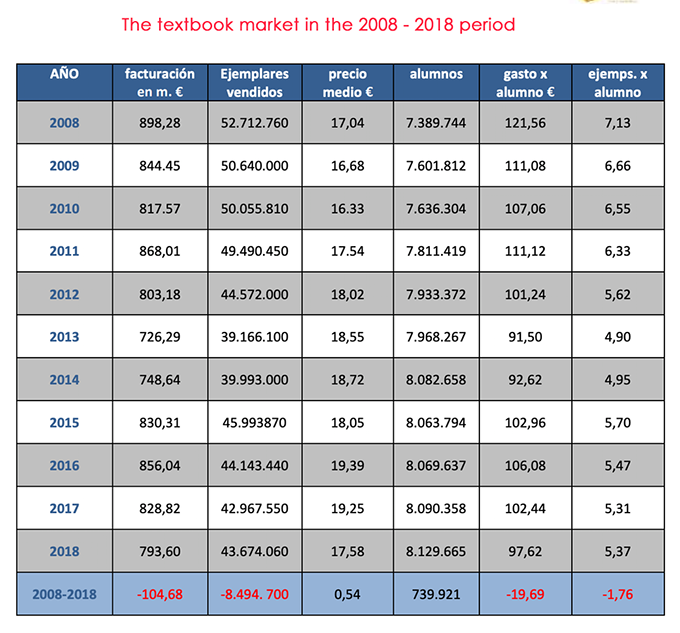 The teaching staff has used the textbook as the guiding thread of their work, where they found a program that maintained a certain epistemological and didactic logic: the contents were followed in an orderly manner, according to cognitive criteria, appropriate to the respective ages and curriculum organization; and the proposed activities responded more or less to an approach valued as optimal.

The “authority” of the paper book

The dose of “authority” provided by the book, virtually accepted by students and families, is not less; a kind of oracle used to arbitrate doubts: what the book put was almost sacred. The book thus supplemented the training needs of teachers or families, who came to remember that fact, concept or half-forgotten formula and that it was urgent to solve for the relief of all parties.

And it would not be less important that connective function, a link between school and families, which were knowing and following, through the textbook, the work that sons and daughters could be carrying out in class.

In this short list you cannot forget a clear aesthetic function, an added value, something more presentable than the shabby black and white photocopies, as an educational quality contribution. And, of course, an economic complement for teachers become authors who would have transported to the book some method or activities tested in class with their students.

It does not find its place in the new context

But the times are changing. The current educational market has become insatiable with emerging proposals that happen almost daily. The innovation causes a competition to offer the most original although that may involve losing the origins. And, in this context, the textbook does not find its place, an object with programmed obsolescence too linked to a gray pedagogy.

The textbook has an expiration date and that makes it attractive: the renewal required every four years, as established in the regulations, is opposed by a reality that extends its real validity for a few more years, which makes it somewhat worn out, casposo and lackluster.

Without innovation and creativity, repetition and plagiarism falls, but all this entails a little or nothing recognized economic cost. In addition, most families understand that the basket for educational materials is an expense and not an investment in the future, be they textbooks, digital whiteboards, cardstocks or plasticine.

If the textbook is expensive, it is no less the colossal work that the teaching teams must do to supply it in some way with a level of comparable quality, with good coordination, in untimely hours and through rather limited resources.

Thus, the measures of socialization of books and the change advocated by modern pedagogies have imposed other centers of gravity: interest is transferred from the content to the student.

What is to come

The book has ceased to be an object of worship, much less culture. It no longer deals, therefore, with registering personal memory, much less collective memory. The source of authority has changed hands. In fact, it has dispersed or, in the best of scenarios, has been concentrated in the teacher, the one who had never lost the confidence of students, families and colleagues.

Basically, accusing the textbook of preventing pedagogical renewal indicates that it has been understood rather little what that renewal means: it is not a matter of form but of substance; it is not about method but about purposes; education is not transformed by changing the color of furniture but the attitude of teachers, students and families.

Surely, in a context of uncertainties and few consistencies, we assist in the configuration of a polyphonic educational model, with diverse voices and supports, where the book could have a subsidiary function of the teaching work, within a repertoire of materials organized from a pattern didactic more or less defined by teaching teams.

The challenge, for the textbook, is to adapt to the winds that arrive. Otherwise, we may have to prepare, sooner or later, a funeral worthy of an object that, with its supporters and detractors, has fulfilled its functions with some dignity.

Author Bio: Enric Prats is Professor of Pedagogy at the University of Barcelona