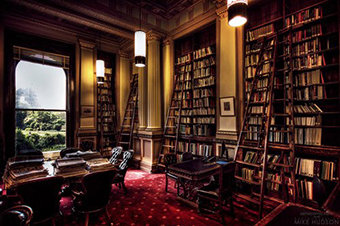 Like Shakespeare, Charles Dickens liked to invent new words. Along with flummox, abuzz, and whiz-bang, he is also often credited with ‘the growlery’, which he mentioned in passing in Bleak House. There is some debate about whether this word is his creation, and most dictionaries suggest it is an archaic term he adopted but that it’s no longer in use.

Now, like more than a few others, I’m a bit put out by the idea that the term growlery isn’t useful any more. I happen to think it’s a very helpful word.

It’s an evocative word and I usually associate it with a Dickens-type figure clad in Victorian best harrumphing while pacing up and down in a dimly lit, book lined, leather furniture filled study. I’m sure you can summon up your own image of the growlery and its grumpy inhabitant.

I realised recently however, that my blog is my growlery. It’s where I go when I feel exasperated, when I have the irrits. I’ve learnt to turn at least some of that annoyance into writing.

I write some blog posts when I am ticked off, when I want to ‘get something off my chest’ to summon up a cliche. A growlery post pretty well always results from something which has set me off in a tiny academic pique. It’s usually something I’ve just heard or read. The recent post I wrote on bibliographies and reference lists  was written in the growlery. As was the one on methodology and methods. And the one on Profzilla. Actually, when I think about it, there’s quite a lot of posts that begin in the sanctum of the scholarly growlery.

Of course, there are some things that are growlery material that I don’t blog about. One of those is when the target of my curmudgeonly prose would be too obvious and recognisable. I do try to avoid naming and shaming and ritual public humiliation. Blog ethics are much the same as any other kind of writing ethics – no slander, no unnecessary and obvious finger-pointing.

But the blog as growlery can be a pretty productive place. The growlery doesn’t have to be somewhere that you just go to stew or feel annoyed. You might start off feeling prickly and waspish, tetchy and touchy, disagreeable and surly. But then there is the possibility of turning that peeve into something more constructive, humorous, an answering back or the posing of a tricky question… Having a growlery blog makes this possible. Writing a post provides a route through the grouchiness. A retreat to privately rant just morphs into a writing retreat.

Publishing the growlery post is the equivalent of closing the door on that dimly lit, book lined, leather furniture filled room. You’ve had your disgruntled moment. And, at least on some occasions you’ve managed, via blogging, to turn the ill temper to good use.

So… Not yet a regular blogger and more than a bit churlish about an event, a policy,  a taken for granted assumption, the latest trend in scholarship? In that case, get thee to the growlery and let the steam emanating from your ears slowly consolidate into a blog post.