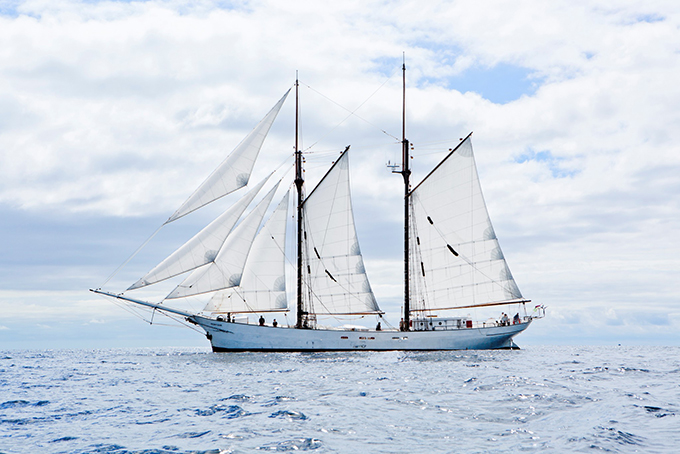 The whole world is in lockdown. And so is mine. But I’m not confined to four walls. I’m stuck at sea.

Since late February, I’ve been aboard the Avontuur, a schooner that transports cargo under sail. I joined the vessel to research the revival of such sailing cargo vessels in an attempt to decarbonise the massively polluting maritime cargo transport industry.

This journey should have been a three-week trip across the Atlantic from Santa Cruz in Tenerife to Marie-Galante in the French Antilles. A passage from Spain to France, but with the Atlantic Ocean in between. It all worked out rather differently.

Within 24 hours of departing from Tenerife, we came upon the Marie, a small vessel in distress with 16 refugees aboard. They told us they had left Laayoune, in Western Sahara, 10 days prior. They were without food, water, a reliable engine or any means of navigation. We took these refugees, who came from all over West Africa, on board. We gave them food, water and first aid until the Spanish Coast Guard arrived to take them over from us.

Afterwards, we spent a day anchored in Puerto Mogán on Gran Canaria to get our bearings and set sail again. Before we completed our ocean crossing, we received news from Timbercoast, the German shipping company operating the vessel. “Dramatic times!” the ship’s owner wrote. “You will not find the world the way it was before you set sail from Gran Canaria!”

The world had changed indeed. In Santa Cruz, we had been in port during carnival – reportedly the biggest in the world after Rio de Janeiro’s. These festivities took place without any restrictions. In Puerto Mogán, beaches were busy and tourists were ambling about. All that had changed by the time we arrived in Point-à-Pitre in Guadeloupe. We were denied anchorage off Marie-Galante, where we were supposed to take a cargo of rum. And, for a while, it looked like we’d be denied permission to come alongside, or even anchor, anywhere in the Antilles.

The risk of Covid-19 spreading to the vessel seems rather low. But if it does, the implications could be severe. We have no hospitals nearby, and the only medically trained person aboard is the captain. Indeed, I have never found jokes about my being the “useless” kind of doctor less funny or more apt than here and now.

More worryingly, if anyone aboard contracted Covid-19, we would certainly be denied entry to any port, and likely also any territorial waters. As well as putting everyone else on board at risk, it would also compromise cargo operations (including the viability of the shipping company) and provisions (we have a water maker and dry food stores on board, but fresh food spoils quickly at sea).

We are preparing to sail from Mexico to the Azores, without calling anywhere on the way. This could take anything from five to nine weeks, depending on the weather in the temperamental North Atlantic. And after taking provisions in Horta, we will have another three to five weeks of sailing before reaching Hamburg, from where I hope to return home.

Now that’s what I call a lockdown. But it is also research, and I imagine that I am one of precious few academics currently allowed to conduct fieldwork that is not related to Covid-19. Moreover, my lockdown comes with tremendous views, plenty of fresh air and great company. We still socialise, work and swim together without restraint.

It is all a far cry from what life on shore must be like. Grasping the ways in which life on dry land has changed is difficult. We hear very little news, and what we do hear comes from the shipowner via a very expensive satellite connection. When we are near land, we have limited internet access to speak to family and friends – some of whom are sick – but little time or bandwidth remains to read up on the news.

Perhaps life ashore will have returned to “normal” by the time we arrive in Hamburg, from where I hope to fly home to Melbourne, so I might never know what land life during lockdown was like. But probably life ashore will be rather different than when I set sail.

I think the biggest shock may come when I realise, once back ashore, just how much social norms have shifted. I should probably hold off on handshakes and hugs, but what else has changed?

Author Bio: Christiaan De Beukelaer is a senior lecturer in cultural policy in the School of Culture and Communication at the University of Melbourne