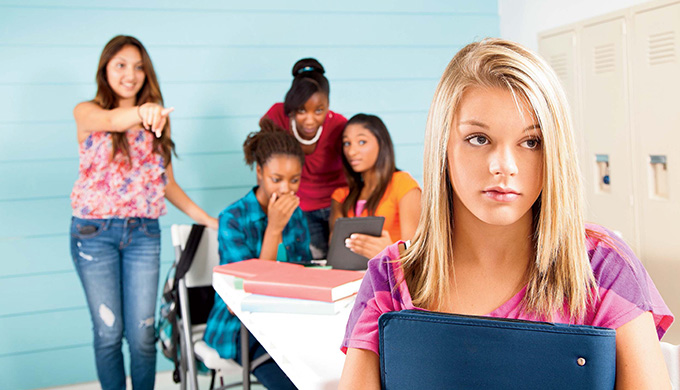 Bullying is a problem for schools worldwide. It is a fairly common behaviour, although it can be difficult to identify the number of young people who have been bullied because of the different ways bullying is measured. One 2014 review of 80 studies suggests that roughly 35% of children experience bullying at some point. In a class of 30 students, this would mean that ten young people will have been a victim of bullying. Childline reports that bullying is one of the top three reasons young people contact them.

Bullying is generally thought of as an intentional, harmful behaviour which is carried out repeatedly. The repetitive nature distinguishes bullying from other forms of conflict or aggression among young people. There are four main types of bullying behaviours: physical, verbal, cyber and relational (or social).

Relational bullying is probably the least known form of bullying. But it is also one of the most common forms, and can have more damaging effects than the other, better known forms of bullying. Relational bullying causes harm by destroying an individual’s peer relationships and social status. It could involve social exclusion: not inviting peers to take part in activities, for example, or spreading rumours and embarrassing information.

This type of bullying is sometimes called indirect, social or emotional bullying. While there may be subtle differences, overall it is accepted that they refer to the same types of bullying behaviour.

Since the 1970s, when psychologist Dan Olweus first established the field of bullying research, much evidence has shown that bullying in schools can have very harmful effects.

The detrimental outcomes of bullying have been identified across the globe. Longitudinal research has demonstrated that these negative results can last into adulthood, with effects that include depression and anxiety. We often focus on the person who is being bullied, but research has also shown bullies are more likely to report negative outcomes in later life.

With the exception of cyberbullying, the different forms of bullying are often studied together. Cyberbullying emerged more recently, and has seen a lot of attention as researchers try to establish how it differs from the more traditional forms of bullying.

In particular, we wanted to see what kind of relationship there was between relational bullying and health-related quality of life, while also considering physical and verbal bullying. Health-related quality of life is a broader measure of a young person’s well-being which covers their physical, emotional, social and behavioural functioning. It fits with the broader World Health Organization definition of health, which states that health is not simply the absence of an illness.

We found that relational bullying is associated with lower health-related quality of life, and appears to have a larger influence than physical or verbal bullying – almost double that for verbal bullying. We also considered gender, and found the findings were the same for both boys and girls.

How to spot it

We have come a long way since bullying was viewed as just an unavoidable part of life, a rite of passage during your school years. We now have access to numerous charities aimed at providing support for those young people who are being bullied, for their parents, and advice for schools. There are a number of well-established, evidence-based interventions, and UK law specifies state schools must have anti-bullying policies in place. And these efforts aren’t in vain, with small decreases in bullying prevalence noted across 11 countries.

But are we thinking about relational bullying when we talk about anti-bullying? Teachers have demonstrated that they have less concern and are less likely to intervene in instances of relational bullying, while parents may not view social exclusion as bullying. Additionally, the UK government webpage does not include relational bullying behaviours in their definition.

Author Bio: Kayleigh Chester is a PhD Candidate at the University of Hertfordshire