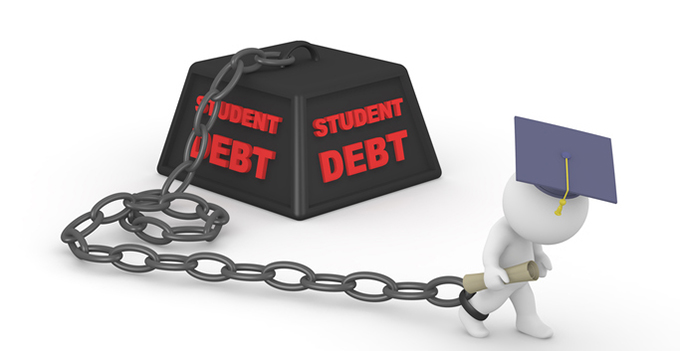 The vast majority of loans that students take on to go to college are federal student loans that carry set terms, are available to all comers, and have built-in protections in case things go wrong–like discharges available if the school closes before the borrower can graduate or if the student dies, and income-driven repayment options to help someone struggling to earn a living because their education didn’t pay off.

And then there are the others. Private student loans and institutional loans may help fill gaps in the cost of college that students or their parents couldn’t otherwise afford. Or they may wind up leaving students in the lurch, bearing huge debt loads they can’t afford to repay.

Consider ITT Tech, which offered its students short-term, interest-free loans from the institution that had to be repaid in full within nine months. When the students couldn’t repay those loans, the school told students to either drop out or pay back the first loan with its more expensive institutional loans (which carried 10 percent origination fees and interest rates as high as 16.25 percent, according to a CFPB lawsuit against the school). Even ITT executives expected that over 60 percent of those borrowers would default on their loans; but there were fringe benefits for the school, which could fake its way past certain accountability metrics. Or take Charlotte School of Law, which offered students no-interest loans to stay enrolled in the school after it was cut off from eligibility for federal loans. The students who accepted the loans wound up in the red when the school finally closed at the end of the year, unable to get their federal loans discharged if they finished their programs and holding thousands of dollars in private debt whether they finished or not.

Private student loans can also present a significant risk, and vary widely in the terms they offer to students. After a sharp decline in 2008, the scale of the private student loan market has found a new niche with the rise of refinancing companies like SoFi that convert federal loans to private ones after the borrower has left school. But the most concerning type of these private loans trap students in a cycle of debt. For instance, many private loans don’t give borrowers options to lower their payments if they’re struggling to make a living, like federal loans do. Other lenders won’t discharge the loans even if the student dies during repayment. And private loans, like federal ones, aren’t dischargeablein bankruptcy.

The latest data from the National Postsecondary Student Aid Survey (NPSAS) offer a sense, at least, of who is borrowing this private student loan debt–and how much they’re borrowing.

On the whole, the data show that private borrowing for college remains minimal. Just 5.5 percent borrowed private loans in the 2015-16 award year, with 2 percent borrowing solely private loans and 3.5 percent taking on both private and federal loans. And fewer than one percent of students borrowed institutional loans. High-income students were, on average, more likely to take on private debt than low-income students–good news, since low-income students are the least likely to be able to afford that debt and the most likely to need the protections offered by federal loans. But the lowest-income private loan borrowers were most likely to borrow that debt for nonprofit four-year and for-profit colleges, while the highest-income borrowers were primarily enrolled in nonprofits and public four-years, and far less likely to attend for-profit institutions.

For borrowers with institutional loans, they took on an average of almost $3,300 in those loans that year; and even among the lowest-income borrowers, borrowed about $3,000. Meanwhile, for students with private loans, the average amount of private debt borrowed was over $8,700 in the 2015-16 award year — a sizeable amount, particularly when you add it up over a college career. Especially concerning was that students who took out private student loans to pursue a certificate had more than $7,700 in private debt that year, on top of almost $3,500 in federal student loans–a very high sum for what might be a one-year program or shorter, which often have lower returns on investment than degree programs. In total, private student loans made up nearly half of those certificate borrowers’ total aid received (including grants), and about two-thirds of all their student loans.

In the for-profit sector, private student loan debt averaged more than $8,000 among borrowers who had those loans. And those with institutional loan debt had about $3,100 in debt from their schools. Even low-income private loan borrowers at for-profit colleges–those who received a Pell Grant–borrowed, on average, almost $7,000 in private debt; and low-income institutional loan borrowers took out $2,800 from their schools. At for-profit colleges, private loans made up more than 40 percent of all the aid, and almost 59 percent of all the debt, that Pell Grant recipients who took on private debt received, on average.

Given the relatively small share of private student loans in the outstanding portfolio of over a trillion dollars in student loan debt, it might be easy to dismiss those loans as a minor piece of the puzzle. That’s what the Education Department suggested earlier this year during negotiations on the gainful employment rule, when it said it plans to eliminate institutions’ reporting on private and institutional loans, exempting those kinds of debt from any accountability or transparency.

But private and institutional student loans add a sizeable burden to the debt loads of students who borrow them, especially presenting a major risk for the poorest borrowers. And college by college, that kind of debt is otherwise cloaked in secrecy–students have little transparency into what they might be expected to pay, how their peers are paying for it, and whether the total debt required to attend that college is reasonable or affordable. Given the sizeable share of debt private loans often present for the students who do take them on, the potential for unscrupulous institutions to manipulate the data on their programs by pushing students into non-federal loans, and the outsized risk that non-federal loans can present to borrowers, the numbers make clear that would be a mistake.