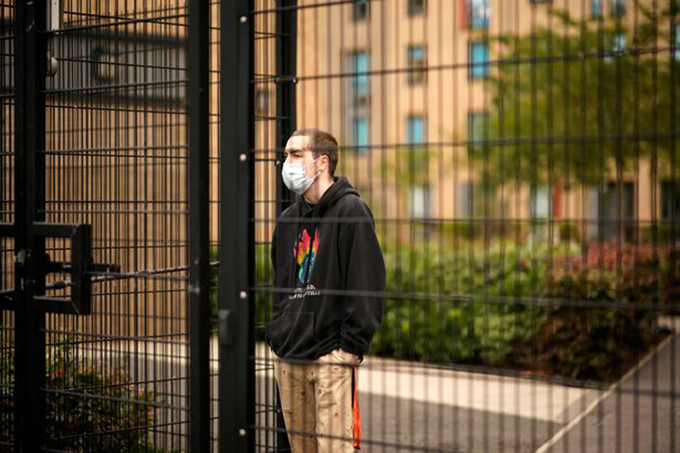 When my mates ask me how we university security guards prepared for the return of 15,000 students to campus during an ongoing pandemic, my answer is a strange one. We did it by removing a giant penis.

Our campus had been mothballed for four months and the local kids had sprayed the offending organ across our gate – possibly because it was the first time they’d ever seen it shut. My shiftmates and I erased their handiwork with a chisel one Sunday morning: the last quiet one I can remember.

It was definitely an unconventional freshers’ week. Ordinarily, guards would be running undergrads around in the minibus, advising them to save their last tenner for emergency cab money. But this year we’ve spent most of our time answering the phone in our guard room – or wiping it down between calls.

Why are students who are displaying symptoms self-isolating in shared kitchens, callers demand. Do families dropping freshers off on intake day count as visitors, which are currently banned? And if you order a Deliveroo, how do you collect it while you’re isolating in halls? Riders aren’t allowed past the gatehouse, and no one wants to eat tangy lemon chicken that’s spent the recommended 72 hours in quarantine.

These accusatory stories must have been written by people who have bad memories or deny how important it is for young people to engage with their peers when they’re in a strange town, cut off from friends and family. Still, I do worry slightly about what is to come. According to reports, guards at Manchester Metropolitan University are indeed doubling as bouncers, ensuring that anyone in quarantine doesn’t break their bubbles. As a licensed doorman, I’m crossing my fingers that I won’t be asked to do the same; I really didn’t join university security to jail teenagers.

But you can understand why #HMPMMU happened when you see students flouting social distancing measures. On the night shift, we’ve caught them wedging open the gates of their accommodation blocks to sneak in groups of visitors. Another incident saw us alerted to a “loud disturbance”; we followed the bass notes and caught 59 people in one flat. As soon as they clocked us – and our body-worn cameras – hoods flew up like surrender flags and everyone scattered.

The day shift is a slightly different beast. We’re issuing visors to teaching staff and encouraging everyone to log into the NHS contact-tracing app (but praying that their phones don’t start dinging like a Morse key). And sometimes we have to fold our arms sternly in the campus cafe and make sure customers remember to pull their masks up over their noses.

Among the sea of anxious faces, the ones I’m most concerned about are the new international students. Many are required to automatically quarantine, and – like home students with a high temperature or recurring cough – they qualify for food parcels, which we deliver. But the system is not without its perils. One poor lad arrived three days late but hadn’t notified us. On entering his room, he discovered that his complimentary bag of fresh produce had burst on his bed, which now looked like a Tracey Emin installation.

It was night but we managed to grab him a spare mattress and some blankets without disturbing anyone. Ninja housemaid powers are just a part of our skill set.

So far, there are only a couple of scenarios that really spook me. I keep imagining an anonymous tip-off about a student who has tested positive but is still attending seminars. I think that would fit the definition of a super-spreader and warrant a 999 call – though perhaps only after a thorough check to make sure the message isn’t part of a vendetta against the accused.

The other scenario is very real and has already happened right in front of me: a fresher coming apart at the notion of blended learning. The poor girl in question was distraught to find that all her modules had gone digital given that a power cut had just knocked out her wi-fi. We checked the distribution board and asked her tutor to make contact with her to ease her worries.

That was a particularly fraught evening because another student then came at me ranting that they’d been snubbed by McDonald’s staff for not wearing a mask. This was disgusting, they said. Mask or not, it was their right to be served; they’d paid £1.89 for a toffee latte.

The student was so wound up that I couldn’t tell them I was campus security, not the frying squad. I just stood there nodding like Susanna Reid, and then defaulted to my stock answer: “You’re an adult. I can’t tell you what to do. But I’ll tell you what I would do if it was me.”

Author Bio: George Bass is a security guard at a UK university.