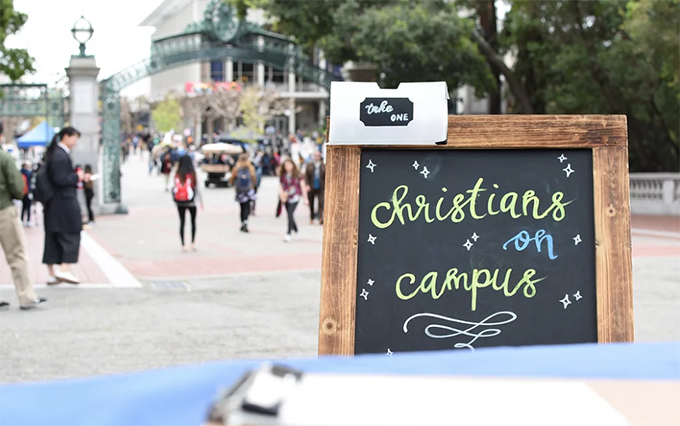 The culture of fear which encompasses many of our campuses is due to the ideological takeover—say the wrong thing, and it’s off to re-education camp. It’s been known for years that if you have conservative views, it’s best not to mention them until after tenure, which for many faculty means “never.”

It’s possible to keep your mouth shut and not talk about conservative ideas for years, but what happens if you happen to be part of another group converged campuses despise, Christians? Oh, you don’t need to wear a crucifix, you can avoid the death-sentence of proselytizing on campus, and with discipline you can keep your mouth shut when Jesus or Christian beliefs get besmirched…but some parts of Christianity are tough to hide.

Take down the crucifix (or two) in your home? Ok. Perhaps you can rationalize to co-workers why you’re putting your kids in private schools (you are an educator, after all). But what happens if you’re caught in the grocery store or eating out after church on Sunday? You’ll be caught dead to rights…and your career will be stunted.

Think I’m joking? A recent letter reinforces some things I’ve seen with my own eyeballs:

I know, a letter is simply an anecdote, but I feel the need to confirm the things this letter says:

…American academics with tenure who will not “stand up” against the SJWs.

While tenure is often presented as “job for life,” the protections from tenure aren’t that great—it basically means that if you’re fired (and you absolutely can be fired), you have the right to fight for ten years or more to get your job back. Not everyone has that kind of strength or wealth to spend. Of course, today tenure can be retroactively removed…it means nothing.

So no, tenured professors won’t speak out any more than the “temp” faculty. Yes, in theory, if all the faculty rose up simultaneously, perhaps it would work. Trouble is, admin controls hiring, and “spinelessness” is as much a part of the job description as “supports social justice,” has been for years. I’ve been on campuses where the bulk of the faculty were invertebrates…nobody is going to speak up for you if try to say something even so feeble as “it’s ok to be white.”

I wanted to assure you that there are many professors (tenured and not) in this country who are steadily taking positions informed by their Christian beliefs week in and week out. They know that in doing so they are gradually giving their administrations and coworkers a treasure-trove list that is updated, recorded, and hidden away in the faculty file record…

Again, I saw things in my “permanent record” as faculty at a scammy school (I was on good terms with the head secretary; she was fired for warning family away from the community college….so I got to see some things), yes, they really do keep a long-running record. When it’s time to get rid of you, you can bet things you said and did a decade or more ago will be brought up.

Granted, anyone following the news, where even a supreme court nominee has to answer for alleged things he did in high school, won’t find such a claim surprising.

If the rules suddenly change so that “having a Crucifix on display in your home” is now a hate crime, you better believe they’ll bring up mention of such in that file. I know, the gentle (and somewhat ignorant) reader might find this outlandish, but when one considers how much “our” culture has changed in even the last five years (try telling a “gay joke” today, for example), it’s no stretch to be concerned at these files, and what’s in them.

“…American academics could be doing more (as we all could) to speak up against the errant ideologies held by the SJWs.”

Errant ideologies? Errant! That’s bold talk. You better believe this is an anonymous letter. I’ve long since lost track of the number of pointedly anonymous complaints against what’s going on in higher ed today. I’ve had people laugh at the things I say because of my “ridiculous” pseudonym…but I do it in homage of all the anonymous complainers (CNN tracked down and threatened to have killed the guy who made a meme they didn’t like, in a matter of hours—not days!—so I have no illusions how well I’m protected by my public anonymity).

For what it’s worth, we (as parents) are not actively trying to encourage any of our three children (about the same ages as yours) to pursue academia as a way to support themselves or their families in adulthood…

Truly, one of the most damning indictments against an industry is when people in that industry do not wish to subject their children to it. I still remember the look of disgust on the Dean’s face when I suggested she send her children to the school she was Dean at…it was one of many hints that something was going far wrong in higher ed. Luckily, a “medical oops” killed my son before I would have to make the decision about if he should enter higher ed. I grant I probably would still do so, but I would watch over him very, very, closely when he did so, being careful to see he went to one of the few legit schools remaining.

…they need to have some kind of vocational training (electrician, plumber, etc…???) to fall back on when their Christian principles get them into “trouble.”

Christians, or various branches of such, have been targeted for oppression as much as (if not moreso than) any other religion, and have a strong tradition of being able to hide well (there’s even a well-hidden Christian culture in China, able to survive Mao). It’s no great stretch to believe Christians on campus are already going into hiding…it’s simply prudent behavior based on what we’ve seen in the last few years.