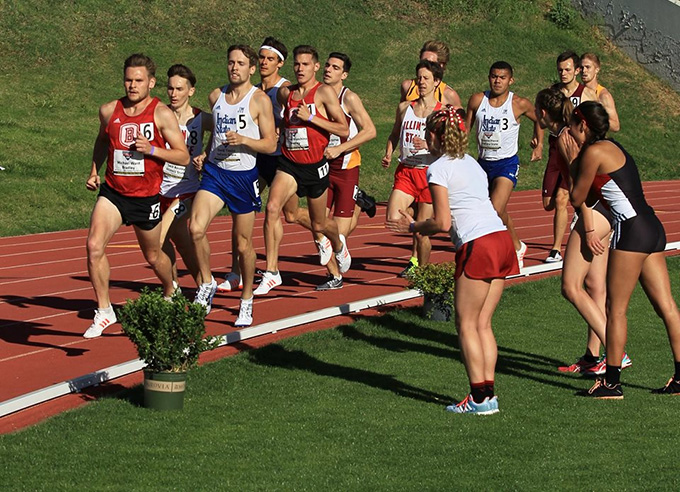 North Carolina Central University, a historically Black college, announced in February that its men’s baseball team – which formed in 1911 – would cease to exist after this season. The school’s athletic director called it “one of the most disappointing days in my career.” University leaders concluded that financial shortfalls due to COVID-19 were too much to support the team going forward.

Since COVID-19 emerged, dozens of colleges and universities have announced the elimination of different intercollegiate athletics teams. The vast majority of these cuts are at schools and teams that never show up on ESPN’s SportsCenter.

As professors who study higher education, we took a closer look at the 300 teams that were dropped between March and October 2020 by 78 colleges and universities.

It’s a diverse group of institutions. Some – like Stanford and Brown – have multibillion-dollar endowments. They compete in the NCAA’s Division I, which is the top level of college sports.

But the majority of closures came at regional and local campuses that participate in the NCAA’s Division II and Division III, or the National Association of Intercollegiate Athletics. Also, around 30 teams were eliminated by community colleges.

Regardless of campus differences, COVID-19’s financial consequences are a shared rationale cited by university leaders for the recent closures. The 78 schools we examined spend around $87 million a year to keep all those teams going.

The impact of shutting down college sports teams goes beyond an athletic department’s bottom line. Many in the sports world have focused on what it means for U.S. participation in the Olympics.

But there are other implications – positive as well as negative – for campuses themselves and how schools attract prospective students.

Last season was also the final one for the University of Alaska-Anchorage’s men’s hockey and women’s gymnastics programs. In September, UAA’s Board of Regents voted to shut down both teams as well as alpine skiing. A last-minute fundraising drive raised over US$600,000 to save the latter. 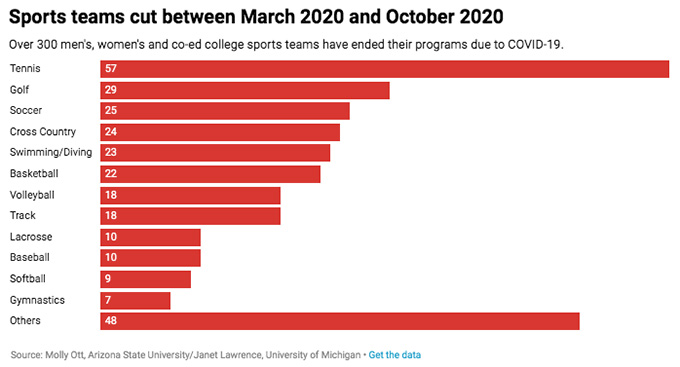 Most university administrators don’t expect their athletics programs to make a lot of money. Only about 25 of the 1,100 NCAA member schools’ athletics departments generate a profit. Institutions often spend far more money than their teams will earn from ticket sales, broadcasting contracts and the like. Higher ed leaders say sports provide entertainment and cultural value for students and the local community. Along with civic and performing arts activities, they liven up a campus.

Certain sports, like football, are also useful for cultivating donor and political relationships. A 2003 study found that public universities with NCAA Division I football teams received about 6% more in state funding annually than other institutions. And when those football teams win – especially against in-state rivals – state financial support goes up even more the next year.

Research also shows that having a varsity football program increases a school’s national visibility and status. Given this, we weren’t surprised that only four of the 300 teams eliminated between March and October were football.

Many colleges and universities depend on varsity sports – like rowing, track and swimming – to attract more students to attend. Athletes make up a sizable proportion of the general undergraduate population, especially at smaller schools. For example, NCAA Division III campuses enroll an average of 2,600 students, and one out of every four is a varsity athlete.

For the 300 teams in our analysis that were recently cut, 2018-19 federal data for each intercollegiate program indicates more than 5,400 athletes were members of those teams each year.

Most students who play college sports – including all of those at Division III and Ivy League programs – are not on an athletic scholarship.

So with fewer sports, the student body at some of these schools might change. For example, Stanford’s admissions office will no longer need to reserve 240 or so spots for accomplished fencers, field hockey and squash players, rowers, sailors, synchronized swimmers, men’s volleyball athletes and wrestlers.

Cutting those sports could open up new opportunities for applicants with different backgrounds, interests and achievements.

For students themselves, participating in varsity athletics is generally advantageous. Research shows that athletic talent improves an applicant’s chances of admission to top schools.

Playing sports can also help with the transition into college. An intercollegiate team provides a ready-made social group that can help the new team member adjust to their new school.

While the demands of big-time programs in men’s basketball and football can cause academic challenges for these students, studies have found that overall, athletes perform just as well in classes and have a higher likelihood of graduating compared to other students.

Research also shows that hiring managers value college sports experience. Some studies have found that former athletes have higher salaries and career success, on average, than other post-secondary graduates.

The full implications of the abrupt, unprecedented stop of intercollegiate athletics – and what it means for athletes, coaches, schools and beyond – is still unclear.

Eventually, “big-time” programs like Duke men’s basketball and Louisiana State University football will be back to business as usual. For many other schools, COVID-19’s effects will be more expansive and long-lasting.

[Deep knowledge, daily. Sign up for The Conversation’s newsletter.]

The financial savings for athletics departments are immediate and obvious. But a longer-term impact will be seen on enrollment, campus life and the communities where colleges are located.

Being a team member in a sport that doesn’t draw thousands of spectators or bring in millions of dollars still builds special connections to campuses that can foster institutional giving and enhance the health and longevity of participants.