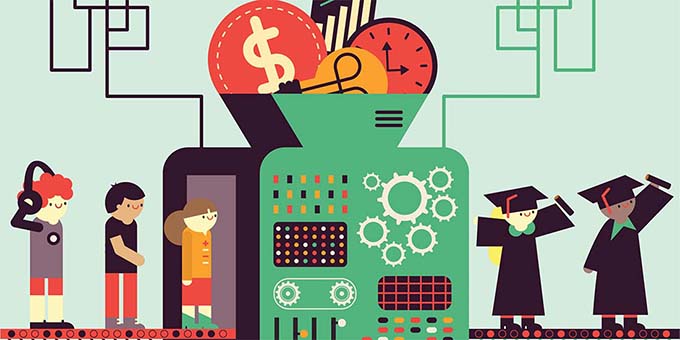 –typical promotion for a CC

Unlike universities, community colleges can spring up very quickly. You don’t need departments, you barely even need faculty. All you need are some administrators to hire cheap adjuncts, cut-and-paste the curriculum used at a nearby legitimate school…and you’re basically set.

This simple set up does allow for cost-cutting, and students are quite justified in expecting, and getting, lower prices for their courses and degrees. Of course, the savings here are illusory: the coursework often doesn’t transfer (some 80% of students are victimized like this), and even whole degrees from a community college can be of no value.

How can there be a savings when everything you get there is worthless? I’ve made this observation before, even documented it enough, but a recent article has a few things to add:

A Road to Nowhere

Many community colleges rely too much on associate degrees that have little labor market value and too rarely lead to a four-year credential, Ryan Craig argues.

It doesn’t take long to see the author here has thought about the kind of money being wasted on community colleges:

…the next time there’s a public event to celebrate the opening or expansion of a community college, it might make sense to bring both: cut the giant check with the giant scissors to signify the money being wasted.

I hope someday someone sits down and does the math on these things, as the money spent is extraordinary. I don’t know for sure, but it’s quite possible, if, in lieu of a CC, the community simply erected a mosquito breeding ground and paid the associated health costs of mosquito-borne diseases, that it would come out better off than the sheer waste of a community college.

What community colleges represent is clear. They were the first higher education institutions in the community at a time when four-year colleges and universities were inaccessible to all but a small segment of the population. As the first open-enrollment institutions, they revolutionized accessibility in an era before a college degree became the sine qua non of the labor market.

A big problem of what happened to higher ed was our “leadership” turned into plunderers. Yes, absolutely, there was a time in the not-too-distant past where community college represented a real opportunity to move ahead in a cheaper and more convenient way than going to university.

Our leaders plundered that reputation, and many CCs are now unhinged, with most of what goes on in the classrooms outright fraudulent, and the courses which honestly admit what they cover are 90% high school level or lower, and accreditation does nothing because they’re in on it. Meanwhile, the leaders rake in the loot as reward for “growth” of the school.

Employability is a huge problem for associate degrees. The more problematic associate programs are for students who don’t plan to end there; over 80 percent of students who enroll in associate programs at community college intend to transfer to four-year institutions. Of course, only 32 percent actually do within six years, and fewer than 15 percent earn a bachelor’s degree in that time frame. The trouble is transfer. A GAO report from last summer revealed that students who transfer lose 43 percent of credits they’ve earned, which means even more time for life to get in the way.

Goodness, such miserable percentages…how can any community think of a CC as a boon when the facts say otherwise?

Part of the problem of the useless of the CC degrees is from the core structure of the school: the faculty are irrelevant, being merely a collection of whoever admin can scrape together to serve administrative whims as cheaply as possible. How can there be a coherent degree program under such circumstances? It’s simply not possible, as any faculty with any standards are quickly removed…standards cut into growth.

Another trick CC’s use to make their communities think they’re a benefit are dual enrollment programs, i.e., programs where the high school students get college credit by going to the CC. Sounds great, right? How’s that work out?

Dual enrollment has the same fundamental challenge as free community college: It may be free, but where does it get you?

Again, if the credits don’t transfer, or at least transfer meaningfully, there’s no benefit to teaching the high school kids with adjuncts instead of high school teachers…well, beyond paying a bunch of CC admin $100,000 a year apiece to crow about how great they are.

I’m close to finishing up the first 50% of the brutal chemo that gives me a chance of survival…I can’t help but draw parallels between the futility of fighting this cancer for decades now and fighting the immense fraud of our typical community college system.

Yes, I know, someone will chirp in with “but CC really helped me out!” but much like with that one guy who actually recovers from cancer…it’s something of a fluke, and at some point we need to take a more realistic look at what we’re doing here, to see if we yet have the will to fix things.

Somehow, I suspect that time is not yet here.