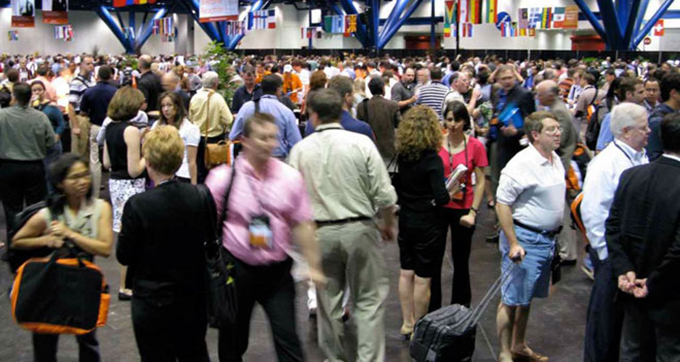 Making small talk with someone who’s just given a talk, whether at a conference or at a colloquium or invited talk, can feel intimidating, especially if you’re a student or early in your academic career. But as someone who’s currently spending a lot of time on the opposite side of that divide, I’ve realized that when I’m a speaker, I really really want people to come up and talk to me. So here’s your pep talk, and some tips on what to say.

The key thing to realize is that most of the time, you know more about the speaker than they know about you, so you need to start the conversation and you get to pick what it’s about.

Even before the talk, the speaker’s name and abstract has been emailed around the department or is in the conference booklet, and after the talk you’ve had somewhere between 20 minutes and an hour to hear them talk about what they’re interested in. If it’s a course, maybe you’ve even had weeks. Maybe you’ve googled them, maybe you’ve read their articles, maybe they’re your academic hero, maybe you just stumbled into the talk but now you find you’re enjoying it, whatever. You know something about them that makes them interesting to you.

The speaker, on the other hand, might not even know the names of anyone in the audience at all (at a conference) or might know only their one or two host(s) (at an invited talk). Or even if they know half the audience, if you’re one of the people they don’t know, then have no particular reason to want to talk with you. And even if they do have a general desire to meet people in their audience (and they probably do), all they have for small talk options with these unknown people are very general questions that can be asked of any linguist, like the classic academic icebreaker “So, what do you work on?” and its relatives “So, are you a student?” and “So, where are you from?” (Note that in an academic context, this means “What university(s) are you affiliated with?” and not “Where did you grow up?”)

Protip: if you’re new to academic conferences and want to seem like a srs linguist, make sure you have an answer to “So, what do you work on?” It’s acceptable to say “[phenomenon] in [language]” as a short answer, but it’s better to have a 30 second summary that gives the other person something more to hook onto, like “I’m looking at constructions like [Example McExampleface] in [language]. You might expect people to say [this thing], but in fact they say [other thing].” This gives them a couple of places to ask follow-up questions from if they’re interested. If someone gives you a “[phenomenon] in [language]” type answer though, a good way to continue the conversation is to ask “So what would that look like?/Do you have an example?/What have you been finding?”

“What do you work on?” is a perfectly acceptable academic icebreaker for standing around the reception desk / coffee table / buffet line, but if you’ve just seen someone’s talk you can’t ask them what they work on – they just told you! If you hover around silently long enough, they might ask you instead, but you run the risk of someone who does know how to talk with speakers starting a conversation first. Of course, if you’re not actually interested in the speaker, you can leave without chatting, but if you are, there are better options than hovering around silently! Here are some of them:

Unlike the question period, you don’t have to have a formal “question” about the particular talk in order to go up to the speaker and talk with them afterwards. So instead think about how to start a conversation that will be interesting and relevant for both you and the speaker. A good way to think about this of options is to think about why you came to the talk and what you got out of it:

It may feel self-promotional to go up to a speaker and say that you work on a similar area, but it’s actually a great idea, as long as you start with a quick version and let them ask questions as interested, don’t just jump right into an extended description. People do talks partly as a shortcut to networking – you could have a bunch of individual conversations with a roomful of people to see who has common research interests, or you could just give a talk and let them self-identify to you after. (Giving talks is, counter-intuitively, a great idea for introverts and socially awkward people! You get a defined role and a bunch of people wanting to start conversations with you about stuff you’re interested in.)

For example, I always want to hear from people who are working on internet language or public outreach projects, but same goes if you’re talking with a speaker about your mutual interest in split ergativity or Bantu languages or whatever. You’ll want to tailor this to what kind of conference you’re at though. If you’re at a big sociophonetics conference, it’s less interesting to come up to a speaker and say “I, like everyone else here, am a sociophonetician” than if you’re at a small general invited talk.

Here’s some more general tips, some of which are courtesy of twitter:

And some advice about what happens once you’ve started that conversation:

Anyone who’s been on either side of the speaker/audience divide want to chime in?

Author Bio: Gretchen McCulloch. Gretchen started blogging as a linguistics grad student at McGill University, but is now a full-time pop linguist, bridging the gap between linguistics and the general public.