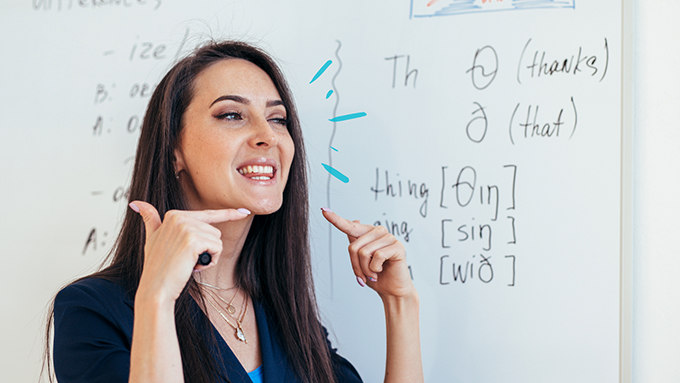 Despite the change in direction towards methodologies that prioritize interaction and communication for the teaching of foreign languages, we remain anchored and constrained in the paradigm of the use of a single language to teach that same language. Today we know that in human nature there is no room for compartmentalized languages ​​and that the limits that are drawn between them are social inventions .

Emotionally intelligent teachers understand this flow of resources and communication skills with the strategic use of their linguistic repertoire in the teaching of foreign languages, since it serves as a scaffold and as a tool that transmits security, closeness and flexibility in learning.

In Spain, the level of command of foreign languages ​​in general (and English in particular), although it has improved, is still our pending subject. And, perhaps, this is the handicap, that is, thinking about individualized subjects and not understanding the teaching-learning process, also of a foreign language, from transversality and interdisciplinarity.

The emotional intelligence helps us understand that bilingual and multilingual environments creativity is immanent in the flexible use of languages by all participants in the educational process, which favors a strong and meaningful learning.

Translingualism in the educational field

Practically half of the Spanish live in an autonomous community with more than one language ; To this must be added globalization, the trend towards internationalization through the learning of foreign languages, and the linguistic diversity of people residing in the Spanish territory from other countries with different cultural and linguistic contexts.

Why then turn your back on this linguistic reality assuming that it is detrimental to learning the main foreign language in Spain, such as English? In fact, the proliferation of bilingual educational centers is just another indication of the inherent benefits of the use of languages on a cognitive and emotional level.

Furthermore, it is sometimes the case that there are English students who know what they want to say, but who lose their voice in the classroom due to the influence of an imposed monolingualism that does not allow them to express themselves using their own linguistic and semiotic tools.

Importance of motivation and self-esteem

This is the last thing that university teachers, after-school educators or English teachers in the different stages of compulsory education can afford, being aware of the importance of motivation and self-esteem in learning any area, and of the foreign language. , English, especially.

Translingualism favors, therefore, the person who learns and what happens in his brain, while the simple exchange of languages ​​or what is called code-switching , prioritizes social evaluation from a perspective external to the learner.

It also offers an epistemologically different alternative that is based on the idiolect of each speaker, and offers the potential to expand and unleash all the linguistic and semiotic resources of the individual learner. The flexible use of languages ​​from an internal perspective of the participants is a practice, although not legitimized, common in educational centers and that occurs spontaneously in the flow of oral interaction.

This use of languages, together with active English teaching methodologies in which communication prevails, can be planned giving rise to a pedagogical translingualism that can be implemented in different educational stages and teaching cycles. Although apparently paradoxical, translingualism can go hand in hand with the protection and promotion of minority languages .

In education, translingualism is the acceptance that languages ​​can complement and be used together in the classroom rather than competing against each other. Teachers can strategically plan the use of two or more languages ​​for teaching.

There are various strategies to integrate translingualism in the classroom, one of which consists of alternating the language used for comprehension and the one that, once the input is processed , is used in the expression or output . The benefits of implementing translingualism are linked to general language development, English development, content learning, and social development.

As a dynamic and scaffolding tool, translingualism offers the opportunity to learn and grow while enjoying the intellectual and emotional benefits that the linguistic resources available to everyone.

Emotional intelligence and English as a foreign language

When we talk about teaching English as a foreign language (ILE), the problem of the different levels of mastery of the language in the same class or group comes into play, on the one hand, and the adaptation of tasks, dynamics and projects to the diversity of the student body, on the other hand. Inclusion is a fundamental aspect in the educational field, and in ILE it is no less so.

In this sense, the development of emotional intelligence and the teaching of ILE go hand in hand; However, the climate necessary for meaningful group interaction is not always instinctively produced, but must be fostered by trust-building techniques that create a positive classroom environment and foster cooperation.

In oral communication in English, affect helps the student speak and express their own experiences and feelings with confidence using relevant sentences and terms. Aspects such as greater exposure or the creation of immersion bubbles in the target language can be very successful approaches in certain contexts and educational stages.

However, the flexible, critical and creative use of what we call the mother tongue or other languages ​​within this unique repertoire in each subject, also contributes to creating the motivation and tranquility necessary in the acquisition of English, since the students have more linguistic tools or resources for making connections between ideas, structures, expressions or certain concepts.

Author Bio: Maite Amondarain Garrido is a Student / researcher of Doctorate in Education at UNIR – International University of La Rioja