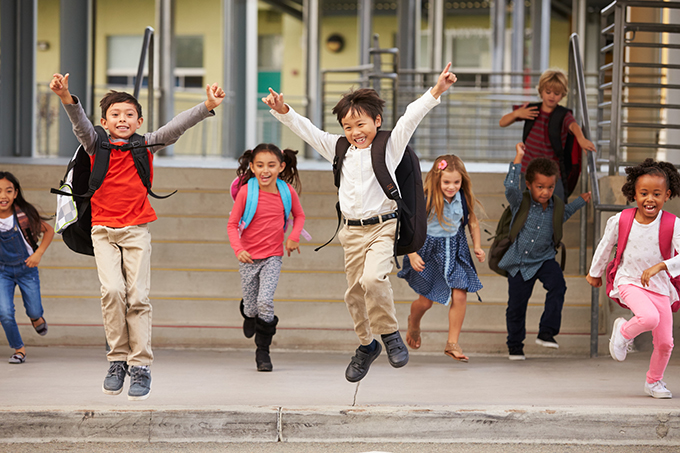 According to international comparisons conducted by the OECD , France is part of a quarter of the countries whose duration of the school year is the shortest, not exceeding 36 weeks, while the median is 38 weeks – and that one third of the countries is beyond 40 weeks). Only two countries have a school year shorter than that of France, or 35 weeks.

Does this mean that France grants more summer holidays to its students than other countries? In fact, with almost nine weeks of summer holidays, France is only average. For primary education, the length of the “big holidays” varies from single to double depending on the country: it is 13 or 12 weeks for 10 countries against 6 weeks in 5 countries.

The difference is thus played on holidays during the year, the other countries rarely having “small holidays” which exceed the week. A distribution that has organized over XX th  century. If the total duration of the holidays has not changed since the end of the third Republic, the calendar has changed a lot.

Are summer holidays a legacy of agricultural France? The trace of a time when children helped their families for harvest? In reality, the tempo that finally prevailed was that of secondary schools, which, however, received only two or three per cent of an age group under the Third Republic.

As historian Antoine Prost has shown , nobles should not “work”: it would have been “derogatory” to their rank. Hence, more often than not, a way of life alternating: in town, in their mansion, in the bad season; in the country, in their castle, during the beautiful season. In their turn, many bourgeois have sought to live nobly. To take holidays was to show that we were above the workers, that we were different from them.

Ultimately, in the XIX th  century, the children of the bourgeoisie and aristocracy – which then were practically the only ones to attend colleges and high schools – thus joined their families in the second half of the summer to participate, not the work of the fields, but social networks that were tied then especially around hunting (activity of noble origin, privilege, even, under the Old Regime).

Starting from the establishment of the Third Republic , the holidays of secondary education will begin earlier and earlier in the year, and last longer. In 1875 it was decided that they would begin on August 9th; then, from 1891 on  August 1st . In 1912, the beginning of the “great holidays” is advanced to July 14; but they always last until 1 st  of October. So we went from 1874 to 1912, from one and a half months of vacation to two and a half months.

The extension of two weeks will be for different reasons, and generalize. It is first granted as a reward (for teachers …). The decree of 27 July 1896 grants it to staff “who have contributed to the functioning of regular classes of adults and adolescents”. At the very end of the XIX th  century, a practice has created: the normal holiday period increased from six to eight weeks, as recognized by the decree of July 21, 1900.

In 1922, we add fifteen days to the month and a half of summer holidays. They range from 1 st  August to 30 September. In 1938, they are aligned with those of the secondary and fixed from July 15th to September 30th. It is the Popular Front. Paid leave often begins on July 14th. We thus instituted great holidays that go from July 15th to September 30th. “Children’s holidays and parents’ holidays must be brought into harmony,” said Jean Zay , Minister of National Education.

In 1959, the summer holidays are shifted a whole two weeks: they start earlier, on 1 st  July and end early, in mid – September. As the first trimester was lengthened, it is decided that 4 days will be released at All Saints’ Day so that there is a small cut.

Thirteen years later, in 1972, after the Olympic Winter Games in Grenoble, the winter holidays were instituted. And with them, zoning (A, B, C) to promote the development of tourism and traffic during large “transhumance” afferent.

From there, we enter the well-known issue of 7 + 2 (7 weeks of class followed by 2 weeks of vacation, a rhythm unanimously recommended by chronobiologists), but who knows many ups and downs.

Debate on the calendar

If it is necessary to lengthen the number of weeks “worked” to align with the median of the other countries which is 38 weeks against 36 for France, the best would be not to touch the small holidays of two weeks but of shorten the two week long vacation.

France is currently – and by far – the country where the number of “worked” days per year is the lowest, especially for municipalities that have chosen the four – day school week (instead of four and a half days) , and this can be considered an effective problem.

But the subject is very sensitive, even cleavage. Teachers are very reluctant, even for many of them very hostile to such an evolution, especially if there are no compensation, salary or other. French teachers are certainly among the teachers who have the most vacations; but they are also among the lowest paid.

“Whenever we talk about the child XXI th  century, we must ask the question of the summer holidays or intermediate vacation. This is a more important subject than the weekly rhythms.

On June 22, 2018 on Europe 1 , the minister reiterated: “it has been a long time since I say that we will have to ask quietly but surely the question of school holidays”.

Author Bio: Claude Lelièvre is a Teacher-researcher in history of education, honorary professor at Paris-Descartes at Paris Descartes University