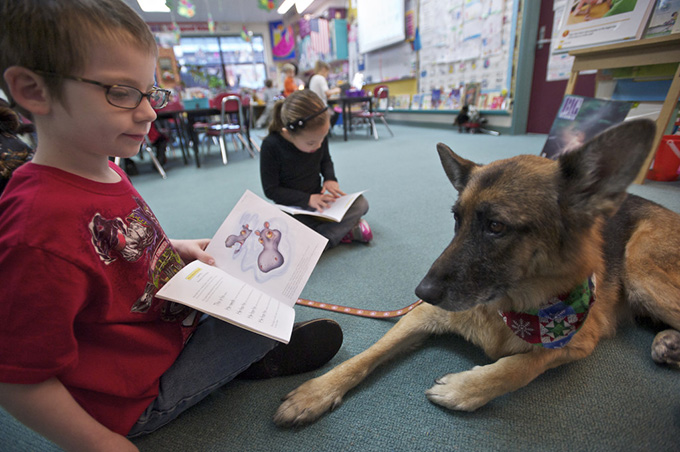 When you think about your own school days, you might have had a furry friend to keep you company in the classroom – maybe a school hamster, rabbit or guinea pig. But what about a school dog?

That’s what’s being suggested by the vice chancellor of the University of Buckingham, Sir Anthony Seldon, who made a speech at the university’s “Ultimate Wellbeing” conference promoting school dogs as “a powerfully cost-effective way … to improve mental health in our schools”. Also in attendance at the conference was Damian Hinds, UK education secretary, who spoke in support of bringing dogs into schools to enhance well-being and claimed every school should adopt one.

It might sound barking mad, but a school dog could be one way to help make schools a homelier environment as an antidote to the competitive and performance driven places they have become. It could also be a low-cost way of introducing a “therapeutic effect” which Aubrey Fine, a well respected expert in animal-assisted therapy, describes as the well-being benefits that arise simply from the presence of an animal. Getting dogs into schools, however, isn’t as simple as it sounds.

The idea that “every school needs a dog” is problematic. But an aversion to animals in schools distances children from unique, developmentally rich and life enhancing experiences. It is entirely possible for a dog to thrive in a school if the animal is not seen as a commodity but a community member – as advocated by the Dogs for Good charity.

Boris Levinson, a professor of psychology, suggested back in 1972 in his book Pets and Human Development that animals can help address “complex stresses created in a technological society whose values and institutions are in many ways dehumanising”. Levinson introduced the idea that the presence of an animal can be a “force” for enhancing children’s social and emotional skills and their capacity to relate to others on an emotional level.

Various education pioneers, including Rudolph Steiner, Maria Montessori and Susan Isaacs, have also described how animals bring children back to the rhythms and realities of the natural world.

That said, not everyone will be thrilled by the idea. There are those who are allergic, not a fan of animals or are even scared of dogs after a bad experience. There are also welfare concerns – specifically the potential for harm to animals, children and other people – and damage to property in the school is possible.

Animal welfare organisations like the Dogs Trust say that dogs should not be used in schools to mitigate the potential for harm and to protect the animals.

Alongside this, there are often (but not always) restrictive health and safety policies in a school preventing dogs on the premises. But none of these factors should overshadow the asset that a dog could be in school life.

A good starting point for any school leader interested in introducing a dog, who wants to understand the theory and recommendations, would be the new Code of Practice, which has been developed by a leading UK human-animal interaction organisation – The Society for Companion Animal Studies.

The person in charge of the dog should also have an appreciation of anthrozoological theory . This is the study of interactions between humans and other animals. They also should have undertaken appropriate training. The animal would need to be temperament checked by a professional animal behaviourist and will need training and ongoing support to be comfortable in the school environment – schools can be noisy places and children can be unpredictable.

Children and other adults in the school would also need to be briefed on acceptable interaction with the dog – with rules of engagement – certainly no pulling on its tail or chasing it around the playground.

Ultimately, though, a well selected and happy furry friend in school can help children in many ways – not just with well-being. It can help children be more motivated in their learning – specifically with reading.

It also makes them less likely to develop allergies. And for most children having a dog around is fun and enjoyable – it is something they can seek comfort from, learn about, a community talking point. A school dog also can be a fun teaching assistant to make the day more enjoyable – bringing a whole new meaning to the idea of a teacher’s pet.

Author Bio: Diahann Gallard is a Senior Lecturer in the School of Education at Liverpool John Moores University