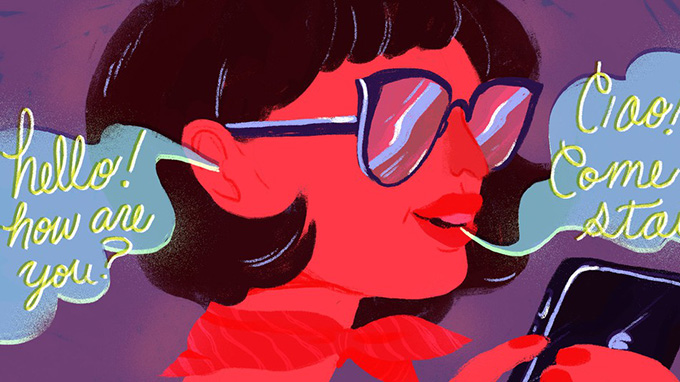 In 2018, the publication of a new study on learning a second language made a big splash in the British press. From the BBC to the Daily Mail , via the Guardian , a whole series of headlines have conveyed this depressing message: it would be impossible to be able to speak fluently a foreign language by beginning his apprenticeship after the age of about 10 years. All of these accounts actually distorted the findings of the study, misleading information.

On the one hand, the question of fluency in a language, or the ability to speak it fluently, never appears in the original study, published in the journal Cognition . There is a good reason for this: it is not what interests the authors of this research, nor indeed the other scientists working on foreign language learning.

To speak fluently another language means that you are able to communicate with relative ease, without creating any constraint for the speaker as for the listener. The President of the French Republic, Emmanuel Macron, is fluent in English, although it can be clearly discerned that it is not his native language, for example when he uses the word “delicious” instead of “delightful” .

Almost everyone is able to learn to speak almost any language, at almost any age. It is not even true that younger children learn languages faster than those who are a little older if you expose different age groups at the same volume of instruction in a foreign language, the older s ‘will always come out better, for their first steps, as in the long run.

Learners of all ages can acquire a brilliant command of the vocabulary of another language, almost of the level of a native, even when dealing with structures as complex as idioms or proverbs.

The question of a critical period

Concerning older learners, what is puzzling – as the authors of the new study also found – is that they seem to have more difficulty mastering certain grammatical functions.

A good example of these difficulties is the ending “s” which is added to the verbs conjugated in the third person of the singular: we say “I / you / we / they walk” but “he / she walks”. Many people learning English as a second language continue to err on this kind of relatively simple rules, even if they have an amazing vocabulary mastery.

However, it seems that if you are learning a younger language, you will find it easier to master the kind of structures that older learners struggle with; same for the acquisition of a good accent.

Linguists remain divided on why older speakers struggle to master certain grammar points. Some – including the authors of the study published in the Cognition journal subscribe to the so-called “critical window” hypothesis. They suggest that we have a special mechanism in our brain that applies exclusively to learning a language, and that this mechanism “goes out” around puberty – the age at which most speakers master their language. native language.

Other researchers argue that the slightly lagging performance of older learners does not stem from specifically linguistic skills . Rather, they suggest that this is because of the changing circumstances that occur when people move forward in their lives, such as having less time to learn, declining general learning and memorizing skills, or feeling identity more stable.

No break at 10 years

What is new in the Cognition study is that, in accordance with linguistic survey standards, it relies on a panel of data of unprecedented scale. Through a shared social media grammar quiz, the authors collected more than 700,000 responses, two-thirds of which were from people who speak English as their second language.

They found that the accuracy of the test responses declined sharply for learners who began learning English from the age of 17, far from the 10-year mark on which most of the stories came from. focused.

This is a new study and I think that in the future, many researchers will use such tools and collect much more data than we have been able to do so far. This will certainly inform and guide the scientific debate on the existence or not of a critical period. But the claim that this study suggests that we would be too old to learn a foreign language after the age of 10 is one of the most egregious misunderstandings I have ever seen about a scientific result.

The question of how and why grammatical rules are adopted in a second language has important implications for linguistic theory, but it has little consequence for the learner. You can become bilingual at any age, and small imperfections of grammar or accent only add a certain charm.

Learn a new language. Learn a new instrument. Get started in a new sport. Or do not do anything of it. But whatever your decision, do not put your age in question.

Author Bio: Monika Schmid is a Professor of Linguistics at the University of Essex