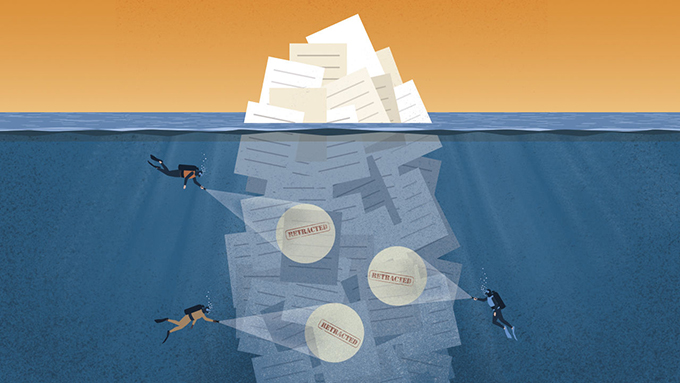 Our “peer review” system of publishing research is clearly highly flawed. In less objective fields like psychology, past half of such published research has been shown to be not reproducible. Some of this research has been foundational to psychology, such as the famous Stanford Prison Experiment…despite the fame, it’s a fraud.

In medicine, we also have this problem, and even wide swaths of cancer research are probably fraudulent. Of course, I have a front row seat to how unpredictable cancer can be.

Even hard sciences are obviously vulnerable, as shocking as that sounds. Today I’m looking at events at an electronics journal…surely peer review could check whether the research claims are valid? Perhaps not, but there’s something even more interesting here:

Violations of policies on peer review are cited, without saying what the violations were.

Ok, clearly they found a serious peer review policy violation here. If I were to conjecture, I would suppose that the “peers” reviewing the papers were a loaded bunch, possibly just one guy posing as a half dozen or more guys. That’s just a guess, and it doesn’t matter, the journal found violations and reacted appropriately.

For now, the IEEE said that “three volunteer editors identified during the investigation as involved in the misconduct have been permanently excluded from IEEE membership.

–IEEE is the organization which publishes the journal

Being a journal editor, a legitimate one, is a thankless job. Often you hire “assistant” journal editors to help with the work, for no pay (I’ve done this a few times). And so the game was fixed to get certain articles published with scant oversight. Fair enough.

Inside Higher Ed asked IEEE a series of questions about which papers were retracted, which editors had been barred from working with the group, how they violated peer-review rules and whether the papers had flaws that had been identified or were being retracted solely because of problems with the peer-review process. IEEE declined to answer any of those questions.

Seriously, they won’t say which articles have been un-published due to fraud? Should a scientist then play it safe by disregarding all articles in this journal?

This behavior raises many questions, questions unasked by the article I’m quoting from. Chief among them? WHY are they protecting the fraudulent editors? If they did the decent thing and revealed which articles are unpublished, it wouldn’t take much to backtrack to figure out who the associated editors are.

Instead, we have a mysterious 29 unpublished papers…already published in physical documents. Can’t tell you what they are, or course.

This, ultimately, brings up the real problem in our journal and peer review process: lack of integrity. There is simply no way a journal with integrity would protect fraudsters, quite possibly allowing them to commit the same fraud at a different journal. These people committed a crime against hard science, and the journal will cover for them. Yeah, “why” is a fair question to ask, shame I’m alone in being curious why they’d do that.