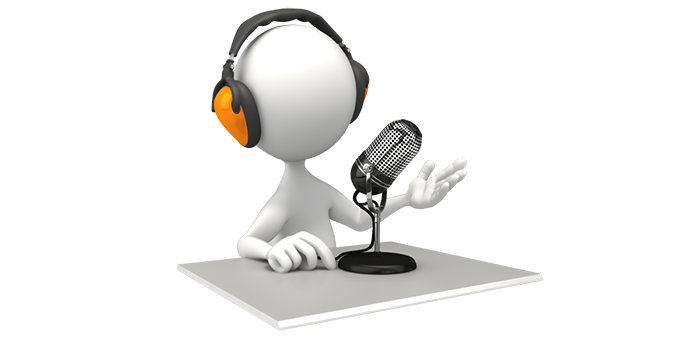 Over a year ago, I began preparing to launch a podcast called “Research in Action” as part of my full-time job as the research director for Oregon State University Ecampus (it’s available in iTunes and on SoundCloud if you want to check it out). I had never hosted a podcast before, but I was, and continue to be, an avid podcast listener (some of my current favorites, which all happen to be related to productivity and habits, are The Action Army, Being Boss and Happier). I thought that podcasting would be a way to connect with other researchers and also build the reputation of the Ecampus Research Unit that had just launched in August 2015.

While I knew that starting a podcast would be a fun and challenging new project, I didn’t expect that becoming a podcaster would completely reinvigorate my life as a researcher and higher education professional.

For those of you who may not know, podcasts are kind of like radio shows, with audio (and sometimes video) episodes that post on a regular basis (“Research in Action” episodes post every week, but other podcasts post monthly or in “seasons”). There are a huge range of podcast topics available and they are usually 10-60 minutes (sometimes more) in length. Some shows are solo shows, others are interview-based, and some have co-hosts. Most are available to be downloaded to mobile devices, so you can listen to them on your commute, while exercising or while doing the dishes (I’ve done all three).

For most “Research in Action” episodes, I interview other researchers about a range of topics including writing productivity, research collaboration, mixed methods, data management, e-Research and more. Each episode is about 30 minutes in length and we also often post bonus materials. We also start each month with a preview episode, so you can hear clips about what’s coming up on the show.

Producing a weekly show has been a serious time commitment not just for me, but also for the team of people who help me with finalizing each episode. I have the fortunate circumstance of having production support from our OSU Ecampus multimedia team to edit the show’s audio as well as student workers who assist me with the transcription of each episode. My administrative assistant also assists with show notes and the instructor guides that are produced for each episode.

We pre-record episodes to make sure that we can keep up with the weekly schedule, so on days when I have access to the studio, I might record up to four different interviews for future episodes. As I write this, we just posted episode 50 and we have recorded interviews to cover us through episode 69.

In additional to these tasks, there are also several other things that go into creating each episode including coordinating studio time, booking guests, preparing questions in advance for guests to review, recording the episode and editing the episode content, which all occur before the transcript, show notes and instructor guides are created. Then, once episodes are launched, there’s also the promotion of those episodes through social media (come find us on Twitter @RIA_podcast!).

I’ve learned a ton of new skills throughout this podcast project and all the work has been totally worth it to meet the two main goals of the podcast:

A main benefit of hosting “Research in Action” is that I have a reason to cold-email pretty much any researcher, no matter how famous, and ask them to chat with me for 60 minutes. This was how I got to talk with Wendy Belcher, John Creswell, Neil Salkind and several other “celebrity” researchers.

The show has also allowed me to build my own professional network of researcher contacts that I can reach out to if I have a question, want to collaborate on a project or want to write something like this post (which Inger recommended after she was interviewed for the show – she is featured in episode 33).

“Research in Action” has also been promoted on other higher education podcasts like Teaching in Higher Ed hosted by Bonni Stachowiak, Women Who Wine hosted by Tanya Joosten, Nori Barajas-Murphy, Jess Knott, Laura Pasquini and Patrice Torcivia, and Topcast: The Teaching Online Podcast hosted by Tom Cavanagh and Kelvin Thompson at the University of Central Florida. These connections led to me being a guest on Teaching in Higher Ed and anepisode of Topcast, as well as a conference presentation on podcasting in higher education that will take place this fall at OLC Accelerate.

More importantly, not only has my own network grown, but we’ve also created a community of “Research in Action” listeners who are regularly chatting together on Twitter, asking questions that will be featured in future episodes and answering each other’s questions about research across disciplines.

As for the second goal of increasing research literacy, as someone who was trained in qualitative methods (my disciplinary background is actually Women’s and Gender Studies), talking to such a diverse range of guests means that I’m often speaking about topics that I know very little about. I get to ask all kinds of basic questions like, “What is psychometrics?” “How does one get started as a data analyst?” and “What kind of journal do you use for your research notes?”

In addition to learning a ton of information that’s new to me (and hopefully to our listeners as well), hosting “Research in Action” also means that I get to talk with other researchers on a regular basis about topics related to research. It sounds kind of obvious that this might be helpful for researchers to do, but I have found that if you don’t build these kinds of networks into your life, it’s actually kind of rare, especially beyond graduate school, to talk research with other researchers in places other than conferences.

In other words, “Research in Action” has offered a great excuse to completely, and unabashedly, geek out on research-related topics with other people who want to do the same.

I hope you can see the range of benefits that being a researcher/podcaster can bring. In Part 2, I’ll share some more information about how to get started with podcasting for those of you who want to learn more.

Author Bio: Dr Katie Linder is the research director for Oregon State University Ecampus and the host of the “Research in Action” podcast and the “You’ve Got This” podcast.