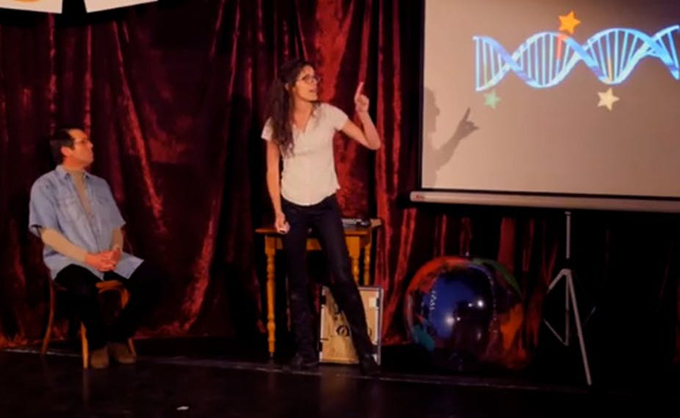 Curious by nature, I have always been passionate about science. During my studies, it seemed natural to me to turn to research. Like the majority of doctoral students, my enthusiasm has been somewhat shaken by the reality of the laboratory, between the experiments that do not work, the hypotheses swept over after several months of experimentation, as well as the repetitive protocols. In short, arrived in third year of thesis, I felt the need to open my horizons.

In parallel with my Ph.D., I had a keen interest in extension and enjoyed participating in events such as Science Fair , a breath of fresh air between two lab experiments. It was then that I heard about the “My Thesis in 180 Seconds” competition, which challenges PhD students to present their research subject in a way that is accessible to the general public. My love for the transmission has obviously convinced me, since I won the Audience Award, from the regional selection to the international finals. An experience that made me want to continue in the path of scientific mediation.

The choice of humor 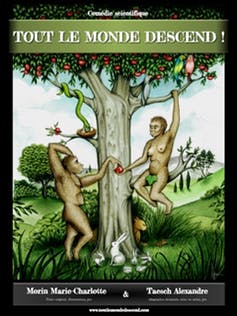 Poster of the play by Marie-Charlotte Morin, represented in Paris, Strasbourg and Brussels. Author provided

After the contest, I first video format, the popularization meeting some success on YouTube. But a meeting with the director Alexandre Taesch convinced me to stay on the stage, where “we breathe the same air as the public”. We tweaked together a scenario I wrote a few weeks earlier about Darwin’s theory. Everyone goes down! was born. The goal of this science comedy is to use black humor to fight obscurantism.

Why Darwin? Because the theory of evolution is a great pretext for tackling much deeper subjects: to develop the foundations of the scientific method, to explain why science is not a belief, to talk about the place of chance in the transformation mechanisms of the living. If men once believed that the earth was flat and the sun was circling around their planet, they all have a hard time admitting that the mutations at the origin of evolution came about by chance, without the intervention of a superior intelligence. And the attacks that affect this theory remain legion.

I wanted to make a funny, accessible show to attract an audience that would not necessarily go to see a scientific conference. I could have written a piece of 5h so much to say on the subject. Alexander helped me avoid monologues and rewrite whole passages to introduce new characters, dialogues and more dynamic scenes. It was fundamental to keep the thread of humor so that the neophytes are then seduced by the bottom.

A project that travels

When one embarks on a completely unknown project (I was neither an author nor an actress nor a tour manager), the transition is not always obvious. It was necessary to go to seek funds, to convince rooms to welcome us, to realize all the media of communication, of the poster with leaflets, while passing by the web site and the mailings. Realizing this piece brought me a solid experience in project management. Two years and forty-five performances later, I must admit that we are proud of the road traveled. The piece has been incredibly well received by the public and the press, and after our performances in Paris, Strasbourg and Brussels, it is in Liège that we are about to play in 2019.

My shift towards science popularization was initiated by these three short minutes to talk about my thesis in 2014, but my career prospects have consolidated with the success of this comedy. Since this summer, I have definitely stopped the research to focus on several scientific communication projects, including an illustrated book project related to the subject of the play. I will be able to satisfy my secret passion for illustration while defending the scientific method. The mission of this book will be to illustrate the conflicts between science and secular dogmas. Opposition oh so topical, especially in the United States where only a quarter of Americans are convinced by the theory of Darwin and where global warming is denied by a government obviously anti-science.

The obscurantists will convince people with very simple words, it is urgent to fight them in the field with a didactic approach, committed and resolutely funny. If, I assure you, we can talk about very serious things without taking ourselves seriously, here is where my added value is and I intend to continue in this way.

Author Bio: Marie-Charlotte Morin is a Doctor of Biology at the University of Strasbourg