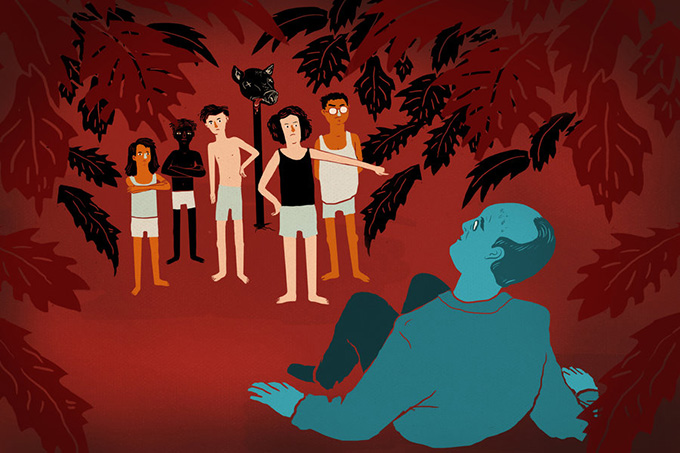 In times past, tenure was awarded by scholars, to scholars, as a reward for scholarship. Those days are gone. Today, tenure is (theoretically) awarded by administrators, to scholars for, well, reasons that have little to do with scholarship. Having the right skin color can certainly be a factor, and covering up pedophilia is certainly a possibility…but scholarship no longer seems to be on the table at many schools.

Administrators know nothing of scholarship, so it’s understandable they can’t use scholarship for tenure. One of the weird things now is promotion (and tenure is controlled by admin like everything else in higher ed) is determined mostly by student evaluations.

It doesn’t matter that we know teaching effectiveness is negatively correlated with student evaluations, or that evaluations are worth very little at best, admin uses evaluations to determine promotion.

It’s also well known that the easier the grading, the better the student evaluations, this obvious fact has been shown by many studies. Be a bad teacher who grades easy, and admin loves you.

I saw the net result of these policies time and again when I was at a community college: the least effective, most clueless, teachers had no trouble getting praise from admin…they just gave every student an A, even the ones who never came to class a single time. Admin was fine with that. Teachers who actually did their job with integrity were actively punished by admin.

Now, it’s not just at my old school, at many schools if you have any standards at all, it will negatively impact your career. If you have standards, then you’ll fail students at some point in time. A failing student is an unhappy student. I don’t have a study to back that up, but anyone in the industry will tell you that, yeah, failing students give poor evaluations of the teacher. It’s the students you fail, and not scholarship, who determine the success of your career in higher education.

The gentle reader might think I’m exaggerating, but allow me to demonstrate:

The article above actually highlights several insanities in higher ed today, but allow me to show how little it takes to wipe out 6 years of work for an academic. Let me clarify that before moving on: it takes at least 6 years to even be up for tenure, and if you’re turned down, you’re fired. So, a few unhappy students in 6 years and it can easily be game over.

Seriously, it’s not a puzzle why the average college grade is A- now…everyone in higher ed has figured this out.

So let’s get to how little it takes for students to destroy an academic’s career. It used to be it required, you know, something serious, like a rape accusation…but now? You just have to fill in a bubble, anonymously:

Now, average is “3.33.” According to the Poo Bah, this was a good enough score to merit tenure (seriously what about scholarship?). Student evaluations are given at the end of the year, and usually at a time when nothing important is going on in class. So, on the day she gave out evaluations, maybe only 9 of the 12 students were there (keep in mind, on community college campuses, you can lose half or more of the class once the student loan/grant money checks are handed out).

So, 9 students fill out the form. Let’s assume 7 of them fill in the “3.33” bubble, which would be good enough. Then the fool of a teacher actually failed 2 students (gasp!). These unhappy students fill in a “1.” Guess what the average is? Well, take 7 times 3.33, and add 2 points to it (1 for each unhappy student), then divide by 9 students:

Hey, look, I’ve pretty much matched what happened (the teacher’s average was 2.83). How fair is it that 6 years of work is wiped out this way? Fail 2 students in a class, and you’re gone? Seriously?

Another professor explains what horrible thing she did to make the students so upset with her:

That’s right: she insisted students turn in their work on time. It’s very clear a few students taking fake courses elsewhere on campus, weren’t used to actually having to be responsible, and so they didn’t do the work on time (they were probably surprised they had work at all to do), so she failed them.

So, she lost tenure because she actually expected her students to show some professional responsibility. Goodness, with admin defining down what it means to be a tenured professor to this level, soon it’ll be a point of embarrassment to have tenure.

Tenure really did mean scholarship for most of the previous century, so again I ask: what about scholarship?

American’s School of Communication will by the end of this semester lose four faculty members of color, including Brown, who is Latina — though she’s currently appealing her tenure denial…

Carolyn Brown is Latina, and her picture looks about as “Latina” as her name. I know, I’ve mentioned campuses are now notorious for their racist and sexist hiring policies, but I want to reinforce the confirmation of my claim here:

“They used me as a face of diversity,” Brown said, “and when I went up for tenure, they threw me away. It’s really disappointing. I’m still kind of devastated.”

Gee whiz, Professor Brown, don’t you think maybe they want someone who looks more Latina and also has a more Latina-sounding name? That what higher education seems to be about nowadays.

Again, I ask, what about her scholarship?

To be fair, admin defends itself. First, it uses administrative racism as proof admin isn’t being racist here (I can’t make this stuff up):

Why is admin tracing race so closely? I’m sorry, but if you’re clearly making faculty hiring decisions based on race, measured to the nearest half of a percent…you’re racist.

Similarly, admin laughably defends its decision to use her teaching evaluations so capriciously:

…the university’s Committee on Faculty Actions that Brown’s teaching record is not tenurable, based on the variability of her teaching ratings from students: some high, some low.

Well, there you go, a Committee filled with people who will be fired if they disagree with admin…agree with admin. How many times have I cited fake committees much like this which support bizarre administrative actions?

Again, the “some high, some low” is a flag that she’s a good teacher. The good students like her and give her great scores, the fake students get failed, and slam her on the evaluations. A terrible teacher would have all high scores (because of just giving A’s to everyone). Too bad admin never teaches, and so doesn’t understand stuff like this, and instead simply wants a school full of terrible teachers.

Oh, I still am curious: what about her scholarship? American is a research university, so they have policies about promotion:

By American’s own standards on tenure, assessments of one’s teaching should not hinge on students’ evaluations alone.

As I’ve highlighted so many times before, admin never lets policy get in the way of whatever it wants. Scholarship should be on the table, since evaluations are not supposed to be a major factor…too bad admin can’t really judge scholarship.

There’s so much idiocy touched on this article, it’s hard to just focus on one thing, but something merits a digression:

The interpretation of those studies is “inherently biased,” but the studies themselves are not biased. The studies absolutely show that women and minority faculty members tend to rate lower on evaluations. But, for some reason, even though evaluations are being used in serious decisions, we can’t just take the studies at face value: women and minority faculty members aren’t as good at teaching as “others.” I’ve addressed this in more detail elsewhere, but I’ll summarize: I’m fine with tossing or ignoring these studies for a number of good reasons…but reinterpreting the results to whatever suits your ideology and calling the results of the studies “biased” is ridiculous.

Ultimately, however, we learn that racism will protect her, and that we shouldn’t worry about her being fired based on failing a couple of students:

“…scholars of her stature, particularly scholars of color, get offers to go elsewhere fast.

“It’ll be a yearlong process to replace her,” he said. “The likelihood we’ll get another woman who is a minority is a tick above zero.”

On how many levels is it pathetic that the guy is upset that they won’t be able to get another minority female to replace her? He’s right, however, that she’ll have no trouble getting hired elsewhere, because all many schools look at when hiring is genitals and skin color.

So, she’ll probably get a nice hiring bonus at some other place, one which will likely “clear out” a position for her (i.e., someone with the wrong genitals/skin color will be out of a job) so it’s all good. Hopefully she’s learned her lesson, and won’t fail any more students. I’d hate to see her waste another six years of her life just for having integrity.

But I still think scholarship should have been a factor here…