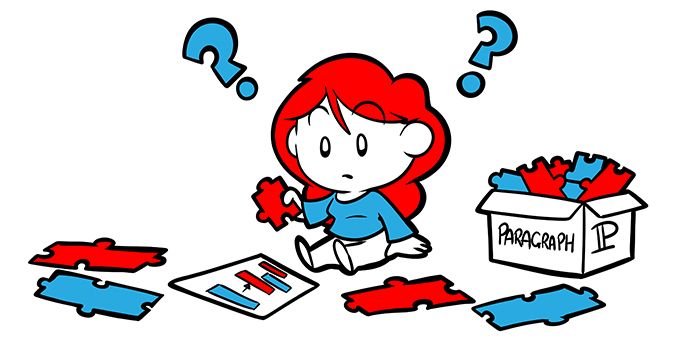 I was recently asked how I felt about paragraphs. “Well you know, all the feels” I might have replied. But I didn’t, largely because I don’t usually think about the paragraph. The question made me wonder whether I take the paragraph for granted.

Paragraphs sit way below my consciousness a lot of the time. But paragraph awareness rises to the surface when I am reading something where the writer doesn’t appear know what the paragraph is. I pay attention to paragraphs when I expect to see them and they aren’t there. I notice their absence rather than their presence.

A caveat. I don’t expect to see a paragraph if I am reading a text intended to break the conventional academic prose mould. Something that is written evocatively, or as a montage or as prose poetry or as a stream of consciousness. It would be silly to expect deliberately ‘artful’ prose to follow the same conventions as your ‘standard’ academic English. Nor do I expect to see paragraphs of a uniform length. Paragraphs can be of varying lengths, even, on occasions, single sentences.

But I am always jolted when I see a page – or more – of academic writing that isn’t broken up somehow. Broken up into, yes, paragraphs.

So what is it about the mega-paragraph that alarms me?

Well, it’s not simply that it’s easier for the reader -me – to engage with the writer’s ideas if the prose is subdivided.  That’s certainly true. But I also get concerned because I have come to associate the monster paragraph, particularly in academic writing, with a muddle of ideas.

As a frequent reader of theses and academic papers, I understand that an over-inflated paragraph isn’t usually the result of a writing problem. It’s not that writers don’t know the basic principles of composition. That they haven’t a clue what a paragraph is. Well, yes, occasionally that might be the case. But more often than not, the swollen and distended paragraph comes from a writer who doesn’t quite know what they are trying to say.

The elongated paragraph very often signals a writer not yet able to choreograph the development of an overall idea. We might say that lengthy paragraph writers have a thinking-writing – not a technical-writing – problem.

Puffed up paragraph writers have got all of their stuff together, but they don’t yet know which of the bits they’ve accumulated are more important than others. They don’t yet know what order the bits should come in. They can’t construct the steps which lead the reader through their argument. They have no red thread, as my Nordic colleagues would say.

The most common way to think about the paragraphs used in academic argument is to see them as made up of three elements:

Now, if you google ‘paragraph’, you’ll find lots of different mnemonics for these three elements, all of them designed to help writers with the conventional academic paragraph. I quite like the acronym MEAL – I’ve found it helpful for anyone who doesn’t ‘get’ the paragraph:

But, as I said, there’s lots of ways to talk about paragraphs, and you need to find the one that makes most sense for you. And I’ll repeat the caveat here too – not all types of academic writing use this kind of paragraphing – it is a very ‘English’, read white Western, way of thinking about academic argumentation.

However, paragraphing is important for many of us. Academic readers expect to see them. So that makes them something to consider. But for me, the first point of knowing about paragraphing is not about mnemonics, but about the writing.  You see, we writers can use our understandings of the paragraph to help refine both our drafting and revising.

Because the paragraph is a lens through which to manage the thinking-writing, the development of ideas, it can be very helpful to:

Rather than simply writing a bullet point list of the ‘stuff’ you are doing to write about, use topic sentences as your outline. This may mean that you have to generate a bullet list first, and then turn it into topic sentences. And in turn, this may mean that you have to do some re-ordering. And you may find yourself sub-dividing some bullet points into smaller points and sentences. Hooray. It is at the very point where you subdivide a bullet point that you lessen the risk of writing giant, muddled, page long paragraphs your reader can’t make head nor tail of. And once you have the topic sentence of each paragraph sorted, you can then write your paragraphs according to the MEAL moves – or not.

List the topic sentences that you have already written in your draft. The start of each paragraph. Once you’ve got them listed you can see whether they are in the right order and/or whether any steps are missing. Do the topic sentences in themselves make a coherent and logical argument? What needs to be done to make the steps in the argument work? This process is sometimes called making a reverse outline.

Just in case you do find yourself writing pages of stuff without any paragraphs, you might like to try these two strategies to see if they help. Stop and topic sentence. Or read through and extract the topic sentences as a check.

Do that and readers like me won’t be aware of your paragraphs when they read your revised writing.