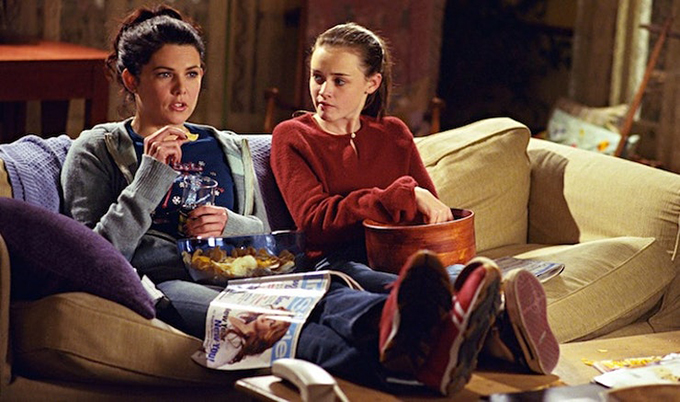 Like so many others of my generation I spent much of last weekend watching the Gilmore Girls reboot, ‘Gilmore Girls: A Year in the Life’.

I came pretty late to the Gilmore Girls party, (I watched the final episode of series seven on Friday afternoon before launching straight into the reboot), but have appreciated the rapid-fire dialogue, witty pop culture references and sweet familial relationships as a welcome distraction from the final, painful days of my thesis writing.   Last night I finished watching the new season and it left me feeling melancholic.  The reboot is, perhaps, the last thing you should watch on submission of your PhD thesis.  Why?

Rory had so much potential and she didn’t succeed

Rory’s diligent approach to her schoolwork saw her valedictorian of her high school and accepted into a bunch of Ivy League Colleges.  Then her talent, enthusiasm and tenacity got her the role of editor of the Yale Daily and a junior/intern position on a regional paper.  However, we find out in the reboot that all her hard work and talent has resulted in… well, not much actually.  Sure there’s an article in a prestigious New York paper and some interest in her from an online-only publication, but she is willing to admit that the journalism thing didn’t really work out.

Just as I was hoping that the reboot would open on a wildly successful Rory, we all hope for professional success post-PhD.  Friends and family in particular, for some strange reason (ahem imposter syndrome), believe that great things will automatically come out of all the hard work that went into a PhD.  Unfortunately, that’s not necessarily the case.  And if Rory, someone who always seemed to find success so easily, can’t make it then who are we to think we can?  The potential for a future as Doctor without a job title is real.

Unlike Rory, my favourite GG character,Paris Geller, becomes a wildly successful professional.  However, she is incredibly unhappy in her personal life.  In fact, almost all of the characters in the reboot are unhappy in some way – Sookie ran away from Stars Hollow for two years and still seems unhappy; Michel is unhappy, bored and underpaid at the now-staid Dragonfly Inn; Luke is unhappy because Lorelai is keeping things from him; Lorelai is lost and unsure about her relationship with Luke; April appears to be having a total crisis of confidence; Christopher is miserable having sold out and gone to work for his family; Emily is in mourning and finding that she has little to live for without her Richard.  Basically, the whole series is steeped in unhappy people.

I went into the reboot with some kind of expectation that as the characters have grown older (as we all do over our PhD process) that they will have somehow transformed into happier people. Or if not happier people, then people who are content with their lot in life.  Instead, apparently, we have bitterness, apathy and/or aggression to look forward to.  When you consider that you go into a PhD full of verve and enthusiasm, and then work through a bunch of dizzying highs and even more self-loathing lows, it would be nice to think that you would come out the other side happier and healthier.  If the people of Gilmore Girls are anything to go by this probably isn’t the case.  Unfortunately, the anti-climax of a PhD submission is similarly disenchanting.

They are all old

Now this is a very age-ist thing of me to say, but as someone who is Rory’s age and so recently watched the original seasons it’s somewhat confronting to have time zoomed up and Rory’s youthful, recently graduated face morph into my own holding-on-to-youth one.  It’s a sad reminder of the cruelness of time.  And I’m not only talking about the wrinkles.  Instead, it’s an extension of the idea that with time there is an expectation of accomplishments.  However, time might instead just throw you back to where you came from.  A scene at the beginning of the ‘Summer’ episode has Rory ‘back’ in Stars Hollow, completely in denial that she isn’t living in New York and is, in fact, living in Stars Hollow.  Right back where she started.  I couldn’t help but be reminded of my return to university after three (somewhat successful) years in the public service.  I returned not only to the same university but to the very same desk that I had been sitting at during my Honours year.  While I told myself that I had developed as a person, for all intents and purposes I was back in the same office on a massively reduced income.   Seeing Rory old and back in Stars Hollow is a harsh reminder that I am old and am an unemployed university graduate. Yet again.

Apparently the characters now need escapism from their own lives

For some bizarre reason the series is dotted with musical scenes.  One is, literally, of a musical. The scene goes forever and it feels like its only purpose is to allow Lorelai to be a creative snob.  Then there are the musical scenes involving the Life and Death Brigade and the Wedding.  These are a complete departure from the original series which included no musical numbers, and I’m not sure whether they function so much as filler for the overly-long 90 minute episodes or whether they are pleasant moments of escapism from the tortured lives of the characters.  I don’t have musical interludes to escape the tortured(/mundane) moments of my life (i.e. the hours and hours spent tapping away on a computer), but I do like to go home to watch Gilmore Girls and escape my own reality.  That the Gilmore Girls and their merry clan now also need escapism is a dire statement of their new reality.  If Gilmore Girls is going to depress me, what’s going to cheer me up?

That’s not to say that there aren’t some charming moments. Lorelai bonding with other women and (not) walking the ‘Wild’ trail; Paris Geller kicking professional butt and being generally amazing; Michel finally being allowed to be openly gay; Luke being so proud of Rory that he publishes her article on the diner menu; Kirk becoming an awesome hipster; and Emily Gilmore finding her calling as an incredibly melodramatic tour guide (and a lovely nod to where Lorelai’s theatrical side really comes from).

I was going to advise anyone who might be concerned about their post-PhD future to think twice before checking in with the Gilmore Girls again.  However, there was one final part of the Gilmore Girls reboot that I loved and that makes me glad I watched it… having the opportunity to share it with friends.  Doing a PhD (and then finishing a PhD) can be a lonely process, which is why it’s so important to be able to find like-minded people to share enjoyable moments with. And then to thoroughly critique those moment with afterwards.

So long as you have someone to share the Gilmore Girls reboot journey with, or the PhD journey with for that matter, you’ll survive it… and look forward to what follows those ‘last four words’ (‘congratulations, you are PhinisheD’ ???? ).

Author Bio:  Genevieve Simpson has completed her PhD, which examined community, industry and government perceptions of residential solar energy technologies and policies to support its adoption.