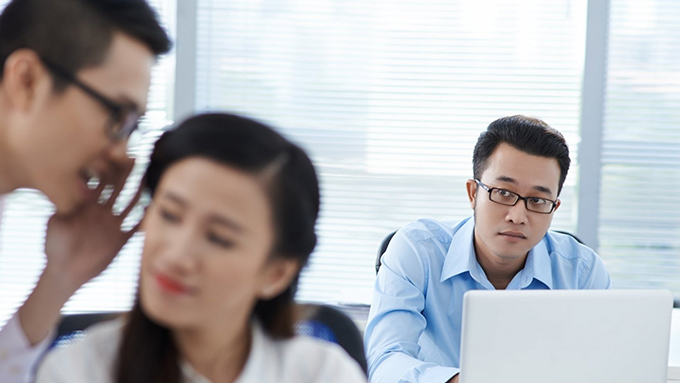 Gossip gets a bad rap – from tabloids full of salacious celebrity gossip, to the badly-behaved teens of television programmes like Gossip Girl. But while it might get dismissed or reported as unsubstantiated rumour, gossip is a key part of politics and the way the world works.

Gossipy women are over represented in popular images of gossip. An informal analysis of 100 Google images of gossip revealed 62% were of women only, 7% were men only, and 31% showed men and women gossiping. This reinforces the popular and enduring myth that men don’t gossip, but research shows that men and women engage in the same amount of gossiping activity.

Gossip can be traced back to the origins of language. Evolutionary psychologist Robin Dunbar even argues that language evolved to enable people to gossip. From its earliest form to today, gossip has been a way to pass on socially useful information about who you could (and couldn’t) trust, who was a free rider, and who talked bullshit.

This type of talk produced social cohesion and alleviated conflict. During the Middle Ages the word gossip (originally godsibb meaning “sponsor at baptism/godparent” in Old English) evolved to describe women who supported other women during childbirth. Over time and after a number of changes to spelling, the term gossip took on the meaning of a familiar acquaintance, a friend, and later to “anyone engaging in familiar or idle talk”. Today, the term is used and interpreted in a number of ways, as a verb “to gossip”, a noun “the gossip” or even to refer to a specific person who engages in gossipy behaviour – “a gossip”.

There was no negative meaning attached to gossip until around the time of the European witch hunts in the 16th to 18th centuries. Gossip was a catalyst for accusations of witchcraft and sorcery, leading to inhumane use of medieval instruments of torture. The “scold’s bridle” was designed to punish and prevent women from speaking. Thus, gossip’s negative reputation and stereotype as “women’s talk” began.

Paradoxically, at the same time, gossip as men’s talk spread throughout the 17th and 18th century in English coffee houses. As exclusive resorts of the educated and rich, they were places where learned men (there is little evidence of women in coffee houses, unless as servants) and their male students came to demonstrate their wit and intellectual talents. Here, the myth that women gossip but men have serious conversations was born.

My research into gossip and organisations shatters the illusion that gossip is trivial or dangerous women’s talk. When interviewing men about their experience of gossip at work, they often begin by saying “I’m not one to gossip, but …”, and then go on at length to talk about how they use gossip strategically and politically.

I have encountered many euphemisms for gossip such as “shop talk”, “post-meeting debriefing” and “corridor conversations”. Men seem to feel more comfortable with these terms. Rather than asking “what’s the gossip?” on return from holiday, they are more likely to ask “what’s been going on?”. The intention behind the question is the same, but the latter may soften the shame associated with being a gossip. Similarly, words I have heard used to describe people who gossip are “they are a good listener” and have “good people skills”.

There is a wealth of material calling for gossip to be eliminated in the workplace, and books advocating spiritual reasons for resisting gossip.

Popular stereotypes of gossip overemphasise the negative judgements made in gossip, but it can be associated with compassion, empathy and noticing suffering. Gossip is a way of expressing emotions, both positive and negative, a way of “letting off steam” and an emotional reaction to perceived social injustice.

There are also times when gossip is an expression of concern about unethical or unprofessional behaviour – for instance when there is “common knowledge” about sexual abuse, but nobody speaks up. When the topic of gossip is about poor practice in organisations, it can act as an early warning signal that should be heeded, rather than ignored or disregarded.

I am not saying that all gossip is good. There are times when gossip can do harm to the reputation of people and organisations. Negative gossip is a form of bullying, which is detrimental to people’s wellbeing. The decision to gossip – or not – is always an ethical decision.

Gossip has undergone a slow rehabilitation since I first began researching and writing about it over 25 years ago. As my recent book Gossip, Organization and Work shows, gossip is being taken seriously as topic of research in communication and business.

Globally, the #MeToo movement has changed perceptions of gossip, as has the rise of “speak up cultures” and the creation of psychologically safe environments where truth can be told without fear of recrimination. Whistleblowing is vital for exposing misconduct or hidden threats and maintaining an open society. The focus has now shifted from gossip as a problem itself, to gossip as a way to represent the “problem behind the problem” – exposing structural issues that have been swept under the rug.

The pandemic has also shone a spotlight on the benefits of gossip. Almost overnight, lockdowns removed opportunities for the casual conversations that constitute gossip – conversations in the coffee queue, and before or after meetings. As many people return to the office, they may realise how important these little moments of gossip are to social bonds and cooperation.

Author Bio: Kathryn Waddington is a Reader in Psychology at the University of Westminster