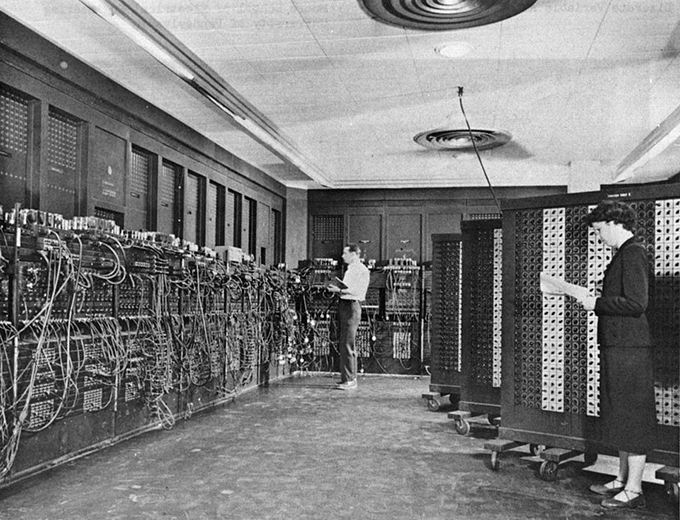 In the year 2000, Goldman Sachs employed 600 stock traders, according to Marty Chavez, the investment bank’s deputy chief financial officer. Now, Chavez told a symposium at the Harvard University Institute for Applied Computational Science in January, it employs just two. The other 598 have been replaced by 200 computers.

Meanwhile, a 2017 McKinsey Global Institute report, also published in January, suggests that 38 per cent of jobs in hospitals worldwide have the potential for automation, which would see the loss or alteration of some 35 million jobs. The report, A Future that Works: Automation, Employment, and Productivity, also estimates that 44 per cent of jobs in the finance and insurance sectors could be automated, affecting 55 million employees. In total, it says 1.2 billion jobs could be affected.

The creep of automation has been with us ever since steam engines replaced horses and spinning jennies began to replace manual textile workers at the dawn of the so-called first industrial revolution. Two subsequent rounds of transformational automation are also widely acknowledged. The “second industrial revolution”, initiated in the 1870s, involved the mass adoption of electricity and telephones, and the mass production of goods, while the third, beginning in the 1970s, was based around digitisation, electronics and automated production. But the effect of each of these technological changes was to increase human productivity, leaving white-collar jobs that involved an element of creative thinking largely unaffected.

By contrast, what is known as the fourth industrial revolution threatens to replace human productivity altogether. It involves the integration of cyber-physical systems, in which artificial intelligence, robotics, nanotechnology, 3D printing and biotechnology work synergistically to replace not only human hands but also human brains. Indeed, there is potential for artificial intelligence to go far beyond human brain power, combining vast processing power with the ability to learn through deep machine learning.

The corresponding shift in labour markets will see the replacement of all routine jobs that can be programmed into an algorithm. This includes professions that currently require higher education, such as accountants, auditors, pharmacists and paralegals. For instance, according to Geoff Colvin’s 2016 book, Humans are Underrated: What High Achievers Know That Brilliant Machines Never Will, e-discovery firms can now scan millions of documents for legal precedents, while also identifying subtleties in the language that reveal motives and shifts in judicial behaviour that a human eye could easily miss. So for law students, memorising case law is already an outmoded skill. We will still need lawyers in the future but far fewer of them.

In short, the fourth industrial revolution requires new forms of work and new ways to educate millions of people worldwide. The labour market transition is already well under way, but when it will be complete is unknown. The McKinsey report estimates that half of all the current jobs in the world could be automated by 2055 but it acknowledges a 20-year margin of error in both directions, depending on social adaption to the technology and government regulations.

Either way, the employment market for future tertiary education graduates will be drastically different from what it is today. A report published last year by the consultancy InfoSys, titled Amplifying Human Potential, suggests that, unlike during the previous upheavals, the speed of change this time means that society may not have enough time to adapt to the pace of disruption in the labour market. Rapid, mass technological unemployment needs to be met head on with a new emphasis on upskilling existing workers and inculcating a culture of lifelong learning. Employees will need to learn new skills and embark on new career paths many times over.

Awareness of these issues is rising. This is evidenced by the large number of reports being produced, conferences being held and new stories being written about the issue of artificial intelligence in particular, over the past 18 months. But while there is some discussion of what role higher education can play in preparing the future global workforce and in shaping regulatory policies, many institutions have yet to engage seriously with the issue.

As a first step, people in higher education need to better understand the fourth industrial revolution. This will allow them to authoritatively probe their students’ future-readiness and to think about how higher education can improve it. Even in fields where jobs are not replaced, automation of routine tasks will fundamentally alter them. So, if their graduates are going to remain employable, higher education institutions need to explicitly inculcate the kinds of critical thinking, emotional intelligence and learning ability that, for all the advances in AI, remain beyond the current abilities of computers. The future labour market needs not content experts or information processors but creators, analysers, problem solvers, collaborators and lifelong learners who are able to acquire new skills as old ones quickly become obsolete.

In addition to the traditional four-year undergraduate model, higher education institutions – in collaboration with governments and industry – need to develop flexible, cost-effective educational programmes that are sensitive to the needs of employers and that go well beyond the “micro-credentialling” of very specific content knowledge or skills provided by massive open online courses. An example would be the Mooc platform edX’s new MicroMaster’s degree. This consists of a collection of graduate-level courses accredited by specific universities and endorsed by specific companies. For example, Boston University is offering a MicroMaster’s in digital leadership that is endorsed by the financial services company Fidelity Investments. The company certifies that the micro-credential is valuable to it and will be recognised as such in its hiring process. And the university offers those who successfully complete the course the opportunity to complete a full, accelerated master’s at a reduced price.

Another Mooc platform, Udacity, is offering something similar, which it calls the nano-degree. Such undergraduate-level courses, lasting six to nine months, are also endorsed by industry and form another spoke of a new global movement, championed by industry, called “just-in-time” education, aimed at enabling lifelong learning.

Quality will also be essential. Simply ticking the “I attended university” box will not be sufficient for future employment. And any debt accrued will not necessarily be serviceable. Higher education institutions charging large sums for mediocre four-year undergraduate degrees will likely lose the student enrolment necessary to stay open, while those that can quickly develop new degrees with relevance to an ever-changing workforce may see their enrolment increase.

For those students that still attend four-year undergraduate programmes, new policies will have to be developed around how they are to be assessed, given that it will soon be difficult for a faculty member – or a machine – to distinguish a paper written by a student from one written by a computer. Libraries and faculty development centres will need to work with education resources and technology teams to prepare new ways to monitor plagiarism, for example.

Nor will higher education institutions themselves be immune from the labour-market effects of the fourth industrial revolution. According to the McKinsey report, 34 per cent of jobs in the “educational services” sector globally (more than 40 million posts) have the potential for automation. That likely includes much of university administration. Such automation will potentially provide universities with a windfall of freed-up resources previously spent on salaries but they will need to think very carefully about where to invest it. Will they add new infrastructure, classrooms, and faculty? Will they offer more financial aid to students? Will they spend more on educating staff – including, importantly, admissions and careers office staff – in future needed skills? And what will happen to endowed chairs in departments that are no longer viable, such as accountancy?

Higher education must also focus great effort on researching and shaping the governance and regulation of the fourth industrial revolution. In particular, universities, in collaboration with thinktanks, governments and industry, need to craft policies that will avoid the worst consequences of mass, technology-induced unemployment. For instance, we need to better understand the feasibility and impacts of a universal income policy, whereby everyone would be provided by the state with a basic income well above the level currently provided by the state to unemployed workers. Another idea was put forward by Microsoft co-founder Bill Gates in an interview with Quartz magazine in February: he suggested taxing robots in order to fund the retrenchment of displaced workers into jobs such as teaching and social care, in which “human empathy and understanding are still very, very unique”. In the same month, the European Parliament rejected a proposal to tax robot owners to fund the retraining of people put out of work by robots, but embraced a call for further work on the ethics and legal liabilities around deploying robots.

Singapore stands out as a nation already working effectively to address these challenges from the higher education perspective. Last year, the country’s government launched its SkillsFuture programme, aimed at “providing Singaporeans with the opportunities to develop their fullest potential throughout life”. Its Leadership Development Initiative has funding to send 800 students abroad in the next three years to gain international experience and specialised skills. Singapore has also built two “lifelong learning institutes”, where adult learners can gain new skills. And the Ministry of Education and the National University of Singapore are developing government-subsidised nano-degrees costing just S$200 (£115) and coming with a guarantee of employment or your money back. Examples of jobs that a student can get with these courses are automated car mechanic, virtual reality developer and even nano-degree course developer.

In its 2017 budget, Singapore’s government has also announced significant funding for a “Global Innovation Alliance”, which will provide opportunities for tertiary students to build connections and find training overseas. And the Ministry of Education recently funded the construction of one of the first liberal arts colleges in Asia, Yale-NUS College, in light of the fact that liberal arts’ holistic approach to learning is known to develop keen thinkers with high emotional intelligence.

It is this sort of government-university collaboration that is needed to make the impacts at the scale necessary to keep future businesses competitive and to keep future workers employable. Worldwide, higher education institutions need to adapt in similar ways.

A new kind of content depth is also necessary across higher education, which emphasises adaptive learning skills and combines the interdisciplinary study of current affairs with learning opportunities outside the classroom. An example is Yale-NUS College’s new major in global affairs, which I designed. This is an interdisciplinary programme that studies the networks and processes of globalisation and empirically explores international and highly complex issues, such as finance, climate change and human trafficking. The complexity of the problems we face as a global society demands thinkers who understand the nuanced connections between societies and the gaps that divide them.

What is unique about how this is approached at Yale-NUS is that students are considering the unknowns brought on by the fourth industrial revolution while they are researching, writing and working in internships. They are encouraged to fail, try new approaches and expect the unexpected. All the core courses in the global affairs curriculum are designed with higher order thinking – as defined according to Bloom’s taxonomy – integrated into the assignments. They emphasise not only the students’ knowledge base (facts, concepts, procedures and wider, contextual knowledge) but also their cognitive skills. This combination creates people who have the ability to learn and who are conscious of that capacity.

The disruption of global labour markets does not have to be a bad thing. It can create new spaces for creativity in the workplace and in private life. And, just as previous industrial revolutions have done, it will also create new jobs – albeit more slowly and in smaller numbers than we would like. The trick for higher education institutions will be to make sure their students are best placed to fill those jobs. And the time to begin considering what that means for staffing, course structure and course content is now.

Author Bio: Nancy W. Gleason is a senior lecturer in global affairs at Yale-NUS College in Singapore. She is also associate director of the Centre for Teaching and Learning at the institution, where she is partly responsible for curriculum development.