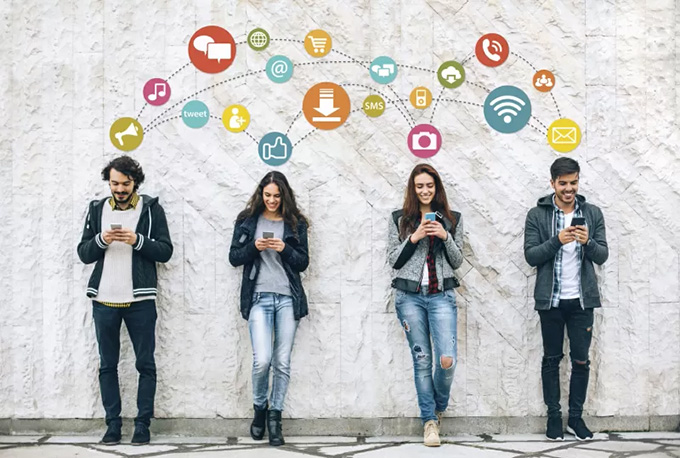 Adolescence is a stage marked by the construction and consolidation of one’s identity and personality. During this period, the peer group and social relationships play a leading role. Hence, the incursion and massive expansion of social networks is of great importance in the development of adolescents.

Classical authors like Erikson have already postulated that, throughout adolescence, we need to develop certain qualities. Among them, competition, fidelity, loyalty and the ability to love.

To do so, you must learn your own and cultural tools. Skills that allow establishing relationships with the environment in a period of important changes, decisions and risk taking. Also taking into account a context of maximum demand, given the high expectations placed on them.

A failure to acquire these personal qualities leads to significant psycho-emotional problems in adulthood. Situation in which self-criticism, indecision, insecurity, mistrust and relational anxiety predominate.

This development of identity is not easy. Sometimes we need to face significant personal difficulties in order to be successful at each stage.

Social networks penalize the exposure of these difficulties. They reward the demonstration of the kindest face in life. Thus, the current adolescent builds his identity with an absolute need to be accepted in them , with the consequent demand to show an idealized image of himself.

This has had a negative impact on both the way you look and show yourself. Problems related to impulse control, one’s own body image, or the management of complicated emotions, such as sadness or anger, have spread among adolescents.

Family, education and networks on the Internet

The role of the family is more important than ever in this process of social development. However, on many occasions, it is the adolescent who must educate her in the use of social networks. This is why the family is also not serving as a real trigger for the risks inherent in its use and abuse.

Furthermore, the role of the family in the adolescent’s life is in the process of being reconstituted. This causes an increase in conflict in family relationships that it is necessary to learn to resolve in order to return to this protective function of the adolescent’s individual development.

What role does friendship play?

In this context of development, friendship becomes an essential axis. During adolescence, we learn to define our concept of friendship as the first affective relationship outside the family environment.

Thanks to this link we learn to resolve conflicts constructively. In fact, on many occasions, friends are the mirror where we look at the suitability of our actions and our way of being.

As in any type of relationship, communication is key to making it work.

It is easy to understand that live and virtual communication are different. In this sense, social networks have completely transformed the concept of friendship of our adolescents, seriously damaging their social and communication skills.

The friendship building channels have changed. Also the ability to genuinely show up in the relationship has been affected by the massive expansion of social media.

Social networks also interfere with the conception of sexual relations

Another important aspect linked to the construction of one’s own identity and the establishment of friendship ties is related to sexual awakening and romantic relationships among adolescents.

Often the first love relationships, sexual or couple, arise from the group of friends. These have also been seriously affected by the massive use of social networks.

In the end, both the guiding principles and the conceptualizations of what is legitimate in a relationship are determined by the reality exposed in them.

The impossibility of filtering the entire transmission of values ​​in this context has contributed to an increase in gender-based violence among adolescents . Some of the factors that influence the situation are the accessibility to aggressions, the normalization of violence or the de-virtualization of key concepts such as fidelity, respect or love.

Ultimately, social networks have become the most widespread non-substance addiction among adolescents .

Much of the difficulties they face every day are related to their abuse. In addition, it is common that there is no awareness of such dependence and that the effects are found indirectly in aspects such as school performance or mood.

Although not everything in its use is negative , it is necessary to maintain supervision by adults. The objective: to guarantee an adequate use that protects the correct development of the adolescent.