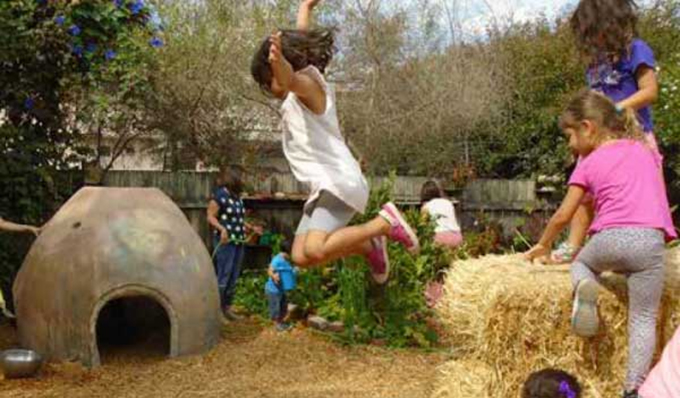 More than 80% of the French population is urban and, with it, the vast majority of schools. How then can most students be able to benefit from these open-air classes that we are talking about more and more? Can school in nature really become the educational revolution of the 21st century  ?

First, let’s remember that, if the term “nature” implies a place where greenery prevails over concrete, it is also important to pay attention to the small vegetated corners and parks present in the city. It is necessary to remember that under the tar there is earth.

Despite the urban densification, nature is present around us, all the time, whether it is a park, shared gardens, trees along an avenue or planted on roofs and even the sky where an invisible biodiversity lives (bacteria, fungi and yeasts transported by water droplets). The current policy of revegetation of urban spaces opens up new perspectives for teachers.

With the proliferation of strategic projects qualified as “nature city”, “green city” or “green and blue grid” , it is a question of developing a more resilient city, of limiting the consequences of global warming, which translates into by reducing urban heat islands, therefore by planting trees or installing green roofs. So many elements that are levers and resources for a school outside the city.

School outside the city, a real need

The enthusiasm for school outside cannot be reduced to the period of health crisis and confinement that we have experienced; teaching in nature and with nature is a necessity and a need. Indeed, beyond the idea of ​​nature deficit , studies show the interest of nature for psychic balances, health in general or creativity , fundamental elements for a harmonious education respectful of the needs and of the biological rhythm of children and adolescents .

The densification of cities has clearly reduced the links between human beings and their environments. Combined with growing sedentarization, confining children to cramped spaces, this development has only accelerated the gap between young children and nature, even as they aspire to move, run and enjoy spaces of Hobbies.

Curricula in most disciplines insist, particularly through environmental education, on knowledge of the links between human beings and nature. Marie Jacqué emphasizes the importance of teachers’ diverse conceptions of nature. It can indeed be the representation of a nature without the human species: a nature to be respected, to be preserved for itself. From this perspective, a sensitive approach to nature is preferred.

But nature can also be like an ecosystem to be understood in its relationships between living beings. This approach contributes skilfully to favoring cooperative teaching practices, exchanges with peers and mutual aid.

This evolution is not only school but thought on extracurricular times with the creation of the grounds of adventures , educational spaces allowing the children to appropriate natural spaces.

The class-walk represents one of the most emblematic and obvious activities of the school outside. It is part of French school history and a living school . At the beginning of the 20th  century, the pedagogues Élise and Célestin Freinet resumed this activity to make it an emblematic practice .of their pedagogy by giving it a multidisciplinary aim and allowing children to really be the actors of their learning. This walk is an opportunity to develop with children their sensitivity to the environment, and to encourage direct experimentation with nature. For the Freinet spouses, this activity is a lever for radically transforming the ways of teaching and learning by developing mutual aid, sharing and cooperation between children.

Today, it can be a tool for developing this school with nature in the city. Admittedly, the administrative measures sometimes make it difficult to leave a class outside, nevertheless the objective is not to go far, but rather to observe the nearby space where nature is present in all its forms.

The current movement of revegetation of playgrounds is an opportunity to develop the school outside within the establishments themselves. The advantages are not limited to imagining a flexibility of learning places, but to developing more resilient spaces in the face of global warming. This also makes it possible to fight against the risk of flooding in certain cities and to create movement corridors for animal species.

Going from the paved courtyard to the naturalized courtyard, bringing nature into the courtyard is an opportunity to rethink teaching practices, by developing a vegetable patch, a garden, by implementing disciplinary or multidisciplinary projects at all levels from first to of the second degree. Easy access, the absence of specific administrative measures are all means of transforming these vegetated spaces into pivots in the construction of learning, with times for reading but also for calculation or simply for resting in nature during meridian breaks.

Transforming the way you teach involves deep reflection on what you want and can do. It is a velvet revolution in the sense that in the end, it is not a question of changes falling within a break with his previous teaching but of a fluid and complementary process.

Author Bio: Sylvain Wagner is University Professor in Educational Sciences, Faculty of Education at the University of Montpellier

This article was co-written with Corine Martel, educational advisor and director of the EducNatu’re center in Restinclières and lecturer at the Faculty of Education of the University of Montpellier.