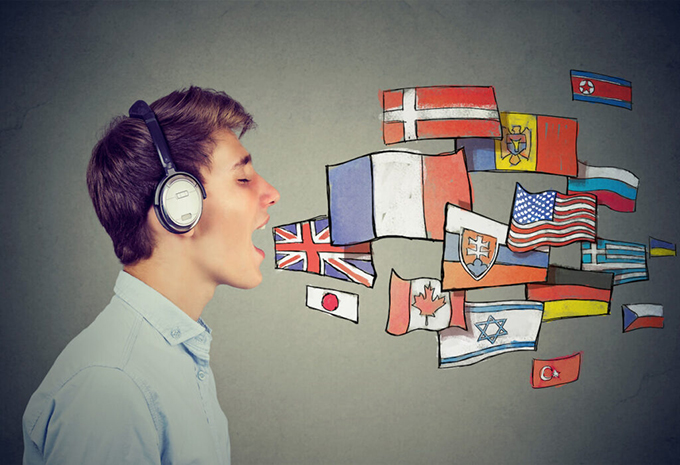 Set up in 2001, then amplified in 2018, the Common European Framework of Reference for Languages ​​of the Council of Europe, highlighted five important skills in mastering a language  : oral production, oral comprehension, written production, written comprehension and interaction that we often tend to forget.

In reality, for the same level of language, individuals do not have a balanced relationship between these skills: a learner of Spanish may have a very good written understanding of this language, due to its proximity to French, but be more difficult during oral interactions, for socio-pragmatic issues (for example, when it comes to greeting a person in an informal context and you only know the classic greeting formulas, it can be difficult to adapt).

This asymmetrical evolution can cause a feeling of frustration in learners who are able to understand complex texts, without however being able to demonstrate this understanding in the same foreign language.

It is all the more difficult for learners who have just arrived in a country and are discovering one of its languages ​​– or pupils starting a foreign language, when they are asked not to use their language(s) (s) first (s) within the framework of the class.

However, the example of the reading-comprehension method, practiced in Argentina, shows that multilingualism in the classroom could be an asset, under certain conditions. What exactly is this method? How could we draw inspiration from it in other countries and other contexts?

Reading-comprehension consists of reading a text in the language you are learning and reproducing it in your first language. Considering it as an educational activity amounts to defining reading as a complex social practice , which is not limited to the decoding of written forms. Also, reading-comprehension courses are intended to help learners become autonomous readers of a foreign language, as Estela Klett, Argentinian specialist on the subject, reminds us.

In Argentina, these courses are intended for a Spanish-speaking university public, generally beginners in a foreign language or without proficiency in the target language, “but who have significant reading experience”.

The recognition of these reading practices is particularly relevant when the part of the timetable devoted to the foreign language is very small and when the public begins in the target language, since this type of approach makes it possible to achieve results solid and rewarding in a short time. In 2001, the city of Buenos Aires tried to include this type of practice for high school but its impact was limited on the ground.

The courses are based on authentic texts – neither transformed nor cut – which come from the specialist disciplines of the learners (human sciences, exact sciences, etc.). Emphasis is placed on the different genres frequent in the academic field, whether in reading (textbook chapter, article) or in writing (summary, synthesis, dissertation). Reading guides with instructions make it possible to orient the construction of meaning without constraining it.

It should be noted that, generally, written production, which follows comprehension, takes place in the learner’s first language, which is Spanish in Argentina. It is a question of taking advantage of the mastery of the first language to account for the understanding of the texts. This type of approach recognizes that the development of the written production capacity required to express subtleties, arguments and concepts takes more time than that of comprehension.

Consequently, an activity which is carried out in a foreign language in reception and in the first language in production makes it possible to pose the idea of ​​a “plurilingual literacy” because, to understand a statement, the learner will mobilize all his resources in terms of of language-cultures.

In the Argentine contextual landscape, therefore exolingual – that is to say that French is not the national language there – reading-comprehension courses are privileged spaces for cross-cultural encounters. Thus learners create their relationship to “foreign culture confronting universes of thought, categories and gazes, in short, experiencing otherness […] accompanied by the discovery of oneself”, according to Rosana Pasquale, Argentine researcher . The texts then function as mediators between its cultures and new cultures.

Reading-comprehension courses in Argentinian universities emerged around the middle of the 20th century , when the separation of activities around the practice of languages ​​(reading, writing, listening, speaking) was unthinkable, even a taboo. With the increase in exports at the turn of the Second World War, the economic and social situation in Argentina improved and the schooling rate increased, while the installation of Spanish publishing houses which had fled the Franco’s dictatorship in Spain accelerated the distribution of the book.

But one of the main reasons is cultural. Between 1880 and 1930, the relationship between Argentina and France was very close. Around the 1950s and 60s, the attraction for this language persisted, which required revising the means of teaching it. And it is in the context of a tense debate between the use or prohibition of the first language in the learning of foreign languages ​​that university reading courses in French as a foreign language are part of the study plans of the different course in the humanities.

The origins of these courses would then date back to 1953, with the “free courses” of French, at the Faculty of Philosophy and Letters of the University of Buenos Aires, which aimed at the reading-explanation-translation of literary texts. These courses were innovative because they sought from the needs and profile of the learners . It was only around 1985 that the first change occurred when the literary texts were replaced by texts from the disciplines dispensed.

It was also at this time that the term reading-comprehension was born, a compound term that considers the act of reading from the point of view of the act of understanding. From the beginning of the 2000s, the great influence of the CEFR in Argentina accompanies this evolution by introducing the action perspective thanks to which class activities become tasks, i.e. problems to be solved in context.

Some concerns have been expressed in relation to this practice, pointing out that reading would lead to the development of partial competence because it does not require the ability to understand in order to then produce in the same foreign language. However, it can be noted that the notion of partial competence can also have a positive meaning. It does not focus on the skills that the learner lacks, but on the existence of a complex, asymmetrical repertoire adapted to their social needs for Coste, Moore and Zarate, researchers on multilingualism.

For Argentine specialists in the field , French continues to develop in the university environment, becoming the main orientation there, while it tends to decline in the rest of the education system through the regular closing of classes at the  Profesorado – the school of training future teachers.

In an exolingual and university context, this focus on reading-comprehension, having caused concerns at its beginnings, and sometimes still misunderstood today since it breaks down language skills, becomes a remarkable fact in the region. On the strength of this recognition, it is also developing in other languages ​​such as English or German .